What is free verse? Here’s a quick and simple definition:

Free verse is the name given to poetry that doesn’t use any strict meter or rhyme scheme. Because it has no set meter, poems written in free verse can have lines of any length, from a single word to much longer. William Carlos Williams’s short poem “The Red Wheelbarrow” is written in free verse. It reads: “so much depends / upon / a red wheel / barrow / glazed with rain / water / beside the white / chickens.”

In order to understand free verse in more depth, it’s helpful to have a strong grasp of a few other literary terms related to poetry. We cover each of these in depth on their own respective pages, but below is a quick overview to help make understanding blank verse easier.

For instance, TS Elliot’s “The Love Song of J. Alfred Prufrock” is a famous free verse poem in which many lines end in rhyme, but those rhymes don't follow any particular pattern (or rhyme scheme) and the poem follows no particular meter. Similarly, Walt Whitman was known to occasionally lapse in and out of using meter in his unrhymed poetry—but for the most part his poems don’t make use of meter, so they’re still considered free verse.

While some types of formal verse have specific requirements for the length or number of stanzas, free verse has no such restrictions. A poet writing in free verse may use stanzas of regular length consistently throughout their poem, though more often than not the length of stanzas in free verse poems varies at least somewhat throughout the poem—which is just to say that they don't follow any rule in particular.

This famous free verse poem by T.S. Eliot rhymes, but not according to any particular pattern, and it doesn’t use meter (note how varied the line lengths are). Here's an excerpt:

Let us go then, you and I,
When the evening is spread out against the sky
Like a patient etherized upon a table;
Let us go, through certain half-deserted streets,
The muttering retreats
Of restless nights in one-night cheap hotels
And sawdust restaurants with oyster-shells:
Streets that follow like a tedious argument
Of insidious intent
To lead you to an overwhelming question ...
Oh, do not ask, “What is it?”
Let us go and make our visit.

Walt Whitman is best known for writing free verse, but he often injected metered lines into his free verse sporadically. Here the second line is a near-perfect line of dactylic hexameter (six feet of stressed-unstressed-unstressed syllables) that appears seemingly out of the blue. The lines before and after this example are not dactylic at all.

E.E. Cummings's "[i carry your heart with me(i carry it in]"

E.E. Cummings was famous for pushing the boundaries of what many readers would have even recognized as poetry at the time when he was writing. Written in free verse, the formal inventiveness of his poetry bucks many other poetic conventions as well, including the use of proper punctuation and normal rules of indentation. [i carry your heart with me(i carry it in] is one of his more well-known poems, and it uses rhyme irregularly throughout. This excerpt contains the poem's first two stanzas:

i carry your heart with me(i carry it in
my heart)i am never without it(anywhere
i go you go,my dear;and whatever is done
by only me is your doing,my darling)
i fear
no fate(for you are my fate,my sweet)i want
no world(for beautiful you are my world,my true)
and it’s you are whatever a moon has always meant
and whatever a sun will always sing is you

William Carlos Williams's "This Is Just To Say"

Williams's writing is a good example of the incredibly spare, restrained style that can be achieved through free verse—in this case, by using very short lines to heighten language that might otherwise seem perfectly ordinary and unremarkable. Here are the first two stanzas of his famous poem, "This is Just to Say":

I have eaten
the plums
that were
in the icebox

and which
you were probably
saving
for breakfast

Why Do Writers Use Free Verse?

Generally speaking, formal verse gradually fell out of fashion with poets over the course of the 20th century. This was in part because, as literacy levels rose, meter and rhyme (which originated as formal features to aid in memorization and comprehension) no longer seemed necessary.

But free verse was also attractive to poets simply because it lacked the restrictions and constraints imposed on poetry by meter and rhyme, and therefore left it to the poet to determine the form his or her poem would take—and to invent his or her own restrictions and constraints. Today, it could be said that the main reason most poets write in free verse is simply that it has become the norm, in much the same way that formal and blank verse were once the norm.

While free verse lacks some of the restraints of formal and blank verse, it still involves all the elements that make up the form of a poem (including diction, syntax, lineation, stanza, rhythm, and the many different types of rhyme). It's just that there aren't any rules governing how they must be used. 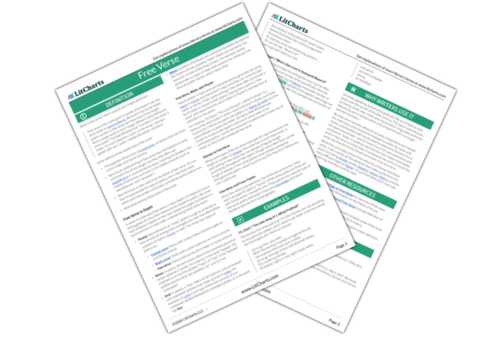