What is polyptoton? Here’s a quick and simple definition:

Polyptoton is a figure of speech that involves the repetition of words derived from the same root (such as "blood" and "bleed"). For instance, the question, "Who shall watch the watchmen?" is an example of polyptoton because it includes both "watch" and "watchmen."

Some additional key details about polyptoton:

How to Pronounce Polyptoton

Here's how to pronounce polyptoton: puh-lip-toe-tahn

Polyptoton most often appears within a single sentence, as in the example given earlier: "Who shall watch the watchmen?" In fact, some rhetoricians would argue that polyptoton can only occur if the repeated words are in close proximity to each other.

However, some literary critics treat polyptoton as something that can occur over longer stretches of text, whether a paragraph, an essay, or even a book. The example given most often for this sort of polyptoton is the novel Frankenstein. In the book, Mary Shelley describes the monster that Frankenstein creates as a wretch, and then carefully uses words with the same root (wretched, wretchedly, wretchedness) throughout the book.

Polyptoton is found in literature of all sorts, from Shakespeare's plays to 20th century poetry, from speeches to witty remarks.

Polyptoton in Shakespeare's Troilus and Cressida

In Shakespeare's play Troilus and Cressida, the character Troilus uses polyptoton three times in two lines. In all three cases, the repetition emphasizes the might of the Greeks:

The Greeks are strong and skillful to their strength,
Fierce to their skill and to their fierceness valiant;

Shakespeare also uses polyptoton in Richard II. In the line below, he uses three different versions of words with the same root as "food."

Polyptoton in a Famous Quote from Lord Action

Lord Acton was an English politician, writer, and historian. While he lived a remarkable life, he is best known today for his famous and insightful quote about the nature of power. The quote also happens to be an excellent example of polyptoton:

Note that the statement also uses other forms of repetition (repeating both "power" and "corrupt"), but only the repetition of "absolute" and "absolutely" is polyptoton.

Though there is much debate about JFK's quality as a president, he was generally admired as an orator. In this line from his inaugural address, he uses polypton to acknowledge that the United States was in a cold war with the USSR while also calling on American citizens to act for reasons beyond that battle:

Not as a call to battle, though embattled we are.

T.S. Eliot's "The Dry Salvages" is a long poem written during World War II. At one point, in just six lines of the poem he uses four different examples of polyptoton. Through the repetition the poem emphasizes the meaninglessness and emptiness that Eliot saw in British and Western culture as well as the destruction of the war.

There is no end of it, the voiceless wailing,
No end to the withering of withered flowers,
To the movement of pain that is painless and motionless,
To the drift of the sea and the drifting wreckage,
The bone’s prayer to Death its God. Only the hardly, barely prayable
Prayer of the one Annunciation.

Why Do Writers Use Polyptoton?

Depending on the context of how it's used, polyptoton can offer writers a variety of different effects:

More broadly, then, polyptoton offers a writer a way to imply both connection and difference simultaneously. 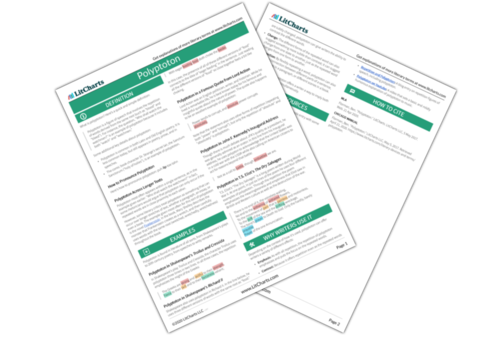