What is polysyndeton? Here’s a quick and simple definition:

Polysyndeton is a figure of speech in which coordinating conjunctions—words such as "and," "or," and "but" that join other words or clauses in a sentence into relationships of equal importance—are used several times in close succession, particularly where conjunctions would normally not be present at all. For instance, the following sentence contains polysyndeton: "We ate roast beef and squash and biscuits and potatoes and corn and cheese and cherry pie."

Some additional key details about polysyndeton:

A Primer on Coordinating Conjunctions and Polysyndeton

To more fully understand polysyndeton, it's helpful to understand the basics of what coordinating conjunctions are. To put it simply, conjunctions in general are words that join parts of a sentence and, in joining them, define a relationship between those parts. Those relationships can be equal or unequal:

Polysyndeton can appear within a single sentence, but it can also appear as a series of independent sentences. This passage from Edgar Allan Poe's story "Silence" contains polysyndeton within individual sentences and between sentences (note "And the lynx..."):

Polysyndeton is related to two other figures of speech, asyndeton and syndeton, that have to do with how many conjunctions are used to coordinate the words or clauses of a sentence. It is also related to parataxis, which, like polysyndeton, joins ideas in relationships of equal importance.

The prefix "a" means "not" or "without," so asyndeton means that conjunctions have been omitted where they would normally appear. Asyndeton, then, is essentially the opposite of polysyndeton. Asyndeton can achieve some of the same effects of emphasis as polysyndeton can, but it is also unique in its ability to speed up the pace of a narrative and eliminate implications of hierarchy. There is a good example of both qualities in Joseph Conrad's novel Heart of Darkness:

"An empty stream, a great silence, an impenetrable forest. The air was thick, warm, heavy, sluggish."

By eliminating the "and" in these sentences, the pace is quickened. The reader is not asked to see a sequence of sights; the hierarchy is eliminated, and all of these sensations and objects should be seen and experienced at once. Because of asyndeton, the reader experiences the same overwhelming sense of the jungle that the narrator is experiencing.

Syndeton refers to sentences that have a single conjunction between the parts of the sentence being joined. The word comes from the Greek, sundetos, which means "bound together with." "Why were you late, unprepared, and wearing the wrong uniform?" is an example of syndeton. Put another way, syndeton is how conjunctions are normally handled, and polysyndeton and asyndeton are departures from that normal construction.

Parataxis is another figure of speech that's related to polysyndeton. The word parataxis comes from the Greek and means "placing side by side." In parataxis, words, phrases, clauses, or sentences are placed next to each other with equal weight, such that none are subordinated to another. Sometimes these different elements of a sentence are linked as equals using coordinating conjunctions.

So while parataxis focuses on the equality of elements and polysyndeton focuses on the inclusion of an abundance of conjunctions, the two devices can often overlap. There's a good example of this in a description from Joan Didion's book of essays, Slouching Toward Bethlehem:

"I was late to meet someone but I stopped at Lexington Avenue and bought a peach and stood on the corner eating it and knew that I had come out of the West and reached the mirage. I could taste the peach and feel the soft air blowing from a subway grating on my legs and I could smell lilac and garbage and expensive perfume..."

Polysyndeton appears frequently in everyday speech as an unconscious habit, but it is also often used purposefully by writers, orators, and musicians for stylistic effects.

Examples of Polysyndeton in Literature

Because polysyndeton is a common habit of everyday speech, writers often use it to create realistic dialects for their characters, especially when those characters are young or exhibit a childlike excitement. It can also be used to slow down the pace of a passage, or to create an onslaught of description such that the reader experiences a sense of being overwhelmed. Polysyndeton is also prevalent in the Bible, though for that same reason some critics might say that polysyndetons, when overused, can make a story feel didactic or stilted.

In this example from Carson McCullers's novel The Member of the Wedding, polysyndeton allows the reader to enter the frame of mind of the novel's protagonist, Frankie:

"It was four o'clock in the afternoon and the kitchen was square and gray and quiet. Frankie sat at the table with her eyes half closed, and she thought about a wedding."

By placing an "and" between "square" and "gray" and again between "gray" and "quiet," the kitchen is described gradually. A slower pace makes sense for this scene, where 12-year-old Frankie experiences an epiphany. Perhaps this can be best imagined in terms of film: a character has a realization, and slowly, the camera pans around the room as the character becomes hyper aware of their surroundings, and subsequently, their thoughts.

In this example from Act 3, Scene 3 of Shakespeare's Othello, polysyndeton is used for a short but exhausting list:

"If there be cords, or knives, or poison, or fire, or suffocating streams, I'll not endure it."

Here, Shakespeare only lists five possibilities of punishment. However, because of the repeated "or," the items in the list seem to pile up and the entire list feels much longer, making it almost exhausting to read. In this moment, Othello is just beginning to believe that his wife Desdemona might be unfaithful (because Iago is tricking him into thinking such things). The way that polysyndeton makes the list seem overwhelming captures how Othello himself is unable to escape his feverish fears of his wife's infidelity.

Examples of Polysyndeton in Music

Polysyndeton regularly appears in song lyrics. Because it sounds like regular speech and, at the same time, gives that speech a sense of rhythm and emphasis through repeated conjunctions, polysyndeton offers many valuable effects for songwriting.

Amy Winehouse famously recorded a cover of the song "Valerie" (originally by The Zutons) for her Back to Black album. This song shows how polysyndeton can create a natural rhythm:

"Well, sometimes I go out by myself / And I look across the water / And I think of all the things / What you're doing / And in my head I paint a picture."

This is the first chorus in a song about missing a loved one. If the conjunction "and" were not repeated, the pace would be significantly faster and would not give the listener time to linger in this feeling of longing.

Dylan's song "Masters of War" shows how polysyndeton can be used to build a specific emotion:

Anger and disgust are palpable in the final lines of Bob Dylan's song of protest against the politicians behind the Vietnam War. By using polysyndeton, Dylan continues to add phrase after phrase, far beyond where listeners might expect him to stop, to fully communicate the depth of his fury and his hatred for the politicians he calls the "masters of war."

Examples of Polysyndeton in Speeches

Edgar Allan Poe once said that polysyndeton adds dignity to what we say, a bit like the slow motion of a ceremony. These are desirable qualities for most orators, who seek to deliver a speech that is memorable, powerful, and imparts a specific, desired message.

Polysyndeton in President Ronald Reagan's Speech on the Challenger Disaster

We will always remember them, these skilled professionals, scientists and adventurers, these artists and teachers and family men and women, and we will cherish each of their stories—stories of triumph and bravery, stories of true American heroes.

Polysyndeton inserts natural pauses into the speech. The breaks give the reader time to envision these victims as a diverse group of individuals, who had families, professions, and goals. Through polysyndeton, Reagain was able to communicate the human scale of the tragedy.

In this example from Ursula K. Le Guin's commencement address, the irregular structure of polysyndeton emphasizes certain words to activate a particular emotion:

"And when you fail, and are defeated, and in pain, and in the dark, then I hope you will remember that darkness is your country, where you live, where no wars are fought and no wars are won, but where the future is."

This structure highlights the terms "fail," "defeated," "pain," and "dark." This might initially seem like an odd choice for a commencement address, which is typically expected to uplift and galvanize graduates, but Le Guin masterfully focuses on inevitable failure and darkness in order to bring her audience toward hope. Thus, Le Guin's use of polysyndeton makes the graduating students see that failure and pain are inevitable parts of life, and that the willingness to experience failure and pain is a prerequisite to humility, peace, and progress.

Why Do Writers Use Polysyndeton?

Writers use polysyndeton for a variety of different effects and purposes, depending upon the context. The more common reasons include:

Check out these resources on other sites for even more information about polysyndeton. 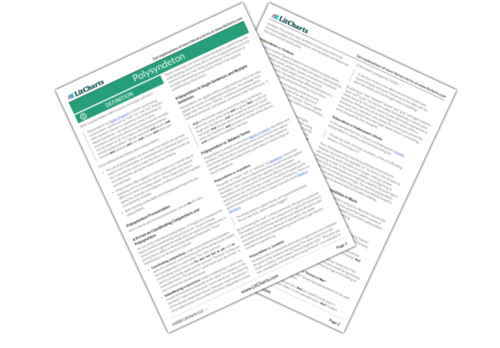