What is rhyme? Here’s a quick and simple definition:

A rhyme is a repetition of similar sounds in two or more words. Rhyming is particularly common in many types of poetry, especially at the ends of lines, and is a requirement in formal verse. The most familiar and widely-used form of rhyming is perfect rhyme, in which the stressed syllables of the words, along with all subsequent syllables, share identical sounds, as in "pencil" and "stencil." Perfect rhyme is so common, in fact, that the word "rhyme" is often used simply to refer to perfect rhymes. However, there are actually a variety of other types of rhymes, such as imperfect rhyme or slant rhyme, which also involve the repetition of similar sounds but in ways that are not quite as precise as perfect rhyme.

Some additional key details about rhyme:

Here's how to pronounce rhyme: rime

Perfect rhymes and imperfect rhymes are two important types of rhyme that are defined according to the sounds that they share as well as where the rhyme falls in relation to the stressed syllable in each word (that is, the syllable that receives the emphasis, such as "fine" in the word "de-fine"). Here's the definition of each, with examples:

Another way of classifying types of rhymes focuses more on sound than it does on stressed syllables:

Classifying Rhymes by Their Placement Within Lines

In addition to the categories above, which describe rhymes based on the types of sounds they have in common, rhymes can also be described by their location within a line of poetry.

These categories are generally used in conjunction with the categories we've already covered, not instead of them. So, for instance, a certain rhyme might be described as "internal pararhyme," or "identical end rhyme."

In formal verse (which is the name given to rhymed poetry that uses a strict meter), end rhymes typically repeat according to a pattern called a rhyme scheme. Rhyme schemes are described using letters of the alphabet, so that each line of verse that corresponds to a specific type of rhyme used in the poem is assigned a letter, beginning with "A." For example, a four-line poem in which the first line rhymes with the third, and the second line rhymes with the fourth has the rhyme scheme ABAB, as in the lines below from the poem To Anthea, who may Command him Anything by Robert Herrick:

Although all formal verse poems have some sort of rhyme scheme, certain forms of poetry have a pre-determined rhyme scheme, such as the sonnet or the villanelle. Poets wanting to write such poems have to match the rhyme scheme they use to that defined by the type of poem in question.

When I consider how my light is spent,
Ere half my days, in this dark world and wide,
And that one Talent which is death to hide
Lodged with me useless, though my Soul more bent
To serve therewith my Maker, and present
My true account, lest he returning chide;
“Doth God exact day-labour, light denied?”
I fondly ask. But patience, to prevent
That murmur, soon replies, “God doth not need
Either man’s work or his own gifts; who best
Bear his mild yoke, they serve him best. His state
Is Kingly. Thousands at his bidding speed
And post o’er Land and Ocean without rest:
They also serve who only stand and wait.”

Internal Rhyme and Alliteration in Edgar Allen Poe's "The Raven"

Once upon a midnight dreary, while I pondered, weak and weary,
Over many a quaint and curious volume of forgotten lore—
While I nodded, nearly napping, suddenly there came a tapping,
As of some one gently rapping, rapping at my chamber door.
“’Tis some visitor,” I muttered, “tapping at my chamber door—
Only this and nothing more.”

Eye rhymes (rhymes that sound different but use the same spelling) are far more common in English verse prior to the 19th century, when the convention fell out of favor with many writers. Also worth nothing is that many older examples of eye rhyme occur not because the author originally intended them but because the way that words are pronounced changes over time.

All men make faults, and even I in this,
Authorizing thy trespass with compare,
Myself corrupting salving thy amiss,
Excusing thy sins more than thy sins are...

This poem by W.B. Yeats gives an example of slant rhyme, since "moon" and "on" don't rhyme perfectly but end in the same consonant, while "bodies" and "ladies" don't use the same sounds in their stressed syllables, but end with identical unstressed syllables. Here are the first four lines of the poem:

When have I last looked on
The round green eyes and the long wavering bodies
Of the dark leopards of the moon?
All the wild witches, those most noble ladies

Notice, too, the poet's use of alliteration in the phrase "wild witches."

It's pretty common for songwriters to use slant rhymes in addition to perfect rhymes—especially in rap. This 1989 track by Big Daddy Kane gives an expert example of complex rhyme that makes use of dactylic as well as double slant rhyme. If that's confusing, don't worry—all you need to know is that these slant rhymes are almost perfect (meaning they use assonance instead of identical sounds). The first highlighted example is dactylic because the final three syllables of both lines rhyme and have the same stress pattern (stressed-unstressed-stressed), whereas the second highlighted example is double because the final two syllables of the lines rhyme and also share the same stress pattern (stressed-unstressed).

The heat is on so feel the fire
Come off the empire, on a more higher
Level than def, one step beyond dope
The suckers all scope and hope to cope but nope
Cause I can never let 'em on top of me
I play 'em out like a game of Monopoly
Let 'em speed around the board like an Astro
Then send 'em to jail for trying to pass Go
Shaking 'em up, breaking 'em up, taking no stuff
But it still ain't loud enough

Note how Kane here creates his slant rhymes not through simple pairs of words, but by sometimes matching sets of words ("on top of me") with single words that make up the same number of syllables ("monopoly").

Forced Rhyme in Milton's "How soon hath Time, the subtle thief of youth"

This excerpt from a poem by John Milton is a good example of forced rhyme, since the poet had to alter the spelling of two different words in order to make them seem to rhyme with the word "youth."

How soon hath Time, the subtle thief of youth,
Stol'n on his wing my three-and-twentieth year!
My hasting days fly on with full career,
But my late spring no bud or blossom shew'th.
Perhaps my semblance might deceive the truth
That I to manhood am arriv'd so near;
And inward ripeness doth much less appear,
That some more timely-happy spirits endu'th.

"Shew'th" (meaning: "shows") and "endu'th" (meaning: "endures") are the forced rhymes in this example. Notice, too, how the syntax in line 4 is slightly unusual: it would be more natural to have written "But my late spring shows no bud or blossom." The awkward phrasing of the line is a further indication that the rhyme in it is forced.

This example makes unusual use of enjambment (a line break without punctuation) to split the word "nightgown" in half so it rhymes with "white"—an example of broken rhyme. The rhyme scheme here is ABAB.

When he walks in waterproof white,
The children run after him so!
Calling out, "He's gone out in his night-
Gown, that crazy old Englishman, oh!"

Why Do Writers Use Rhyme?

Writers use rhyme because it makes language sound more beautiful and thoughtfully-composed, like music. Especially in formal verse (since it uses a strict meter), rhymes repeat at regular intervals, dramatically increasing the rhythm and musicality of poetry and thus making it not only more pleasant to listen to but easier to understand and more memorable.

While strict rhyme schemes may have fallen out of favor with many poets writing today—who prefer free verse to the more constraining forms of formal verse—more subtle forms of rhyme (such as assonance) remain ever popular for increasing the aesthetic quality of a poetic composition. In addition to poetry, rhyme is common in riddles, nursery rhymes, jokes, and children's books, since it also aids in memorization. It's also common in song lyrics, for many of the same reasons it's popular in poetry. 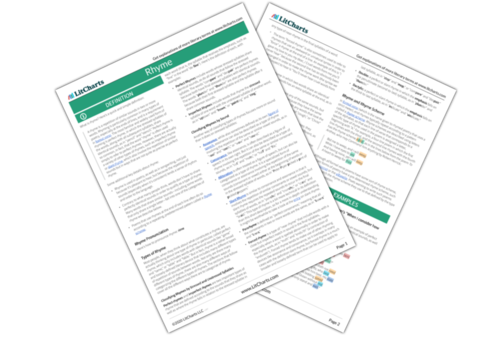