What is a conceit? Here’s a quick and simple definition:

A conceit is a fanciful metaphor, especially a highly elaborate or extended metaphor in which an unlikely, far-fetched, or strained comparison is made between two things. A famous example comes from John Donne's poem, "A Valediction: Forbidding Mourning," in which two lovers are compared to the two points of a compass (the drawing tool) using a long and elaborate metaphor.

Some additional key details about conceits:

Here's how to pronounce conceit: kun-seat

The term conceit is closely related to the term extended metaphor. In fact, today the two terms are often used interchangeably, and that usage is not incorrect. At the same time, conceit also has an additional more technical meaning, and so, sometimes, conceit will mean something slightly different from the meaning of extended metaphor.

Take a look at our entry on extended metaphor for more information on the broader use of the word conceit. The rest of this entry will focus on the the more technical definition of the term conceit.

The History of Conceit

Conceits first came to prominence in 14th and 15th century Renaissance literature, when poets began using them in Petrarchan sonnets (14-line love poems). Most often in these poems, conceits were used to compare their lovers to beautiful things in nature. During that time, conceit did not at all carry a negative connotation—it was simply an elaborate and fanciful extended metaphor.

When scholars discuss the more technical definition of conceits, they usually break up conceits into two main types:

While these two types of conceits are certainly the most common, there are conceits that fit into neither of these categories. Emily Dickinson, for instance, is a poet who sometimes used conceits that were neither Petrarchan nor metaphysical. Further, her conceits would not be described by nearly anyone as being strained, even if they are elaborate.

Example of Conceit in Spenser's "Epithalamion"

This long poem by Edmund Spenser makes use of Petrarchan conceit throughout. Here, the lover is compared to an elegant building (so it's fair to say this is also an example of a slightly forced or absurd comparison).

Her snowie necke lyke to a marble towre,
And all her body like a pallace fayre,
Ascending uppe with many a stately stayre,
To honors seat and chastities sweet bowre.

Example of Conceit in Sidney's "Song from Arcadia"

Sir Philip Sidney uses the familiar figurative language of "giving someone your heart" as the basis of the conceit of this poem. He extends the metaphor throughout the poem, almost to the point of absurdity, getting about as much mileage out of such a simple metaphor as seems possible. This is a Petrarchan conceit—a fact which is hinted at not just by the romantic nature of the comparison being made, but by the poem's form, which is a sonnet.

My true-love hath my heart and I have his,
By just exchange one for the other given:
I hold his dear, and mine he cannot miss;
There never was a bargain better driven.
His heart in me keeps me and him in one;
My heart in him his thoughts and senses guides:
He loves my heart, for once it was his own;
I cherish his because in me it bides.
His heart his wound received from my sight;
My heart was wounded with his wounded heart;
For as from me on him his hurt did light,
So still, methought, in me his hurt did smart:
Both equal hurt, in this change sought our bliss,
My true love hath my heart and I have his.

By the 17th century, poetic conceits were seen as being so over-the-top that Shakespeare even wrote a sonnet that pointedly mocked the convention of using overblown or fanciful conceits. The poem itself has no overarching conceit of its own. Instead, throughout the poem Shakespeare pokes fun at the sorts of ridiculous comparisons made by Petrarchan sonnets that do contain conceits.

My mistress’ eyes are nothing like the sun;
Coral is far more red than her lips’ red;
If snow be white, why then her breasts are dun;
If hairs be wires, black wires grow on her head.
I have seen roses damask’d, red and white,
But no such roses see I in her cheeks;
And in some perfumes is there more delight
Than in the breath that from my mistress reeks.
I love to hear her speak, yet well I know
That music hath a far more pleasing sound;
I grant I never saw a goddess go;
My mistress, when she walks, treads on the ground.
And yet, by heaven, I think my love as rare
As any she belied with false compare.

Example of Conceit in Donne's "The Flea"

In this poem, John Donne speaks at length to his beloved about a flea, first pointing out that the flea has sucked both their blood, and then arguing that, therefore, there is no excuse for her to be coy about physical intimacy—since their very blood has already been mingled inside the flea. Although the subject of the poem is ostensibly a flea, Donne is using the flea as a highly unlikely metaphor to proposition his beloved. This is an example of a metaphysical conceit.

Mark but this flea, and mark in this,
How little that which thou deniest me is;
It suck'd me first, and now sucks thee,
And in this flea our two bloods mingled be.
Thou know'st that this cannot be said
A sin, nor shame, nor loss of maidenhead;
﻿Yet this enjoys before it woo,
﻿And pamper'd swells with one blood made of two;
﻿And this, alas! is more than we would do.

Example of Conceit in Donne's "A Valediction: Forbidding Mourning"

The conceit of this poem by John Donne is that two lovers are described as the two points of a compass (the drawing tool), in which one lover is the point, the other is the point of a pen or pencil, one rotating around the other and both leaning toward each other . This is another example of a metaphysical conceit.

If they be two, they are two so
As stiff twin compasses are two,
Thy soul the fixed foot, makes no show
To move, but doth, if the other do.
And though it in the center sit,
Yet when the other far doth roam,
It leans, and hearkens after it,
And grows erect, as that comes home.

The conceit in this poem by Emily Dickinson is neither strained nor absurd, Petrarchan nor metaphysical. It's simply an unlikely extended metaphor that governs the structure of the entire poem (in which the poet goes for a carriage ride with Death). But it's a more modern (and therefore rarer) example of the use of conceit. This example is also a case in which the terms extended metaphor and conceit could easily and correctly be used interchangeably.

We slowly drove – He knew no haste
And I had put away
My labor and my leisure too,
For His Civility –

Or rather – He passed Us –
The Dews drew quivering and Chill –
For only Gossamer, my Gown –
My Tippet – only Tulle –

Why Do Writers Use Conceits?

Writers use conceits for many of the same reasons they use metaphors and extended metaphors:

A poet would generally use a Petrarchan conceit to lavish praise on their beloved, while they might use a metaphysical conceit to describe something (or explain an idea) using a novel comparison—one that might take some mental gymnastics to make sense of, but that would ultimately serve to both demonstrate the poet's ingenuity and give readers a new way of seeing the subject. 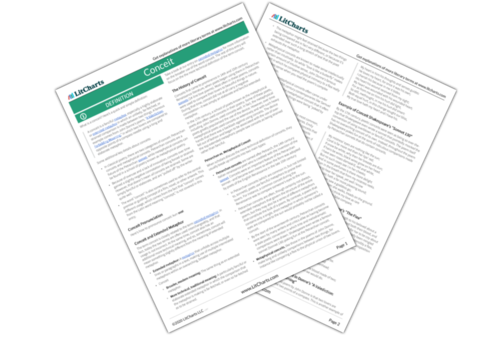