What is anthropomorphism? Here’s a quick and simple definition:

Anthropomorphism is the attribution of human characteristics, emotions, and behaviors to animals or other non-human things (including objects, plants, and supernatural beings). Some famous examples of anthropomorphism include Winnie the Pooh, the Little Engine that Could, and Simba from the movie The Lion King.

Some additional key details about anthropomorphism:

Here's how to pronounce anthropomorphism: an-thro-poh-more-fizz-um.

It's likely that some of your favorite stories from childhood made use of anthropomorphism in one way or another. Classic children's stories like The Tale of Peter Rabbit, The Berenstain Bears series, The Lion, The Witch, and the Wardrobe, and The Giving Tree all feature anthropomorphic characters. Anthropomorphism also features prominently in folk tales, mythology, and religious stories: for example, in the biblical book of Genesis, Eve is tempted into eating from the Tree of Knowledge by a talking serpent. Here are some other important facts about anthropomorphism:

Anthropomorphism is easy to confuse with a similar literary device called personification, but they're actually quite different. Here's a quick rundown of personification:

And here are the key differences between the two terms:

The following examples of anthropomorphism draw from children's books, novels, as well as film. In other words, anthropomorphism is quite common in all types literature and different media.

Anthropomorphism in Alice's Adventures in Wonderland by Lewis Carroll

Lewis Carroll used anthropomorphism to create many of the characters in Alice's Adventures in Wonderland. Midway through the novel, Alice, the protagonist, meets a large caterpillar who behaves very much like a human:

She stretched herself up on tiptoe and peeped over the edge and her eyes immediately met those of a large blue caterpillar, that was sitting on the top, with its arms folded, quietly smoking a long hookah and taking not the smallest notice of her or of anything else.

At last the Caterpillar took the hookah out of its mouth and addressed Alice in a languid, sleepy voice.

"Who are you?" said the Caterpillar.

The Caterpillar in Alice's Adventures in Wonderland is clearly not the kind of caterpillar you might find in your back yard: he smokes, he crosses his arms, he speaks slowly and in a slightly condescending tone. He acts like a human, and more specifically, like a wise and weary old professor.

The satirical novel, Animal Farm, is all about animals behaving like humans—both for better and for worse. At the beginning of the novel, a pig named Old Major encourages the other animals to rebel against the men running farm, using language reminiscent of Karl Marx's communist manifesto:

Man is the only real enemy we have. Remove Man from the scene, and the root cause of hunger and overwork is abolished for ever. Man is the only creature that consumes without producing. He does not give milk, he does not lay eggs, he is too weak to pull the plough, he cannot run fast enough to catch rabbits. Yet he is lord of all the animals. He sets them to work, he gives back to them the bare minimum that will prevent them from starving, and the rest he keeps for himself.

Yet once the pigs overthrow the men, they become tyrants who exploit the other animals in the same way that the men once exploited all the animals. In real life, pigs could not make political speeches or stage a rebellion, but in Animal Farm, they do. Orwell uses anthropomorphism to critique how the Soviet Union used Marxist ideology to oppress many people, rather than to free them. The hypocrisy of the pigs represents the Soviet Union's failure to create a state where power was truly in the hands of the people.

Markus Zusak's novel The Book Thief is narrated by the figure of Death, who kindly and frankly introduces himself to the reader as follows:

Where are my manners? I could introduce myself properly, but it’s not really necessary. You will know me well enough and soon enough, depending on a diverse range of variables. It suffices to say that at some point in time, I will be standing over you, as genially as possible. Your soul will be in my arms. A color will be perched on my shoulder. I will carry you gently away.

Zusak anthropomorphizes Death by making him a speaking character with feelings and sense of humor. Death has a job to do—he must keep carrying people away when they die—but this doesn't mean he feels indifferent to the suffering of the people he carries away. Instead, Zusak makes Death a soulful witness to human tragedy.

Why Do Writers Use Anthropomorphism?

Here are a few of the main reasons why writers use anthropomorphism to bring their characters to life: 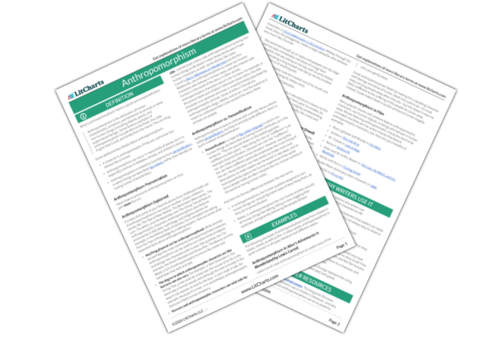