What is an extended metaphor? Here’s a quick and simple definition:

An extended metaphor is a metaphor that unfolds across multiple lines or even paragraphs of a text, making use of multiple interrelated metaphors within an overarching one. So while "life is a highway" is a simple metaphor, it becomes an extended metaphor when you say: "Life is a highway that takes us through green pastures, vast deserts, and rocky mountains. Sometimes your car breaks down or you run out of gas, and sometimes you get lost. Friends are the roadmaps that help you get where you're going." Now you've spread the idea of "life = highway" across multiple sentences and related ideas, and created an extended metaphor.

All metaphors can be broken down into two elements: a tenor and a vehicle.

For instance, in the metaphor "Life is a highway," life is the tenor because it's the thing being described, while "highway" is the vehicle because it's the thing life is being compared to. The metaphor operates by borrowing key attributes from the vehicle and attributing them to the tenor. The "Life is a highway" metaphor takes the attributes of a highway—including its association with journeys, adventures, speed, and the fact that we all travel them side-by-side—and connects them to life.

The Structure of Extended Metaphors

Extended metaphors have a main tenor and vehicle that make up the overarching or primary metaphor, but they also make use of other tenors and vehicles as the metaphor becomes more elaborate. Let's continue to use the example from above:

Life is a highway that takes us through green pastures, vast deserts, and rocky mountains. Sometimes your car breaks down or you run out of gas, and sometimes you get lost. Friends are the roadmaps that help you get where you're going.

Within the overarching metaphor of "life is a highway," several other metaphors make up the extended metaphor, and each one has its own tenor and vehicle: the various stages of life are like the varied landscapes of a large country; the challenges of life are like car troubles; friends are like road maps.

Conceit is a term that is similar to extended metaphor. In fact, conceit is often used as a synonym for metaphor—and to use it in that way is perfectly correct. However, conceit also has another, slightly more complicated definition. Here's a quick run-down of the two different ways the terms can be used:

Extended Metaphor in Frost's "The Road Not Taken"

Robert Frost's famous poem is an example of an extended metaphor in which the tenor (or the thing being spoken about) is never stated explicitly—but it's clear that the poet is using the road less traveled as a metaphor for leading an unconventional way of life. The entire poem, then, is an extended metaphor.

Two roads diverged in a yellow wood,
And sorry I could not travel both
And be one traveler, long I stood
And looked down one as far as I could
To where it bent in the undergrowth;

Then took the other, as just as fair,
And having perhaps the better claim,
Because it was grassy and wanted wear;
Though as for that the passing there
Had worn them really about the same,

And both that morning equally lay
In leaves no step had trodden black.
Oh, I kept the first for another day!
Yet knowing how way leads on to way,
I doubted if I should ever come back.

I shall be telling this with a sigh
Somewhere ages and ages hence:
Two roads diverged in a wood, and I—
I took the one less traveled by,
And that has made all the difference.

This passage, spoken by the character Jaques in Shakespeare's As You Like It, has become rather famous for its initial metaphor of "All the world's a stage." But not as many people know that the famous line is just the beginning of an extended metaphor, which contains several metaphors within it, using the language of scenes, actors, and parts. Over all, the lines develop an extended metaphor of remarkable breadth.

JAQUES: All the world’s a stage,
And all the men and women merely players.
They have their exits and their entrances,
And one man in his time plays many parts,
His acts being seven ages. At first, the infant,
Mewling and puking in the nurse's arms....

To analyze just one part of this extended metaphor, in the final sentence Jaques speaks of the "last scene of all," referencing death—when each of us "plays the part" of someone who has regressed to a childlike state, having lost everything: teeth, vision, taste, and, finally, life.

Extended Metaphor in Romeo and Juliet

Romeo delivers this monologue in Act 2, Scene 2 of Romeo and Juliet, after sneaking into Juliet's garden and catching a glimpse of her on her balcony. Romeo compares Juliet to a radiant sun, and then extends the metaphor by entreating her to "kill the envious moon."

But, soft! what light through yonder window breaks?
It is the east, and Juliet is the sun.
Arise, fair sun, and kill the envious moon,
Who is already sick and pale with grief,
That thou her maid art far more fair than she:
Be not her maid, since she is envious;
Her vestal livery is but sick and green
And none but fools do wear it; cast it off.

The moon is used here as a symbol of virginity, so when Romeo states that Juliet is the moon's maid, he means that she's still a virgin, and when he entreats her to "kill the moon" and "cast off" its vestal livery (a garment worn by virgins), he's suggesting that she should part with her virginity. The metaphor of the sun (Juliet) killing the moon (her virginity) works because the sun can be said to "kill the moon" each day—in the sense that its bright light drowns out the light of the moon in the sky, making it invisible.

In "Firework," Perry uses an extended metaphor to compare a firework to an inner "spark" of resilience which, in the context of the song, stands in opposition to the dreary experience of life and the difficulty of communicating with others. Here's an excerpt of the lyrics that captures the extended metaphor in action:

Do you know that there's still a chance for you?
'Cause there's a spark in you

Extended Metaphor in Martin Luther King's "I Have a Dream" Speech

The following quote from Martin Luther King's "I Have a Dream" speech is a clear example of extended metaphor, as MLK builds upon the initial metaphor of "cashing a check" in each successive sentence:

In a sense we’ve come to our nation’s capital to cash a check. When the architects of our republic wrote the magnificent words of the Constitution and the Declaration of Independence, they were signing a promissory note to which every American was to fall heir. This note was a promise that all men, yes, black men as well as white men, would be guaranteed the “unalienable Rights” of “Life, Liberty and the pursuit of Happiness.” It is obvious today that America has defaulted on this promissory note, insofar as her citizens of color are concerned. Instead of honoring this sacred obligation, America has given the Negro people a bad check, a check which has come back marked "insufficient funds." But we refuse to believe that the bank of justice is bankrupt. We refuse to believe that there are insufficient funds in the great vaults of opportunity of this nation. And so, we've come to cash this check, a check that will give us upon demand the riches of freedom and the security of justice.

Why Do Writers Use Extended Metaphors?

Writers use extended metaphors for many of the same reasons they use metaphors in general: 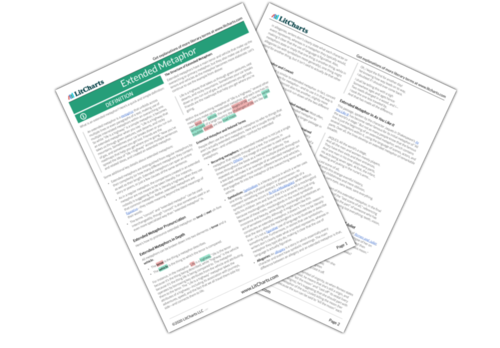