What is a dactyl? Here’s a quick and simple definition:

Some additional key details about dactyls:

Here's how to pronounce dactyl: dak-til

In order to understand dactyls in more depth, it’s helpful to have a strong grasp of a few other literary terms about poetry. We cover each of these in depth on their own respective pages, but below is a quick overview to help make understanding dactyls easier.

Accentual vs Quantitative Verse and Dactyls

The term dactyl takes on a different meaning depending on the type of verse in which it’s used: accentual verse or quantitative verse.

A Trick for Remembering What Dactyl Means

A secondary meaning of dactyl is “finger” or “toe,” and the word itself derives from the Greek and Latin terms for the three joints that make up the finger. Just as a finger is composed of a long joint that extends from the base of your hand followed by two smaller joints, dactyls in poetic meter consist of a “long” (stressed) syllable followed by two “short” (unstressed) syllables. So if you ever forget what dactyl means, let your fingers point you in the right direction. The clunky rhythm of dactylic meter is sometimes compared to that of a horse galloping. It’s not surprising then that perhaps the most famous example of a poem written in dactylic meter is about a battle charge by soldiers on horseback: Alfred Lord Tennyson’s “The Charge of the Light Brigade.” Here are examples from that poem and a few others that use dactylic meter. In each example, we’ve highlighted the stressed syllables in red and the unstressed syllables in green.

Dactyls in Tennyson’s “The Charge of the Light Brigade”

Notice, though, that the dactylic pattern is not followed strictly. Lines 3 and 7 consist of two dactyls but end with the “extra” one-syllable word “Death.” In addition, lines 4 and 8 end with the two-syllable word “hundred,” which lacks a third stressed syllable, making it not a dactyl but rather a trochee (a foot with two syllables, stressed-unstressed). Many poems written in a specific meter include deviations from the main metrical pattern for stylistic reasons—here Tennyson’s lines ending abruptly in “Death” evoke the sudden death that the soldiers faced.

The first two lines of Henry Wadsworth Longfellow’s epic poem Evangeline are among the most famous lines of poetry in dactylic meter.

This is the forest primeval. The murmuring pines and the hemlocks,
Bearded with moss, and in garments green, indistinct in the twilight...

Note that both lines end in trochees, not a dactyls (hem-lock; twi-light). This is another example of a poem that deviates from its main meter.

Walt Whitman is best known for writing free verse, but he often injected metered lines into his free verse sporadically. Here he uses a near-perfect line of dactylic hexameter seemingly out of the blue—the lines before and after this example are not dactylic at all.

Another classic example, though not as perfectly dactylic as the line above, is the title (and opening line) of Whitman’s poem “Out of the Cradle Endlessly Rocking.”

Why Do Writers Use Dactyls?

You won’t find many lighthearted poems written with dactyls, or really any popular lyric poems written with dactyls, and for good reason: the dactyl’s stressed-unstressed-unstressed (dum-da-da dum-da-da) pattern sounds inherently heavy and grandiose, and lends itself especially well to serious poems about war, conquest, and loss. In two of the most famous poems written in dactylic meter—Tennyson’s “The Charge of the Light Brigade” and Longfellow’s “Evangeline”—the poets match the weighty rhythm of the dactyl with their similarly grave subject matter: a fight to the death (Tennyson), and a search for a long-lost love (Longfellow).

Poets of ancient Greece and Rome also found in the dactyl a meter perfectly suited to their intense subject matter. Dactylic hexameter (six dactyls in a row per line) is by far the most common dactyl-based meter and is considered the defining metrical pattern of epic poems. Homer’s Iliad and Odyssey, and Virgil’s Aeneid, perhaps the three most famous epic poems ever written, all use dactylic hexameter. Poets like Homer and Virgil chose dactylic meter not just because of its inherent formality and gravity, but also because of how it sounded when recited. Though these days we think of epic poems as book-length written masterpieces, they were typically spoken aloud in group settings, often with some form of musical accompaniment that apparently worked well with dactylic meter. English translations of these epic poems are typically not written in dactylic hexameter, however, simply because it’s so difficult to do in English. 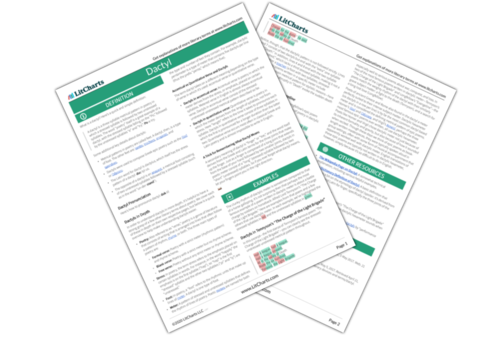