What is an analogy? Here’s a quick and simple definition:

An analogy is a comparison that aims to explain a thing or idea by likening it to something else. For example, a career coach might say, "Being the successful boss or CEO of a company is like being an orchestra conductor: just as the conductor needs to stand up front where everyone—even the musicians in the back row—can see him, a good CEO needs to make sure he or she is visible and available to all of the company's employees." The career coach is not saying that CEOs are exactly like orchestra conductors in every way. Rather, comparing CEOs to conductors through analogy allows the coach to articulate an important leadership quality in a memorable way.

Some additional key details about analogies:

Here's how to pronounce analogy: uh-nal-oh-jee

Developing a richer understanding of one thing by comparing it to another is the basic idea behind analogy. Far more than simply an illustrative or explanatory technique, analogies are fundamental to the way people think. The writer Douglas Hofstadter even went so far as to say that analogy is "the core of cognition," suggesting that the most fundamental tool we have for understanding the world is the ability to make comparisons between things.

What Makes an Analogy

For example, if you've ever seen the Disney movie Shrek, you may remember the phrase "ogres are like onions." In a memorable scene, the ogre (Shrek) tries to explain something about the true nature of ogres to his non-ogre friend by saying:

Shrek creates an analogy comparing the source (something familiar and known, in this case an onion) to the target (something mysterious and unknown, in this case ogres). His goal is to reveal something about ogres (the unfamiliar target) by showing that he's not so different from onions (the familiar source). Not all analogies are as cut-and-dry as this one, but Shrek's comparison is a good example of the basic structure of analogies. Keep in mind, it's perfectly acceptable to analyze analogies without talking about targets and sources—but these terms can be helpful in understanding the structure of analogies, especially with more complicated examples.

Analogy, metaphor and simile are all similar in that they all have to do with making comparisons. But there's some debate about the precise nature of the relationship between these three concepts. There are two main camps in this debate:

Camp 1: Metaphors and Similes are Types of Analogies

Members of this camp see analogies as a broader category into which metaphors and similes fit. They would say that metaphors are implicit analogies, while similes are explicit analogies. In other words, metaphors implicitly perform the function of analogy—pointing out similarities between two different things—by saying that something is something else. For example, "Juliet is the sun." People in the first camp would argue that the metaphor "Juliet is the sun" is a type of analogy because it operates by making an implicit comparison, such as "Juliet and the sun are similar; just like the sun, Juliet is radiant and fills Romeo's days with light." Meanwhile, first-campers would say that the simile "Juliet is like the sun" is also a type of analogy because it draws a comparison explicitly by saying that something is like something else in some respect: "Juliet is beautiful like the sun."

Camp 2: Metaphors and Similes are Tools for Making Analogies

However, this distinction can start to seem fuzzy when you start to ask where "describing" ends and "explaining" begins. When Romeo says that "Juliet is the sun," isn't he—in addition to describing her beauty—explaining to the reader his love for Juliet by comparing it to the sun?

Summing up the Camp 1 and Camp 2 Debate

It's not necessarily the case that one camp's view is better or more proper than the other, but the first camp's definition of the relationship between analogy, metaphor, and simile is more common—if only because it's not as rigid as the second camp's definition. That said, you only need to know that there are these competing definitions, and then be able to say why you think a given example is an analogy, simile, or metaphor based on the definition you think best fits each term.

Analogy in Shakespeare's Romeo and Juliet

In this example from Act 2 Scene 2 of Romeo and Juliet, Juliet Capulet puzzles over the main obstacle in her love for Romeo Montague: the Capulet and Montague families are rivals. She creates an analogy comparing Romeo to a rose, reasoning that just as the "sweetness" or loveliness of a rose is entirely independent of its name, the "perfection" she sees in Romeo is independent of—and not at all compromised by—his name and family:

’Tis but thy name that is my enemy.
Thou art thyself, though not a Montague.
What’s Montague? It is nor hand, nor foot,
Nor arm, nor face, nor any other part
Belonging to a man. O, be some other name!
What’s in a name? That which we call a rose
By any other word would smell as sweet.
So Romeo would, were he not Romeo call’d,
Retain that dear perfection which he owes
Without that title.

The melancholy character Jaques crafts the following analogy in Act 2 Scene 7 of As You Like It. In one of the most famous lines from all of Shakespeare, Jaques compares the world to stage, and each individual to an actor playing a part that changes with age.

All the world's a stage,
And all the men and women merely players;
They have their exits and their entrances,
And one man in his time plays many parts,
His acts being seven ages. At first, the infant,
Mewling and puking in the nurse's arms.
Then the whining schoolboy, with his satchel
And shining morning face, creeping like snail
Unwillingly to school. And then the lover,
Sighing like furnace, with a woeful ballad
Made to his mistress' eyebrow. Then a soldier,
Full of strange oaths and bearded like the pard,
Jealous in honor, sudden and quick in quarrel,
Seeking the bubble reputation
Even in the cannon's mouth...

Jaques concludes his speech by describing the remaining three "parts" or "seven ages": those of the Just Leader, The Silly Old Man who thinks he's still young, and the Truly Old Man who's as helpless as a baby. Using this analogy to compare "the world" to "a stage," and by extension "life" to "a play," allows Jaques to point out what he sees as a fundamental aspect of both real and theatrical experience: performance. These lines function as a particularly powerful analogy when read aloud in the theater, because they simultaneously demand that audience members confront the ways in which they're performing their own lives, remind them of their own mortality, and collapse the traditional boundary between actors on the stage and the audience watching them.

Analogy in Robert M. Pirsig's Zen and the Art of Motorcycle Maintenance

In Chapter 26 of Zen and the Art of Motorcycle Maintenance, the narrator attempts to describe his philosophical world view by drawing an analogy between knowledge and a train.

The narrator's concept of "Quality" refers to a holistic, balanced manner of existing in the world. The narrator believes that in modern life, we often fail to achieve Quality because we create an artificial distinction between an artistic, "Romantic" way of living life—being "in the moment," not stopping to analyze or reflect on things—and a scientific, "Classical" way of living life which involves analyzing how pragmatic things (like technology) work. Through the analogy of the Train, the narrator argues that both the Classical and Romantic modes of thought are necessary to living a balanced life in pursuit of Quality:

In my mind now is an image of a huge, long railroad train...In terms of the analogy, Classic Knowledge, the knowledge taught by the Church of Reason, is the engine and all the boxcars. All of them and everything that’s in them. If you subdivide the train into parts you will find no Romantic Knowledge anywhere. And unless you’re careful it’s easy to make the presumption that’s all the train there is. This isn’t because Romantic Knowledge is non-existent or even unimportant. It’s just that so far the definition of the train is static and purposeless...The real train of knowledge isn’t a static entity that can be stopped and subdivided. It’s always going somewhere. On a track called Quality...Romantic reality is the cutting edge of experience. It’s the leading edge of the train of knowledge that keeps the whole train on the track... The leading edge is where absolutely all the action is. The leading edge contains all the infinite possibilities of the future. It contains all the history of the past. Where else could they be contained?...At the leading edge there are no subjects. No objects, only the track of Quality ahead, and if you have no formal way of evaluating, no way of acknowledging this Quality, then the train has no way of knowing where to go.

Just as a train can't exist without its engine, its boxcars, or its lead locomotive, so too—the narrator argues—Quality cannot be pursued without applying both Classical and Romantic knowledge in a balanced way. This is a long and, obviously, complex example of analogy.

The White Tiger tells the story of Balram Halwai, a self-made entrepreneur who (somewhat illegally) works his way up from the bottom rungs of the social ladder in Indian society. In Chapter 5, Balram introduces the analogy of the Rooster Coop to explain how members of the Indian elite repress the poor:

The greatest thing to come out of this country in the ten thousand years of its history is the Rooster Coop. Go to Old Delhi, behind the Jama Masjid, and look at the way they keep chickens there in the market. Hundreds of pale hens and brightly coloured roosters, stuffed tightly into wire-mesh cages, packed as tightly as worms in a belly, pecking each other and shitting on each other, jostling just for breathing space; the whole cage giving off a horrible stench – the stench of terrified, feathered flesh. On the wooden desk above this coop sits a grinning young butcher, showing off the flesh and organs of a recently chopped-up chicken, still oleaginous with a coating of dark blood. The roosters in the coop smell the blood from above. They see the organs of their brothers lying around them. They know they’re next. Yet they do not rebel. They do not try to get out of the coop. The very same thing is done with human beings in this country.

Balram uses the concrete, ordinary image of a rooster coop to explain the invisible but cruel forces constraining India's poor from making social progress. Not only does he use the rooster coop as an analog for his country, but he also uses it to justify his own behavior throughout the novel.

Why Do Writers Use Analogies?

Writers, and people in general, use analogies for a wide variety of reasons:

The anthropologist Mark Nichter once said (using an analogy) that "a good analogy is like a plow which can prepare a population's field of associations for the planting of a new idea." In other words, analogies pull together information and knowledge we have already stored to create novel combinations, which become the foundation for new ideas. 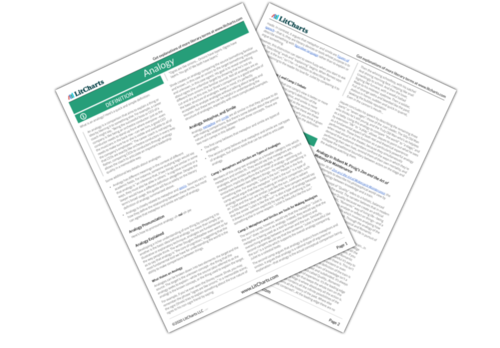