What is synecdoche? Here’s a quick and simple definition:

Synecdoche is a figure of speech in which, most often, a part of something is used to refer to its whole. For example, "The captain commands one hundred sails" is a synecdoche that uses "sails" to refer to ships—ships being the thing of which a sail is a part. A less common form of synecdoche occurs when a whole is used to refer to a part. An example of this is when the word "mortals" is used to mean humans—"mortals" technically includes all animals and plants (anything that dies), so using "mortals" to mean humans is a synecdoche that uses a category to stand in for one of its subsets.

Some additional key details about synecdoche:

How to Pronounce Synecdoche

Here's how to pronounce synecdoche: sih-nek-duh-kee

Synecdoche is related to (and commonly confused with) metonymy. While these two figures of speech are similar, they are not the same. Both metonymy and synecdoche do create a relationship in which one thing or idea stands in for another, but the specifics of these relationships are different:

Some people actually consider synecdoche to be a subset of metonymy, since to be a part of something is, by definition, to be closely related to that thing. Other people believe that the two terms are completely distinct—that metonymy can only occur when it proposes a relationship between two things that are not part of one another, and that synecdoche can never be simultaneously metonymy. There's no definitive consensus on which of these two ways of seeing metonymy and synecdoche is correct, so you should just know that the debate exists.

Fuzziness Between Synecdoche and Metonymy

In addition, in some cases it can be difficult to distinguish whether two things are related-but-separate or are a part of one another. For example, in the phrase "he asked for her hand in marriage," a woman's hand stands in for her whole person (her suitor wants to marry her, not just her hand, and her hand is a part of her body). Yet, because exchanging rings is a traditional part of marriage, it can be argued that the woman's hand is symbolically related to marriage. So is the phrase "he asked for her hand in marriage" a synecdoche, or is it both a synecdoche and a metonymy? To be honest, there's no definitive right answer. But if you know enough to be able to explain why someone might claim it's either synecdoche, or metonymy, or both, you almost certainly know enough about synecdoche.

Synecdoche appears often in everyday speech, often as a part of idioms that have become so well known that few people ever stop to think about the fact that these expressions don't mean what they literally say. Synecdoche also commonly appears in all sorts of literature, from prose to poetry.

Synecdoche is used in many common idioms, and it has become ingrained in the way we use language in our day-to-day lives. The meaning of some of the following examples may seem so obvious or literal that you may be surprised to discover that each one is, in fact, a synecdoche:

Synecdoche is frequently used in both poetry and prose.

Synecdoche in Beloved by Toni Morrison

Yonder they do not love your flesh. They despise it. They don't love your eyes; they'd just as soon pick em out. No more do they love the skin on your back.

In this context, "your flesh," "your eyes," and "the skin on your back," all stand in for "you." Baby Suggs is speaking of the hostility and violence that her community of freed slaves faces from white people. By describing her people as body parts rather than as whole people, Baby Suggs also emphasizes how the white people she describes dehumanize black people.

Synecdoche in Macbeth by William Shakespeare

In Act 4, Scene 3 of Shakespeare's Macbeth, an angry Macbeth kicks out a servant by saying:

Here, "thy face" stands in for "you." Macbeth is simply telling the servant to leave, but his use of synecdoche makes the tone of his command more harsh and insulting, showing the audience how angry he really is.

Synecdoche in "The Rime of the Ancient Mariner" by Samuel Coleridge

In "The Rime of the Ancient Mariner," Samuel Coleridge uses synecdoche in the lines:

Here, "wave" stands in for the whole ocean (or at least the part of the ocean—larger than a wave—that is relevant to the text). So when the Ancient Mariner says "the western wave," he is referring to the ocean to the west, extending to the western horizon.

In the second stanza of the poem, Emily Dickinson writes:

Here, "eyes" stand in for people. Dickinson's use of synecdoche emphasizes that the people in the room are watching the speaker, but it also serves a more technical purpose. In "I heard a Fly buzz—when I died" each stanza is four lines long. The first and third lines of each stanza are eight syllables long, and the second and fourth lines are six syllables long (a metrical pattern known as common meter). By using synecdoche, Dickinson is able to maintain the rhythm of the poem while communicating, in just a few words, that the people surrounding the speaker are watching her and have been weeping.

Why Do Writers Use Synecdoche?

Synecdoche is a versatile literary device, and writers use synecdoche for many reasons. Often synecdoches can elevate language, making a sentence or phrase sound more interesting or more poetic. Synecdoches can also help the writer create a strong voice for a character or for a narrator. In the example from Macbeth, for example, Shakespeare uses the synecdoche "Take thy face hence" rather than having Macbeth simply say "You can go now," because the former is far more revealing of Macbeth's haughty, violent character at this point in the play. Since synecdoche often appears in slang, idioms, and colloquialisms, writers also use synecdoche in dialogue to make characters sound more like real people.

The work of poets like Dickinson and Coleridge also shows how writers use synecdoche to exchange one word or phrase for another, making it a useful device for preserving rhythm and rhyme within poetic verse. Similarly, a writer could use synecdoche to enhance the sound of writing. For example, if you wanted to open a dog spa, the alliterative and synecdochic "Pampered Paws" would be a much better name than "Pampered Dogs."

Perhaps most important, synecdoche allows writers to pack a lot of meaning into just a word or two. In "I heard a fly buzz—when I died," Emily Dickson's decision to use "eyes" to represent people draws our attention to the things that their eyes are doing: weeping and watching. We can infer that these people feel powerless because, as the speaker dies, all they can do is weep and watch. The people themselves, feel, in a way, like they are nothing more than eyes. By using synecdoche, Dickinson doesn't need to tell us these details outright, which allows her to maintain the poem's sparse, fragmented style.

In any context, synecdoche is a way to layer multiple meanings onto a single word or phrase. Synecdoche helps writers make their work more complex, nuanced, and meaningful. 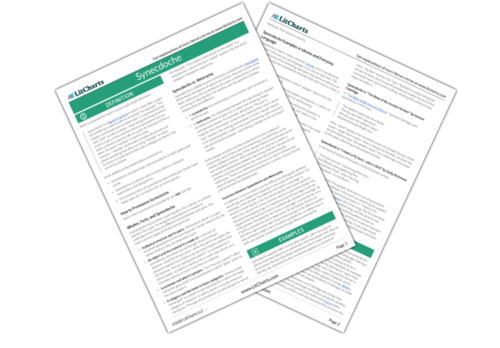