What is exposition? Here’s a quick and simple definition:

Exposition is the description or explanation of background information within a work of literature. Exposition can cover characters and their relationship to one another, the setting or time and place of events, as well as any relevant ideas, details, or historical context.

Some additional key details about exposition:

Here's how to pronounce exposition: ek-spuh-zih-shun

Classic fairy tales often use the words "once upon a time" to introduce expository details, like who the main characters are, where the story is set, and what the major conflict or problem of the story might be. Exposition isn't always quite that easy to spot, but some form of exposition appears in almost every work of literature, and readers typically rely on exposition and background information to give context to the main events of a story.

Exposition in Linear vs. Non-linear Narratives

In linear narratives (stories in which a writer describes events in the chronological order in which they occur), writers often include the bulk of the story's exposition near the beginning, then add additional expository details throughout the story—for example, each time a new character, setting, or key idea is introduced. In non-linear narratives (stories that include flashbacks or move backward and forward in time), writers are more likely to scatter expository details throughout the work. Writers can also build suspense by withholding expository details, and then revealing them later in a story.

Though writers can use many different techniques to create exposition, it comes in two main forms: direct and indirect exposition.

Prologues and epilogues are two tools writers can use to create exposition, providing readers with information that allows them to better understand the story or themes of a work of literature.

Writers who begin their story in media res (in the middle of the action) often use flashbacks and memories to convey important information about events that occurred before the beginning of the narrative. For example, in her dystopian novel The Handmaid's Tale, Margaret Atwood uses her narrator's memories to gradually explain how an ultra-conservative sect of Christianity overthrew the United States government and installed a repressive regime. The use of flashbacks in this case is an example of exposition in a nonlinear narrative.

Writers can also use characters' thoughts as an effective expository tool. Though this is similar to using a character's memories to fill in important information for the reader, a character's thoughts in the present moment can be used to indicate their opinions and worldview, relationships with other characters, and can even give readers important information about other characters. For example, if a writer wants to show that a character who is working as a cashier longs to be a musician, they might write something like, "Ellen gave the customer his change and sighed. If only I could find a practice space and a drummer, she thought. This could be the year we finally get the band back together."

In theater and film, characters' thoughts are often represented through monologue or dialogue. The words that characters speak—either in dialogue or monologue—are often used to communicate both direct and indirect exposition, and can convey important background information to the reader. Dialogue and monologue are especially important expository tools for playwrights and screenwriters, because most plays and films rely solely on a combination of visual storytelling, dialogue, and monologue to introduce the world of the story and its characters.

Non-fiction writers may quote media (such as books, newspapers, websites, text-messages, magazines, letters, or emails) in order to convey important information directly to readers. Similarly, fiction writers may use "in-universe media," meaning forms of media that exist within the world of a story, to contextualize key events or convey background information to the reader. For example, Mary Shelley's novel Frankenstein tells the story of Dr. Frankenstein and his monster through the letters of a peripheral character who is recounting the story to his sister.

Sometimes, narrators use in-universe media to convey new information to the reader and to a character simultaneously. In Harry Potter and the Sorcerer's Stone, for instance, Harry and the reader discover that he has been accepted into Hogwarts at the same time: when he finally gets to read the letter of admission. And throughout the Harry Potter series, various information is conveyed, to both Harry and the reader, through articles from the wizarding newspaper, The Daily Prophet.

All literature that involves a story includes some sort of exposition. If it didn't the characters would exist in a world without context, without histories or a setting.

Exposition in Romeo and Juliet by William Shakespeare

Shakespeare opens Romeo and Juliet with a prologue delivered by a chorus. It begins as follows:

Two households, both alike in dignity
In fair Verona, where we lay our scene
From ancient grudge break to new mutiny,
Where civil blood makes civil hands unclean.

With this prologue, Shakespeare uses direct exposition to convey important background information. He is telling the audience that the play is set in Verona and is about two feuding families who are of equal status and share equal blame for the feud and the deaths of civilians. The entire fourteen-line prologue, in fact, reveals even the fact that Romeo and Juliet will ultimately die: the entire plot, and the character's fate, is provided in the exposition of the prologue.

Speak tells the story of a young girl named Melinda's first year of high school, as she grapples with depression after something terrible happens to her at a party. As she celebrates Christmas with her parents, Melinda tells the reader about her struggle to hide her secret:

I almost tell them right then and there. Tears flood my eyes. They noticed I’ve been trying to draw. They noticed. I try to swallow the snowball in my throat. This isn’t going to be easy. I’m sure they suspect I was at the party. Maybe they even heard about me calling the cops.

Melinda does not tell her friends, family, or even the reader what exactly happened to her until later in the novel, so Anderson uses a combination of direct and indirect exposition—including flashbacks and Melinda's thoughts—to gradually clue readers into why she feels so isolated and depressed. In this passage, the reader learns that whatever happened at the party caused Melinda to call the police.

Exposition in Pride and Prejudice by Jane Austen

In Pride and Prejudice, Jane Austen's narrator uses dialogue to introduce Mrs. and Mr. Bennet, their relationship, and their differing attitudes towards arranging marriages for their daughters:

"A single man of large fortune; four or five thousand a year. What a fine thing for our girls!”

“My dear Mr. Bennet,” replied his wife, “how can you be so tiresome! You must know that I am thinking of his marrying one of them.”

“Is that his design in settling here?”

“Design! Nonsense, how can you talk so! But it is very likely that he may fall in love with one of them, and therefore you must visit him as soon as he comes.”

This conversation provides indirect exposition, showing readers—without explaining it directly—that Mrs. Bennet is preoccupied with arranging marriages for her daughters, and that Mr. Bennet has a deadpan sense of humor and enjoys teasing his wife.

Forster begins Howard's End with a series of letters from Helen to her sister, Meg. Helen is staying with family friends at a house called Howard's End when she writes the letter that closes Chapter 1, which reads as follows:

Howard's End, Sunday. Dearest, dearest Meg, I do not know what you will say: Paul and I are in love, the younger son who only came here Wednesday.

Though Helen and Paul quickly break off their relationship, Helen's declaration of love gives readers (and Helen's sister) key information they would not have known otherwise, and sets the action of the novel in motion. This is an example of the use of "in-universe media" to create exposition.

Songs often tell stories just as novels or other literature does. While not all songs tell stories that require exposition, those that do often contain exposition.

Exposition in We Are Never Getting Back Together by Taylor Swift

In the opening lines of "We Are Never Getting Back Together," Taylor Swift sings:

I remember when we broke up the first time
Saying, "This is it, I've had enough," 'cause like
We hadn't seen each other in a month
When you said you needed space. (What?)
Then you come around again and say,
"Baby, I miss you and I swear I'm gonna change, trust me."
Remember how that lasted for a day?

Swift draws from memories and uses dialogue to establish that she and the person she is addressing have broken up and gotten back together several times. This exposition provides context for the resolution she reaches in the chorus: to "never get back together."

Exposition in Hotline Bling by Drake

In the opening lines of "Hotline Bling," Drake sings:

These lines, which form part of the song's chorus, establish that Drake is addressing a person with whom he used to have a relationship. They also provide context for the events and feelings that he describes throughout the song's verses.

What's the Function of Exposition in Literature?

Exposition locates readers in the world of the story: it establishes the "who, what, where, when," and sometimes "why" of a plot. Depending on a writer's goals and the style in which they are writing, they may place exposition at the beginning of a story, or they may introduce it gradually throughout the text, often with the aim of creating mystery or building suspense by withholding key details that contextualize important events and explain characters' world-views or motivations. This can have the advantage of encouraging the audience to keep reading or watching as the story unfolds.

In journalistic writing, it is common practice to open a story with a "lede," or a sentence that sums up the main event that the story is reporting on. Then, each time a new place, person, or idea is introduced throughout the story, the writer will offer a brief explanation. Journalists use this kind of direct exposition because news reporting is intended to give readers important information in a clear, direct, and succinct fashion. 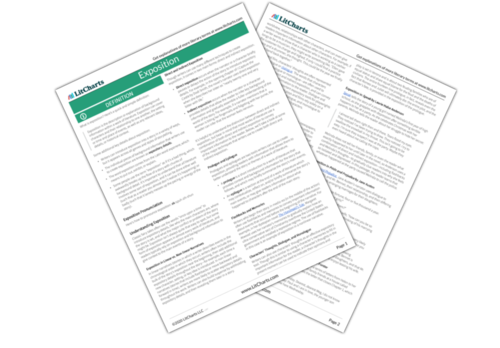