What is external conflict? Here’s a quick and simple definition:

An external conflict is a problem, antagonism, or struggle that takes place between a character and an outside force. External conflict drives the action of a plot forward.

A Closer Look at External Conflict

Conflict is an essential element of any plot: in most works of literature, one or more characters are struggling to solve a problem, defeat an enemy, win an achievement, or make some kind of change in the world. Conflict motivates characters to take action, and that's what keeps readers engaged. When the protagonist of a story is working to solve a problem or defeat an enemy, readers naturally want to know what will happen next: Does the character we're rooting for win or lose? If they find challenges on the way to their goal, will they overcome them? And how will they do it? Though many works of literature focus on a central conflict, a single story can include more than one conflict or problem, and in works of literature that feature multiple storylines with different protagonists, several sets of characters may be involved in separate ongoing conflicts.

It's important to remember that a single story can, and often does, include several types of conflict. For example, one character might have a conflict with another character and a broader conflict with society.

External conflict, of one sort or another, is essential to most of the stories people tell, no matter the genre.

At the character vs. character level, Romeo's relationship with Juliet puts him into conflict with Juliet's hot-headed cousin Tybalt. Eventually, Tybalt kills Romeo's friend Mercutio, and Romeo kills Tybalt in response. Similarly, Juliet's relationship with Romeo puts her into external conflict with her father, who expects her total obedience to his wishes and threatens to disown her when he doesn't get it.

But all of these character vs. character external conflicts also have aspects of character vs. society conflicts. Romeo's love for Juliet causes him to question the very nature of the feud between their families. His efforts to stop the fight between Mercutio and Tybalt ultimately bring about Mercutio's death. After Romeo avenges Mercutio's death by killing Tybalt, the Prince banishes Romeo from the city, having previously decreed that all violence must stop. Thus, Romeo finds himself in conflict with the broader society of Verona. For Juliet's part, her efforts to be with the man she loves put her in conflict with an entire society that treats women and their marriages as simply a means to political ends, and as a matter in which women themselves have no control.

External Conflict in "To Build A Fire" by Jack London

In the short story "To Build A Fire," Jack London writes about a man who foolishly attempts to travel alone through the Alaskan wilderness in the extreme cold. After he falls through some hidden ice and gets wet, he struggles to build a fire with his few matches to keep himself alive. After finally lighting a fire with his last match, the heat from his fire leads to disaster:

High up in the tree one bough capsized its load of snow. This fell on the boughs beneath, capsizing them. This process continued, spreading out and involving the whole tree. It grew like an avalanche, and it descended without warning upon the man and the fire, and the fire was blotted out! Where it had burned was a mantle of fresh and disordered snow.
The man was shocked. It was as though he had just heard his own sentence of death.

While the man eventually dies, his dog, who is at home in the natural world, survives. The man's struggle against the cold and the snow is an example of an external conflict between a character and nature.

External Conflict in 1984 by George Orwell

In George Orwell's novel 1984, the protagonist, Winston,  tries—and fails—to resist the oppressive power of the police state in which he lives. In one passage, the narrator describes the power of the Party (the unilateral political organization that controls Winston's society) as follows:

It was as though some huge force were pressing down upon you—something that penetrated inside your skull, battering against your brain, frightening you out of your beliefs, persuading you, almost, to deny the evidence of your senses. In the end the Party would announce that two and two made five, and you would have to believe it. It was inevitable that they should make that claim sooner or later: the logic of their position demanded it.

Winston does interact primarily with one member of the party — a man named O'Brien — and he could certainly be said to have a character vs. character conflict with O'Brien. However, O'Brien is very much just a representative of the broader party, and so Winston's struggle against the Party is primary, and the novel can be said to be an example of an external conflict between a character and society.

What's the Function of External Conflict in Literature?

Without a problem or conflict, most stories wouldn't go anywhere: the protagonist would stay at home, or perhaps they would achieve their goals without any of the challenges or struggles that make a good story interesting to read. Think about J.R. Tolkein's Lord of the Rings: if there was no conflict between the dark forces of Sauron and the other inhabitants of Middle-Earth, Frodo would not need to go on his journey to destroy the ring. Or Shakespeare's Hamlet: if Hamlet was not seeking revenge on his father's murderer, most of the story would not take place—Hamlet would have simply gone back  to university to continue his studies. The protagonist of a story may win or lose, but either way, the protagonist's struggle against another character, the natural world, or society drives the plot forward and ultimately makes the story worth telling. 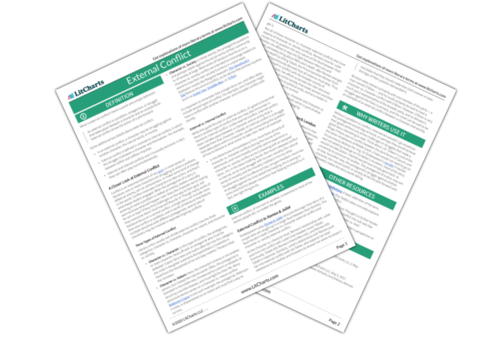