What is parallelism? Here’s a quick and simple definition:

Parallelism is a figure of speech in which two or more elements of a sentence (or series of sentences) have the same grammatical structure. These "parallel" elements can be used to intensify the rhythm of language, or to draw a comparison, emphasize, or elaborate on an idea. The following well-known adage is an example of parallelism: "Give a man a fish, and you feed him for a day. Teach a man to fish, and you feed him for a lifetime." The grammatical structures of the first and second sentences parallel each other.

Some additional key details about parallelism:

How to Pronounce Parallelism

Here's how to pronounce parallelism: par-uh-lel-iz-em

Parallelism in Grammar vs. in Rhetoric and Literature

The term "parallelism" is used to describe both a figure of speech and a principle in grammar, although its use in each context is slightly different.

In grammar, parallelism is the principle that using similar grammatical elements in certain contexts—when making a list, for example—leads to sentences that flow in a more natural way. In the following sets of sentences, the first version is parallel while the second is not. Note how the examples without parallelism are awkward and a little confusing.

In this first set of sentences, the first sentence contains a list of three parallel nouns, while the second combines two nouns with a verb.

In the second set of sentences, the first contains parallel adjectives, while the second combines two adjectives with a verb.

Parallelism in Rhetoric and Literature

In contrast to the strictly grammatical view of parallelism, in rhetoric and literature parallelism can do much more than just create a pleasing and grammatical sentence structure. Writers use parallel grammatical elements within one sentence or, more broadly, between and among different sentences in a paragraph, for effect: to emphasize ideas or themes, suggest connections, or highlight contrasts, all while adding rhythm to the structure of their expression.

Parallelism and Related Figures of Speech

One literary device that often makes use of parallelism is antithesis. In antitheses, two elements of a sentence are placed in contrast to one another. This opposition is clearest when a writer puts the ideas in parallel positions. Neil Armstrong used antithesis with parallelism when he first stepped onto the surface of the moon in 1969, using the parallel structure of the two halves of his sentence to highlight the contrast between his "small step" and the "giant leap" that this step represented in the history of humanity.

That's one small step for a man, one giant leap for mankind.

Another specific type of parallelism is anaphora. This figure of speech involves the repetition of at least one word at the beginning of successive clauses or phrases. In one of Winston Churchill's most famous speeches during World War II, he makes stirring use of anaphora:

Note that there are also other uses of parallelism in this excerpt of Churchill's speech that do not fall into the category of anaphora. The different locations that Churchill names ("on the beaches...on the landing grounds...in the fields and in the streets...in the hills") create parallelism through their grammatical similarity.

In asyndeton, a conjunction (such as "and") is omitted between parts of a sentence to create a certain rhythm. Often, this is made possible by parallelism, which helps the reader to interpret the sentence's meaning even when it is not (technically) grammatically correct. In Julius Caesar's famous boast to the Senate after his victory at the Battle of Zela, he makes use of asyndeton because he omits the word "and" before the final clause.

Technically this omission of "and" makes the sentence an example of "comma splicing," which is a grammatical no-no, but the parallelism allows the meaning to come through and creates a pleasing rhythm.

Parallelism in Psalms of the Old Testament

Parallelism is found throughout both the Old and New Testaments of the Christian Bible. In this pair of verses from Psalm 24, there are two examples of what biblical scholars call synonymous parallelism, meaning that the idea of the first clause is repeated and rephrased with a parallel grammatical structure in the second clause to emphasize or amplify the point.

The earth is the LORD's and everything in it,
the world, and all who live in it;
for he founded it upon the seas
and established it upon the waters.

In Shakespeare's Julius Caesar, Mark Antony is given the opportunity to speak at the funeral of his recently assassinated friend, Caesar. He uses this chance to incite a riot in the hopes of winning back control of the Senate from the conspirators who assassinated Caesar in the first place.

Friends, Romans, countrymen, lend me your ears;
I come to bury Caesar, not to praise him.
The evil that men do lives after them;
The good is oft interred with their bones...

The first use of parallelism in Antony's speech comes in the list of nouns with which he calls the crowd to attention, naming their reasons to be loyal listeners as friends and patriotic citizens. Antony then uses parallelism again (with antithesis) to state his intended purpose by contrasting the verbs "to bury" and "to praise." The third instance of parallelism is also an example of antithesis.

Parallelism in Ernest Hemingway's A Farewell to Arms

In this passage from A Farewell to Arms, Hemingway uses repetition and parallelism to create a rhythm that gives his simple style a precise and powerful effect. This repetition continues the matter-of-fact tone in which the narrator is describing the events of the war. This particular parallelism could also be called an example of epistrophe because its repetition occurs at the end of successive clauses.

In this famous poem, Longfellow chronicles the ride of Paul Revere on his way to warn colonists of the attacking British soldiers. The first two instances of parallelism are simple repetitions of grammatical elements—first the repetition of a verb phrase, and then a series of adjectives. The third instance is also an example of antithesis (as well as anaphora, with the repetition of "now"). This third parallelism also sets the scene with the striking imagery of the horse's hooves.

He has left the village and mounted the steep
And beneath him, tranquil and broad and deep,
Is the Mystic, meeting the ocean tides;
And under the alders, that skirt its edge,
Now soft on the sand, now loud on the ledge,
Is heard the tramp of his steed as he rides.

Parallelism in Jhumpa Lahiri's The Namesake

In this short excerpt from Jhumpa Lahiri's The Namesake, there are several examples of parallelism used to create rhythm within a sentence while elaborating on an idea. Here you can see how even without using the more elaborate versions of parallelism (anaphora, antithesis, asyndeton, etc.), the simple choice to use elements that are grammatically parallel within a sentence helps these sentences to flow effectively.

Without a single grandparent or parent or uncle or aunt at her side, the baby's birth, like most everything else in America, feels somehow haphazard, only half true. As she strokes and suckles and studies her son, she can't help but pity him. She has never known of a person entering the world so alone, so deprived.

Parallelism can add pleasing rhythm to speech that makes it seem more eloquent, can help to highlight or emphasize ideas, and through its use of repetition can make a speech more persuasive. No wonder politicians and other speech-makers use it all the time.

In his first speech to the American public as President, JFK explicitly sent a message to the nations of the world that the United States would undergo any difficulty to defend liberty around the world. In just this one sentence, he uses parallelism in a few places, two of which could also be classified as antitheses.

Let every nation know, whether it wishes us well or ill, that we shall pay any price, bear any burden, meet any hardship, support any friend, oppose any foe to assure the survival and the success of liberty.

In this speech, delivered just over a week after the attacks of September 11th, President Bush declared a "war on terror." There are three instances of parallelism in just these two sentences, with the first also being an example of anaphora, since it involves a repetition of words at the beginning of a phrase. The second and third uses of parallelism are lists whose parallel structures create rhythm and establishes a link between the many different responses to the terrorist attack.

We have seen the state of our Union in the endurance of rescuers, working past exhaustion. We've seen the unfurling of flags, the lighting of candles, the giving of blood, the saying of prayers—in English, Hebrew, and Arabic.

Parallelism is a common feature of many song traditions. Songwriters use parallelism to create rhythm and link ideas together.

Parallelism in "The House of the Rising Sun"

In this traditional folk song from the American South, made famous by The Animals, parallelism paints a picture of the singer's background, while contrasting his mother's honest profession (tailor) with his father's dishonest one (gamblin' man):

My mother was a tailor
She sewed my new blue jeans
My father was a gamblin' man
Down in New Orleans.

In this song, Van Morrison uses several forms of parallelism, including both anaphora and epistrophe—which, when used together, create symploce. This example makes the rhythmic potential of parallelism clear, and shows its usefulness in song-writing.

Why Do Writers Use Parallelism?

Parallelism is an important tool at any writer's disposal, and can be used for a variety of purposes:

Notice how even the bulleted list above is an example of parallelism. It's easy to read in part because the grammatical structure of each line is identical, beginning with an infinitive ("to" + verb). Parallelism is everywhere because it's one of the rules of grammar that makes ideas (both simple and complex) easier to understand. 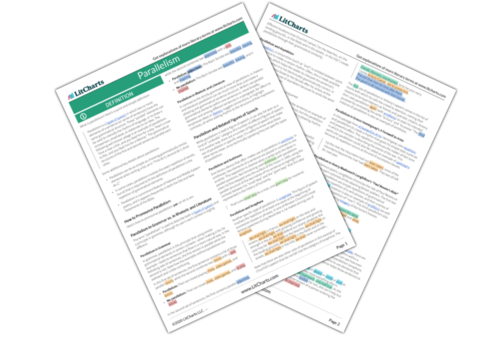