What is epizeuxis? Here’s a quick and simple definition:

Epizeuxis is a figure of speech in which a word or phrase is repeated in immediate succession, with no intervening words. In the play Hamlet, when Hamlet responds to a question about what he's reading by saying "Words, words, words," that's an example of epizeuxis.

Some additional key details about epizeuxis:

There is some confusion, particularly on the Internet, about the relationship between epizeuxis and another figure of speech called diacope. A number of websites state that the two are the same thing, but that's incorrect. The two figures of speech are similar, and both involve the repetition of words or phrases, but they are not the same:

Epizeuxis appears most often in literature or drama when a character is speaking during an extreme situation. It is also appears regularly in speeches when orators are trying to make a strong point that will rally an audience.

In Act 5, Scene 3 of Shakespeare's King Lear, the character of King Lear raves in grief at the death of his daughter Cordelia. Just before fainting with grief, he says:

Lear's full line of repeated "nevers" suggests that he cannot see the meaning in anything anymore. Further, the emphasis on this meaninglessness created by the use of epizeuxis communicates the profound depths of Lear's despair.

Epizeuxis Example in Heart of Darkness

In Joseph Conrad's Heart of Darkness, the narrator Marlow goes up the Congo in search of a mysterious ivory trader named Kurtz, who seems to Marlow like he may be more enlightened than the other greedy Europeans Marlow has encountered in the Belgian Congo (a part of Africa taken as a colony by Belgium in the 19th century). When Marlow finally finds Kurtz, though, it turns out that Kurtz has actually gone murderously insane, that his "englightened" views were in fact hollow. Still, Marlow is entranced by the magnetism and power of Kurtz, and still hopes to find in Kurtz some answer to the despair that Marlow feels about the darkness in men's hearts. So when Kurtz is dying, Marlow wants to hear Kurtz's last words. Those words are:

"The horror, the horror."

"The horror" stated just once might suggest that Kurtz is thinking of something personal to him. But the emphasis and terrible weariness emphasized by this use of epizeuxis communicates something deeper, that Kurtz is saying something universal: that there is no answer for Marlow, only despair, only horror.

In the essay "Where I Lived, and What I Lived For" in his book Walden, Henry David Thoreau writes the following passage:

Here the epizeuxis of the repeated "simplicity" highlights and hammers home just how important Thoreau believes simplicity to be as a human value. In the lines after his use of epizeuxis, Thoreau elaborates on what he means by "simplicity." But it is the repetition of simplicity that acts like a kind of drum or siren, making the reader stop and pay attention.

In October of 1941, as England was fighting for its life against Germany during World War II, the English Prime Minister, Winston Churchill, delivered a speech meant to galvanize the English people so that they wouldn't give up in the face of German power. The following lines were part of the speech:

Notice how the epizeuxis of "never, never, never, never" not only communicates a determination not to yield, but that the repetition itself is like an embodiment of that relentless determination. Also note that the repetition of "never give in" at the beginning of the first and second clauses of the first sentence is an example of another kind of figure of speech called anaphora. As this demonstrates, epizeuxis can, of course, be used in conjunction with other figures of speech.

In a 2001 speech in which he hoped to make the case for getting another term as prime minister of England, Tony Blair used epizeuxis to make very clear that his priority for his next term would be education:

If we are given a second term to serve this country, our mission will be the renewal of our public services. There is nothing more important to making Britain a fairer and stronger country.

Why Do Writers Use Epizeuxis?

Epizeuxis is not a subtle figure of speech. It's immediate repetition of the same word is more like a battering ram. Because of that, epizeuxis provides powerful, relentless emphasis. Writers can use this emphasis in different ways, though:

While epizeuxis is blunt and powerful, that blunt power is actually a reason that it should be used sparingly. Used too often, and it will make writing seem hysterical and over the top, and its power will be wasted. 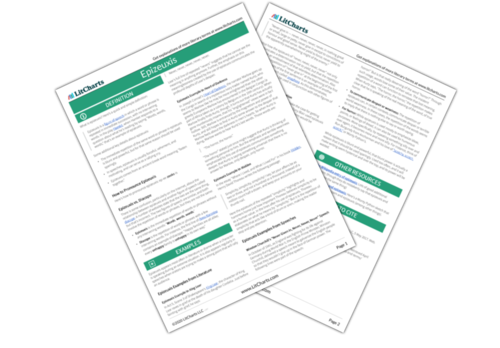