What is consonance? Here's a quick and simple definition:

Consonance is a figure of speech in which the same consonant sound repeats within a group of words. An example of consonance is: "Traffic figures, on July Fourth, to be tough."

Some additional key details about consonance:

Here's how to pronounce consonance: kahn-suh-nince

Alliteration, like consonance, is a figure of speech that involves the repetition of sounds. Consonance and alliteration differ, however, in two key respects.

In practical terms, these rules mean that consonance can sometimes be a form of alliteration, but isn't always.

Consonance That Is Also Alliteration

Consonance That Is NOT Also Alliteration

In the example below, consonance is not also alliteration, because the repeating consonant sounds almost never occur on either the first or stressed syllables (which is required for alliteration).

Consonance also plays a role in rhyme. Rhyme is the repetition of identical sounds, usually (but not always) located at the ends of words. Rhymes can be either repeated consonant sounds or vowel sounds (or combinations of the two). A rhyme, then, can be consonant, but not all rhymes are consonant. Here's an example of two different instances of consonance functioning as rhyme:

There once was a teacher named Bill
Who placed his teapot on the sill:
The students took aim
With their pens, without shame,
Crying, "Bill! It's your pot you must fill!"

Lines one, two, and five end with an "L" sound, and lines three and four with an "M" sound. Both of these sound-clusters are rhymes as well as examples of consonance.

Consonance is common in all sorts of writing, including poetry and prose literature, as well as song lyrics.

In both poetry and prose, consonance can give language a musical element, as well as emphasize sounds or words that resonate with the main ideas or themes of the work. When consonance is also alliterative, it can add rhythm to the text, too.

This famous poem by Walt Whitman is an enormous catalogue of what he sees and hears and feels. The consonant repetition of the "s" sound heightens the sonic and specifically musical quality of the poem, so that the poem mimics the very activity it describes: singing.

I celebrate myself, and sing myself, / And what I assume you shall assume ...

Note that, because the "s" sounds occur either at the beginnings of words or in their stressed syllables below, this is also an example of alliteration.

Spoken by Hamlet, the Prince of Denmark, these lines use consonance to make the language more incisive. The dark joke Hamlet is making is that his mother has committed incest by marrying his father's brother.

A little more than kin, and less than kind.

The use of consonance below gives the lines a greater sense of cohesion and gravity, demonstrating just how dire are the circumstances being described. The speaker really believes that his heartache is like a physical wound.

Not at the first sight, nor with a dribbed shot,
Love gave the wound, which, while I breathe, will bleed ...

In this line from chapter 9 of Moby-Dick, the "s" and "h" sounds mirror the activity of the scene—singing—by making the prose musical.

Nearly all joined in singing this hymn, which swelled high about the howling of the storm ...

Psalm 23 of the King James Version of the Bible

The repetition of the awkward "th" sound in this passage means that the prose moves at a slower pace—just try reading it out loud and you'll see that the difficulty in pronouncing the consonant sounds physically slows you. This mirrors the slowness and care with which one might walk through the "valley of the shadow of death."

Yea, though I walk through the valley of the shadow of death, I will fear no evil: for thou art with me; thy rod and thy staff, they comfort me.

In these lines from book 1 of Paradise Lost, Milton's complex use of consonance demonstrates his masterful command of the English language.

Of Man's first disobedience, and the fruit
Of that Forbidden Tree, whose mortal tast
Brought Death into the World, and all our woe,
With loss of Eden, till one greater Man
Restore us, and regain the blissful Seat ...

Since consonance is a sound-based device that can make language sound musical, it should be no surprise that songwriters use it all the time in their music.

Woody Guthrie, "The Biggest Thing That Man Had Ever Done"

The American folk musician Woody Guthrie uses consonance on the "d," "m," and "b" sounds to create a bouncing, humorous, re-imagination of major events in world history.

I beat the daring Roman, I beat the daring Turk,
Defeated Nero's army with thirty minutes' work,
I fought the greatest leaders and I licked them everyone,
And that was about the biggest thing that man had ever done ...

Dylan's song is a bounding, leaping, joyful composition of sounds and ideas, and the consonance of "f" and "p" and "t" and "b" sounds below shows his playfulness as he paints a scene of what might otherwise seem like desperation and displacement.

Here, the repetition of "s" sounds establishes Jay-Z's command of his art form. Note that the "s" sound in cops is softer than the almost "z" sound in "is" and "Feds," and that these two sounds are related to each other but not identical.

Peep the style and the way the cops sweat us
The number one question is, Can the Feds get us?

Why Do Writers Use Consonance?

Consonance is used as an intensifier of language. This intensifying occurs in several ways. 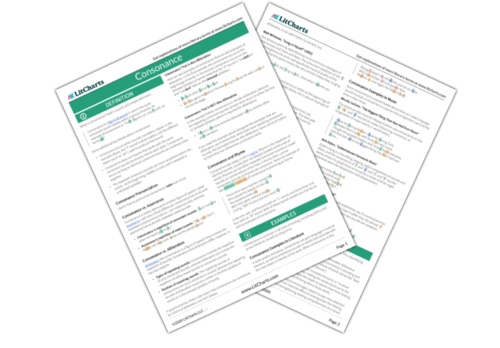