What is a trochee? Here’s a quick and simple definition:

Some additional key details about trochees:

How to Pronounce Trochee

Here's how to pronounce trochee: tro-key

In order to understand trochees in more depth, it’s helpful to have a strong grasp of a few other literary terms about poetry. We cover each of these in depth on their own respective pages, but below is a quick overview to help make understanding trochees easier.

Accentual vs Quantitative Verse and Trochees

The term trochee takes on a different meaning depending on the type of verse in which it’s used: accentual verse or quantitative verse.

The metrical pattern of a trochee is said to have a "falling rhythm" because the emphasis comes at the beginning of the foot: "da-dum da-dum." This falling rhythm is the exact opposite of the iambic "rising rhythm" that is more common in both poetry and speech, so the cadence of trochaic meter tends to sound a little unnatural to the ear. While for this reason trochees are relatively rare in most poetry, the "downward" motion and "backward" orientation of trochees actually makes them a popular foot for writing about dark subjects like madness and death. In the examples of trochaic verse below we’ve highlighted the stressed syllables in red and the unstressed syllables in green.

Trochees in Poe's "The Raven"

Edgar Allen Poe's work deals frequently with the subjects of madness and death, so it's fitting that Poe often uses the trochee. One of the most well-known trochaic poems ever written is Poe's "The Raven," which is about a grieving young man's encounter with a talking raven and his slow descent into madness.

On the pallid bust of Pallas just above my chamber door;

And his eyes have all the seeming of a demon’s that is dreaming,

And the lamp-light o’er him streaming throws his shadow on the floor;

Notice how lines 2, 4, 5 and 6 all end on stressed syllables, breaking the stressed-unstressed pattern of trochaic meter. This is called catalexis—when the final syllable of a line is dropped to create a pause or a rhyme. Trochaic poems are often full of catalectic lines simply because it is difficult to rhyme on an unstressed syllable.

Though Shakespeare typically writes in iambic pentameter, he used trochaic meter to give an eerie and ominous feeling to the the spells he wrote for the witches in Macbeth.

The backward stress pattern of trochees is effective not only for making the words of witches sound even more unearthly, but for giving them the kind of incantatory rhythm that is used in so many magic words, like Hocus pocus and Open Sesame.

Trochees in Auden's "In Memory of W.B. Yeats"

W.H. Auden's short elegy for the poet W.B. Yeats uses the plaintive tone created by the downward emphasis of the trochee as he expresses sadness over a friend's death. Here's an excerpt of four lines from the poem:

Earth, receive an honoured guest;
William Yeats is laid to rest:
Let this Irish vessel lie
Emptied of its poetry.

Notice again how the unstressed syllable is dropped from the end of each line to enable rhyming. Generally speaking, it is much more common to end lines, as well as poems, on stressed syllables because it creates a pause that gives a sense of completion.

Edna St. Vincent Millay wrote the poem "Sorrow" in trochaic meter, emphasizing the marked downward beat of the poet’s mood. She invokes the image of rain in the first line, drawing a parallel to the falling rhythm of the trochee. This is the first six lines of the poem:

Sorrow like a ceaseless rain
Beats upon my heart.
People twist and scream in pain, —
Dawn will find them still again;
This has neither wax nor wane,
Neither stop nor start.

Note how the final unstressed syllable at the end of each line is omitted, resulting in what's called a "broken" foot. This technique is called catalexis and is used, in this case, to make the poem's rhyme scheme possible. The final foot of each line is counted as a foot despite its "silent" final syllable. Therefore, it would still be said that the poem is written in trochaic tetrameter (four trochees making up eight syllables per line) alternating with trochaic trimeter (three trochees making up six syllables per line), even though the poem alternates between lines of five and seven syllables.

In his popular children's book "Green Eggs and Ham," Dr. Seuss writes one character's speech in trochees, while the other he writes in iambs. The stress pattern of trochees is the opposite of iambs, so the difference can be thought of as a metrical reflection of the two character's clashing personalities and perspectives. The optimistic "iambic" character keeps offering the pessimistic "trochaic" character to try something new (a nice dish of green eggs and ham), while the "trochaic" character keeps refusing.

More generally, the unusual, inverted rhythm of the trochee serves to accentuate the stress pattern of words, making them easier to remember. This makes trochees good for children's books, such as "One Fish Two Fish Red Fish Blue Fish" and nursery rhymes like "Baa Baa Black Sheep" and "Mary Had a Little Lamb," all of which use trochaic meter.

In this passage from Shakespeare's King Lear, King Lear's daughter has just been killed before his very eyes. Although the play is written, like most of Shakespeare's plays, in iambic pentameter, Shakespeare substitutes trochees for all five iambs in the final line to demarcate a heightening of emotion and to create the tone of a wail.

Why Do Writers Use Trochees?

The word "trochee" comes from the Greek word for "wheel"—a word that, in the original Greek, is also associated with the action of running. This helps to explain the rolling or cascading effect that trochaic meter can bring to verse, as though the end of each foot, without an emphasized syllable to create a pause, is running directly into the beginning of the next foot. The result is that trochaic meter has a strong forward momentum that can often make the meter feel incessant.

At the same time, a trochee's "falling rhythm" also makes it feel plaintive, restive, or mournful, like a wail. These qualities together make trochaic meter particularly well-suited to texts with grim subjects. However, it should be noted that poems written in strict trochaic meter are fairly uncommon in English verse because the trochee's unusual stress pattern makes it a challenge to write with. Instead, trochees appear most frequently in poems whose primary meter is not trochaic. In these cases, trochees are used as an irregular foot—deliberately out of place amid a more natural sounding meter—in order to add emphasis or create a variation in the established rhythm. 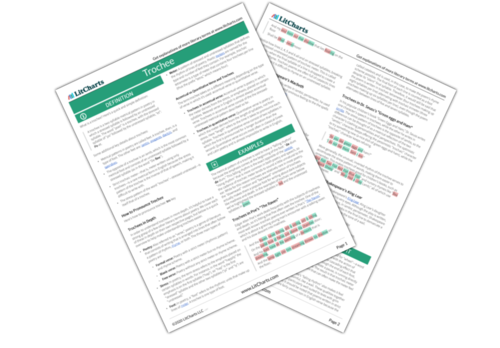