What is euphony? Here’s a quick and simple definition:

Euphony is the combining of words that sound pleasant together or are easy to pronounce, usually because they contain lots of consonants with soft or muffled sounds (like L, M, N, and R) instead of consonants with harsh, percussive sounds (like T, P, and K). Other factors, like rhyme and rhythm, can also be used to create euphony. An example of euphony is the end of Shakespeare's famous "Sonnet 18," which goes "So long as men can breathe, or eyes can see, / So long lives this, and this gives life to thee."

Some additional key details about euphony:

How to Pronounce Euphony

Here's how to pronounce euphony: Yoo-fuh-nee

Euphony has to do with the way words sound, and it's easy to identify if you trust your own ear, and ask yourself: do the words sound pleasing together? On the other hand, "pleasing" is a subjective criterion: some combinations of words might sound pleasing to one person's ear, and not particularly pleasing to another's. So it's useful, when you're trying to identify euphony, to know what types of letters are used most often to make euphonic sounds. Generally speaking, those letters include:

So a word, phrase, sentence, paragraph, or poem is typically considered euphonic when it contains a lot of these consonants in relatively close succession. However, these consonants don't have to appear right next to each other, and euphonic phrases often contain some harsher or more percussive consonants (like T, P, and K) as well. These consonants are referred to as "explosive consonants," and while they can't be avoided entirely, too many of them can make a sentence begin to sound cacophonous—the opposite of euphonic.

Other Elements Used to Create Euphony

In addition to knowing what letters to look for in words, it's important to have a sense of the other tools that writers use to make their words euphonic. Those include:

So long as men can breathe, or eyes can see,
So long lives this, and this gives life to thee.

But There Isn't a Formula

Despite everything we've just said, you can't be too technical about euphony. Some words, phrases, and sentences are beautiful to the ear, it seems, just because they are—and not because they use particular consonants or figures of speech. A good example of this is "cellar door," two words which, together, are often said to be the most euphonic words in the English language. The writer J.R.R. Tolkein once wrote:

But why is "cellar door" pleasing to the ear? It doesn't rhyme or use assonance. It could be attributed to the use of soft consonants like L and R, or the sibilant C. Or perhaps it's just a good reminder that you can't always explain exactly why something sounds beautiful—and that's fine, too. At the end of the day, whether or not something is euphonic comes down to the listener's interpretation. As if to illustrate that very point, in 1926 George Benjamin Woods and ‎Clarence Stratton wrote "A Manual of English," in which they advise writers:

Give heed to the sound of the sentence. Euphony demands the use of words that are agreeable to the ear. Avoid, therefore, whatever would give offense, such as harsh sounds, similar word endings or beginnings, riming words, alliteration, and careless repetition.

In other words, they recommended against using the very tools that are now generally accepted as helping to create euphony. It just goes to show that, with euphony, it's often a matter of the listener's preference.

The following examples of euphony have been gathered from poetry and plays, ranging from the time of the Greeks to today.

Euphony in The Iliad

In these lines from Book XII of Lattimore's translation of Homer's Iliad, euphony helps reinforce the lulling effect of the winds dying down. Pay particular attention to the use of assonance and consonance to make the words euphonic.

Euphony in Dorothea Grossman's "I have to tell you"

This very short poem by Dorothea Grossman, titled "I have to tell you," uses a combination of factors to achieve euphony, including assonance, consonance, and lots of euphonic letters in general (e.g., lots of R's, S's).

I have to tell you,
there are times when
the sun strikes me
like a gong,
and I remember everything,
even your ears.

Euphony in Romeo and Juliet

This example from lines 5-6 of the Prologue of Shakespeare's Romeo and Juliet creates euphony with two sets of alliteration, one with “F” sounds and one with “L” sounds (both of which are consonants often used to create euphony).

Why Do Writers Use Euphony?

Writers use euphony to make their language sound beautiful. It's a particularly useful device to use when writing about a subject that is supposed to be beautiful, since it makes the language itself mimic its subject. As Edward P.J. Corbett and Robert J. Connors wrote in Classical Rhetoric for the Modern Student, "the euphony and rhythm of sentences undoubtedly play a part in the communicative and persuasive process—especially in producing emotional effects" in the reader. If a writer is describing something they want to make seem attractive, pleasant, or beautiful, one of the best ways of achieving this is to make the language itself sound harmonious. 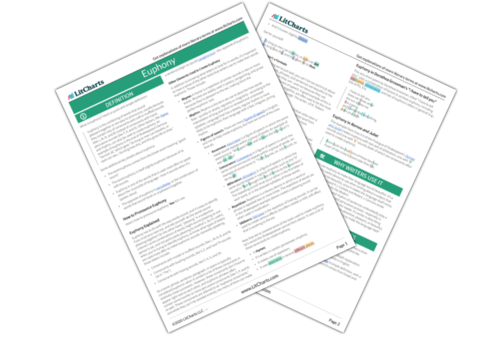