What is juxtaposition? Here’s a quick and simple definition:

Juxtaposition occurs when an author places two things side by side as a way of highlighting their differences. Ideas, images, characters, and actions are all things that can be juxtaposed with one another. For example, it's a common plot device in fairy tales such as Cinderella to juxtapose the good-natured main character with a cruel step-sibling. The differences between the characters, as well as their close relation to one another, serve to highlight the main character's good qualities.

Some additional key details about juxtaposition:

Here's how to pronounce juxtaposition: juck-stuh-puh-zish-uhn

Because juxtaposition is such a broad concept, covering the contrast created between all sorts of different things when placed in close proximity, there are a number of terms that overlap with it or fall under its broader umbrella. Three of the most common of these terms are foil, antithesis, and oxymoron.

A foil is one specific form of juxtaposition having to do with contrasts between characters. When a writer creates two characters that possess opposite characteristics, it's often with the intention of highlighting some specific about one or both of the characters by juxtaposing their qualities. Such characters are foils of one another. The tortoise and the hare, from the famous folk tale, are examples of foils.

"Juxtaposition" describes the writer's action of placing these two characters next to one another for the purposes of comparing them, while foil is a word that describes the characters themselves (the hare is a foil to the tortoise, and vice-versa).

An example of antithesis is Neal Armstrong's first words when he reached on the surface of the moon:

"That's one small step for a man, one giant leap for mankind."

This is a clear pairing of opposites, expressed in a parallel grammatical structure. In contrast, now imagine a description of Neal Armstrong's figure foregrounded against the night sky:

The tiny figure of Armstrong in his pristine white suit stood out against the expansive darkness of the universe beyond him.

This description involves juxtaposition rather than antithesis, for two reasons: it does not contain parallel grammatical structure, and the comparison goes beyond opposition. The white of the suit contrasts with the darkness of space in a clear contrast of opposites, but the sentence also contains a comparison between Armstrong's small size and the overwhelming magnitude of the universe, between the human and the non-human, even between the temporary and the eternal. These effects, which amount to a feeling of awe and loneliness, come from the choice to place Armstrong and the universe next to one another—it comes from their juxtaposition.

An oxymoron is a figure of speech in which two contradictory terms or ideas are paired together in order to reveal a deeper truth. Put another way, an oxymoron uses the juxtaposition of its two words to imply something deeper than either word individually could convey.

For instance, it's an oxymoron when, in Romeo and Juliet, Juliet says that "parting is such sweet sorrow." The juxtaposition of these two words, "sweet sorrow," captures the complexity of love and passion, that it is capable of inspiring both pain and joy at the same time.

Juxtaposition is a basic tool of storytelling, as writers choose how to place their characters, settings, arguments, and images in relation to one another to achieve their aims. In this section you'll find examples of juxtaposition from fiction, poetry, non-fiction, and drama.

In Frankenstein, Mary Shelley creates a few jarring juxtapositions that serve to accentuate the monstrosity as well as the humanity of the Creature that Victor Frankenstein brings to life. The Creature learns to speak in part by reading Milton's Paradise Lost, and so his language is ornate and elevated, full of thee's, thy's, and thou's. The juxtaposition of this elegant, formal speech with the Creature's ugly, deformed features and terrible strength creates an uncanny, terrifying effect that, at the same time, increases the reader's understanding of the Creature's tragedy, since we see his clear intelligence.

Over the course of the novel, Shelley also juxtaposes the actions of the Creature, who eventually responds to the world's scorn with a violent urge for revenge, with those of Victor Frankenstein, whose arrogant recklessness created the Creature in the first place and whose lack of mercy or empathy condemned the Creature to lonely isolation. This juxtaposition begs the question: who is the real monster?

One of T.S. Eliot's most well-known poems, "The Waste Land," is a patchwork of different allusions and striking imagery, as Eliot uses juxtaposition to knit together a dizzying range of sources and ideas. Eliot juxtaposes April, a springtime month, with winter, and uses irony to reverse the reader's expectation for this comparison (calling April cruel and winter warm). There is also a second juxtaposition in the image of blooming lilacs in the "dead land," two contrasting images that bring out one another's features.

In Rachel Carson's Silent Spring, one of the foundational works of the modern environmental movement, juxtaposition plays an important role in Carson's framing of her argument. The first chapter of the book, "A Fable for Tomorrow" presents a beautiful small town "in the heart of America," at first stressing its natural abundance:

Along the roads, laurels, viburnum and alder, great ferns and wildflowers delighted the traveler's eye through much of the year

Soon, though, a blight descends, and spring, which normally brings with it new life, is instead filled with eerie silence:

The roadsides, once so attractive, were now lined with browned and withered vegetation as though swept by fire.

The juxtaposition of the natural, wholesome beauty of the present with the devastation of environmental collapse is meant as a warning for Carson's readers. The title itself, Silent Spring, is a condensed version of this juxtaposition, since it's meant to signify the vanishing of songbirds.

In Shakespeare's history play Henry IV Part 1, a monologue of Prince Henry's reveals that Henry himself is thinking in terms of juxtaposition. In the speech, he outlines how his current reputation as a reckless youth will make his eventual "reformation" into a responsible king look even better: he imagines his changed behavior as shining "like bright metal on a sullen ground."

... nothing pleaseth but rare accidents.
So, when this loose behavior I throw off
And pay the debt I never promised,
By how much better than my word I am,
By so much shall I falsify men's hopes;
And like bright metal on a sullen ground,
My reformation, glittering o'er my fault,
Shall show more goodly and attract more eyes
Than that which hath no foil to set it off.

In film, juxtaposition can come not just from contrasts and comparisons created between characters and dialogue, but also from editing together different images, so that the cut from one image to another tells a story.

In Stephen Spielberg's iconic thriller, Jaws, the director uses juxtaposition to heighten the film's suspense as the massive great white shark stalks its unsuspecting prey. In quick succession, Spielberg cuts from lighthearted beach scenes (children playing on the beach, surfers paddling out to sea, and lifeguards relaxing) to underwater shots with suspenseful music, hinting at the presence of the shark. The viewer is unsure who will be the shark's target, but this juxtaposition between the cheerful world above the water and the frightening creature underneath it creates a sense of fear and anticipation of what's to come.

When a photographer composes an image, selecting what elements to include in their pictures, he or she might consider how different elements in the image will relate to one another when they are juxtaposed. This relation is part of what allows a photographer to tell a story with just a single image.

Juxtaposition in Marc Riboud's "The Flower and the Bayonet" (1967)

In this famous photograph from the era of the Vietnam War, French photographer Marc Riboud captured an image whose power comes from a striking juxtaposition. A young protester, Jan Rose Kasmir, who was 17 at the time, holds a single flower up to the line of bayonet-bearing soldiers who are attempting to control the anti-war demonstration. The juxtaposition of this fragile symbol of peace and innocence with the heavily armored soldiers (who represented the war effort) became an important image in the Vietnam protest movement.

Many songwriters also make use of juxtaposition as they present images in their songs and, as in the case below, the technique can also be used to suggest conflict.

This catchy classic by Billy Joel deals with the timeless theme of romance across class lines. In this case, Joel is the "downtown man" who is pursuing an "uptown girl," and the juxtaposition of their two worlds (the "backstreets" and the "white bread world") helps encapsulate their different backgrounds.

Why Do Writers Use Juxtaposition?

Juxtaposition is an important technique for any writer, and can serve a variety of purposes: 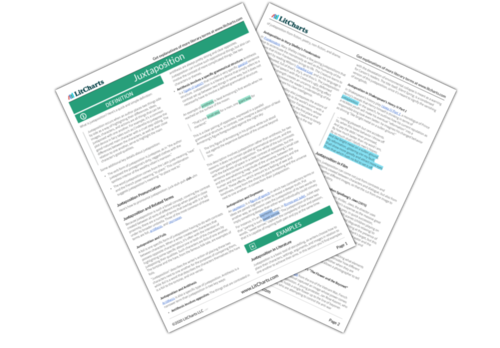