What is parataxis? Here’s a quick and simple definition:

Parataxis is a figure of speech in which words, phrases, clauses, or sentences are set next to each other so that each element is equally important. Parataxis usually involves simple sentences or phrases whose relationships to one another—relationships of logic, space, time, or cause-and-effect—are left to the reader to interpret. Julius Caesar's declaration, "I came, I saw, I conquered," is an example of parataxis.

Some additional key details about parataxis:

How to Pronounce Parataxis

Here's how to pronounce parataxis: par-uh-tak-sis

Parataxis With and Without Conjunctions

Parataxis is often described (particularly on the Internet) as only occurring when conjunctions are omitted, but that is incorrect. Parataxis can occur either with or without conjunctions.

Also called asyndetic parataxis, this form of parataxis involves asyndeton, which is the omission of conjunctions. Here's an example from Ernest Hemingway's The Sun Also Rises:

"The steer was down now, his neck stretched out, his head twisted, he lay the way he had fallen."

Each clause of this sentence can stand alone, and each one is therefore equal to the others, with no hierarchy among them. The text reads as choppy and abrupt, and the images come at the reader in a rush, compressing the experience and image into something immediate that must be processed all at once, much the way being at an actual bullfight would seem for a person in the stands.

Asyndetic parataxis can also occur across multiple sentences, as in this example from a story by Raymond Carver:

Here the simple sentences and staccato rhythm come close to real speech, and they also capture the rush of thoughts and emotions this character is feeling.

The following excerpt from Rudyard Kipling's short story "The Sing-Song of Old Man Kangaroo" is an example of syndetic parataxis:

"He was grey and he was woolly, and his pride was inordinate: he danced on a sandbank in the Middle of Australia, and he went to the Big God Ngong."

This example has the staccato rhythm typical of parataxis and, while it combines clauses with conjunctions, the sentence makes no effort to define a relationship between those clauses. The kangaroo's pride isn't inordinate because he's grey and woolly. Instead, he simply is grey and woolly and also has inordinate pride.

Parataxis often overlaps with the figures of speech asyndeton and polysyndeton, which both refer to the way that coordinating conjunctions are used. While neither asyndeton nor polysyndeton is expressly focused on creating balance in the words, phrases, or clauses of a sentence (like parataxis is), in practice these devices often overlap with asyndetic parataxis and syndetic parataxis.

The opposite of parataxis is hypotaxis. Hypotaxis is when the elements of a sentence are not all equal, and clauses are subordinated to and dependent on one another. Put another way, hypotaxis uses subordinating conjunctions to indicate the relationships of logic, space, time, or cause-and-effect within and between related sentences or clauses.

In the following example from Notes of a Native Son, James Baldwin uses hypotaxis to rank, order, and build his observations:

"In later years, particularly when it began to be clear that this 'education' of mine was going to lead me to perdition, he...warned me that my white friends in high school were not really my friends and that I would see, when I was older, how white people would do anything to keep a Negro down. Some of them could be nice, he admitted, but none of them were to be trusted and most of them were not even nice. The best thing was to have as little to do with them as possible. I did not feel this way and I was certain, in my innocence, that I never would."

It's impossible to break apart the clauses in Baldwin's sentences and have the text still make sense. He is taking the reader on a very specific journey, and the order of his understanding—and, subsequently, a reader's understanding—is crucial.

Parataxis is found in prose and in poetry. Because it produces text that is pithy, rhythmic, and imaginative in its associations and juxtapositions, parataxis is also common in advertising slogans.

Parataxis appears often in prose literature, and it was particularly common among some modernist writers after World War I. Ernest Hemingway's famous style, for instance, involves a great deal of parataxis.

This excerpt from one of Hemingway's short stories is an excellent example of parataxis, in which each sentence is simply placed, one next to the other, without any explanation or attempt at connecting the ideas in each sentence.

There were no rooms at the inn. We drove farther until we found a hotel. It was raining heavily and we got soaked on the way to the door. Our socks stank of mildew. We ate dinner there and talked little.

Parataxis allows Hemingway to describe only the surface of events, while inviting readers to interpret or fill in the unstated deeper feelings and desires of his characters. Hemingway draws the reader into a deeper world through parataxis.

Samuel Beckett is known for his clipped and abrupt language that often forces the reader to interpret its meaning. In other words, he's a frequent user of parataxis:

Beckett's example shows how parataxis can make a reader feel as if he or she is experiencing the narrative in process. Because parataxis is naturally additive, it feels as if we are in the mind of this character, experiencing one thought, then another, and another, as the character tries to find the correct words and make sense of his life.

Parataxis in Cormac McCarthy's The Crossing

The following excerpt from Cormac McCarthy's novel is an example of both parataxis and polysyndeton:

What McCarthy communicates here, and what would be difficult to communicate without parataxis and polysyndeton, is how complex and tender a seemingly simple human action can be. Nothing more is happening than a man finishing breakfast. However, McCarthy breaks down this action into all of its components, which, in turn, puts focus on each act of the meal—both that the woman performed in making it and that the man undertook in eating it. Because of parataxis, the meal becomes something the reader can't just take for granted, but rather something that must be considered in full.

In this example from Charles Dickens's Bleak House, there is parataxis between each of the sentences, and within the final sentence.

"Dogs, undistinguishable in mire. Horses, scarecely better—splashed to their very blinkers. Foot passengers, jostling one another's umbrellas, in a general infection of ill-temper, and losing their foothold at street corners..."

Each of the sentences is on equal footing, all happening at the same time, one piling up on another, with no order or hierarchy provided by the text. As a result, the passage captures the chaos and bustle of the street, the people, the dogs, and the horses. Through parataxis, the reader is made to experience this riotous scene just as a person on the street would.

Parataxis takes on a slightly different meaning when it's used in poetry; in the context of poetry, parataxis refers to two starkly dissimilar objects or ideas being placed beside each other. So this definition maintains the sense of independent entities being placed side-by-side, but it adds the condition that these entities must be different. The juxtaposition between these entities then causes readers to make their own associations and interpretations.

By this juxtaposition, or poetic parataxis, the reader must themselves imagine and interpret what connects each line.

Hazy blue dusk scales the window.
A lamp dangles like the neck of a woman.

Advertising slogans often employ parataxis. The rhythm of parataxis makes the phrase memorable, which advertisers want for their slogans.

In addition, because parataxis doesn't offer an interpretation itself, it invites the audience to "fill in the gaps" where language does not exist. Simply by reading a slogan that uses parataxis, the audience becomes an active participant in the slogan's meaning; it's the readers own interpretation, for example, that explains what makes Marines proud and unique.

Why Do Writers Use Parataxis?

There are may reasons why writers might use parataxis. A few common reasons include:

Check out these resources on other sites for even more information about parataxis. 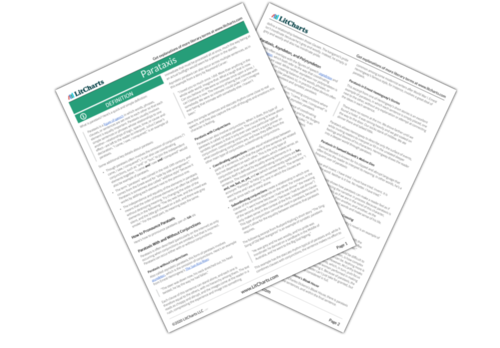