What is a caesura? Here’s a quick and simple definition:

A caesura is a pause that occurs within a line of poetry, usually marked by some form of punctuation such as a period, comma, ellipsis, or dash. A caesura doesn't have to be placed in the exact middle of a line of poetry. It can be placed anywhere after the first word and before the last word of a line. In the following line from the prologue of Romeo and Juliet, the comma after "Verona" marks a caesura: "In fair Verona, where we lay our scene."

Some additional key details about caesuras:

How to Pronounce Caesura

Here's how to pronounce caesura: sez-yoo-ra

Caesurae have been used in poetry since the time of the ancient Greeks and Romans—though, back then, the term was even more specific and referred to pauses that actually threw off the meter of a line of poetry. The Romans and Greeks, however, wrote their poetry using much more rigid conventions of meter than are used in English verse, and the word caesura has long since come to mean simply a pause in the middle of a line, such as:

In this famous line from Shakespeare's Hamlet, the dash in the middle of the line represents a pronounced pause. Read the line aloud yourself and you will hear the pause. The comma after "To be" is another example of caesura in this line, though the pause is arguably a briefer one.

When analyzing poetry, poets and scholars sometimes mark instances of caesura by using a symbol called a "double pipe," which looks like this: ||. Here's an example of how the double pipe is used to mark caesura in context:

As you can see, from this example, it is possible to have multiple caesurae in a single line of poetry.

The woods are lovely, || dark and deep

A masculine caesura, on the other hand, is one that follows a stressed syllable, as in:

My words fly up, || my thoughts remain below

Instances of caesura are also sometimes referred to based on where they occur in the line.

Beowulf is one of the oldest surviving poems written in Old English. Poems written in Old English often used lots of caesura, and Seamus Heaney's modern English translation of Beowulf does an excellent job of preserving the original text's prolific use of caesurae. This example shows that, although the use of caesurae can create an unusual or jarring rhythm that might be perceived by some as more "modern," it has actually been in use for many centuries.

A ring-whorled prow rode in the harbour,
Ice-clad, || outbound, || a craft for a prince.
They stretched their beloved lord in his boat,
Laid out by the mast, || amidships,
The great ring-giver. || Far-fetched treasures
Were piled upon him, || and precious gear.
I never heard before of a ship so well furbished
With battle tackle, || bladed weapons
And coats of mail. || The massed treasure
Was loaded on top of him: || it would travel far
On out into the ocean’s sway.

Both of the caesurae in the second line are feminine, because each pause follows an unstressed syllable: Ice-clad, || outbound, || a craft for a prince.

This excerpt from Sonnet 42 by Shakespeare contains an example of caesura in each line except the fourth.

If I lose thee, || my loss is my love's gain,
And losing her, || my friend hath found that loss,
Both find each other, || and I lose both twain,
And both for my sake lay on me this cross,

But here's the joy, || my friend and I are one,
Sweet flattery, || then she loves but me alone.

Caesura in Ashbery's "Our Youth"

This stanza from John Ashbery's poem "Our Youth" gives a more modern example of caesura using three different types of punctuation: ellipsis in the first two lines, a period in the third, and finally a comma in the fourth.

Why Do Writers Use Caesuras?

Writers use caesurae to create variation in the rhythm of a poem, or to emphasize words in the middle of lines that might not otherwise receive attention. Since line breaks in poetry tend to serve as a natural pause regardless of whether the lines are end-stopped with punctuation, the rhythm of poems with lines of equal length can become somewhat monotonous and unvaried without the use of caesurae to create pauses in the middle of lines. The use of caesurae also allows writers to formulate their thoughts and images using more complex sentence structures with different clauses and a freer use of punctuation than is possible without the use of caesurae. 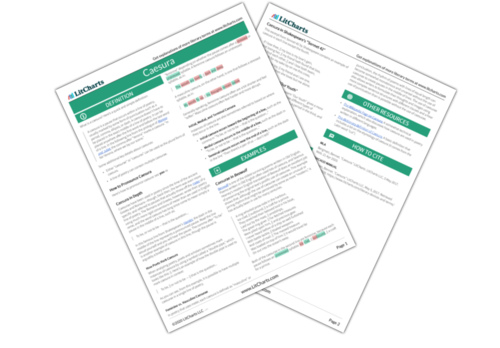