What is metonymy? Here’s a quick and simple definition:

Metonymy is a type of figurative language in which an object or concept is referred to not by its own name, but instead by the name of something closely associated with it. For example, in "Wall Street prefers lower taxes," the New York City street that was the original home of the New York Stock Exchange stands in for (or is a "metonym" for) the entire American financial industry.

Some additional key details about metonymy:

Here's how to pronounce metonymy: meh-tahn-uh-mee

Metonymy is commonly confused with three other types of figurative language:

It's helpful to understand what makes metonymy distinct from each of them.

Both metonymy and synecdoche create a relationship in which one thing or idea stands in for another. But the specific relationship between the two objects is much more precise and specific in synecdoche than it is in metonymy:

Some people actually consider synecdoche to be a subset of metonymy, since to be a part of something is, by definition, to be closely related to that thing. Other people believe that the two terms are completely distinct—that metonymy can only occur when it proposes a relationship between two things that are not part of one another, and that synecdoche can never be simultaneously metonymy. There's no definitive consensus on which of these two ways of seeing metonymy and synecdoche is correct, so you should just know that the debate exists.

Metonymy and metaphor are similar in that both are forms of figurative language that create a comparison or relationship between two different things or ideas. However, the nature of the relationship is different.

Metaphor, then, projects the meaning of one thing onto an unrelated thing. Metonymy points out that two things are so closely related that they can stand in for one another.

While metonymy proposes a relationship between two closely related things, metalepsis creates a more distant relationship between a figurative word and the thing to which it refers. This is an abstract concept, so it's best to illustrate it with an example. Take the sentence below:

The phrase "lead foot" is a metalepsis that refers to a driver who speeds. To decode the relationship between "lead foot" and its meaning of "speeding," though, you first have to understand a metonymy within the phrase itself. In this context, "lead" does not literally refer to the metal. Because lead is an uncommonly heavy material, "lead" metonymically stands in for the notion of weight. If a driver's foot is heavy, then it would press more on the gas pedal, causing the car to speed—hence, a "lead foot."

Since the relationship between "lead foot" and "speeding driver" is made not by direct association, but rather through a secondary association between lead and heaviness (a metonymy), this figure of speech is considered a metalepsis. For this reason, metalepsis is often called a "metonymy of a metonymy"—it's a metonymic association ("lead foot" with "speeding") that relies on a secondary metonymy ("lead" with "heaviness") in order to make sense.

As with synecdoche, some people consider metalepsis to be a subset of metonymy, while others consider it to be a distinct but closely-related concept.

Metonymy is everywhere in spoken and written language—it's in poetry and prose, the political jargon that fills newspapers and radio, songs, folk sayings, and more.

Many common idioms are examples of metonymy. In fact, some of these idioms seem so common and straightforward that it might be jarring to realize that their meanings aren't actually literal.

Metonymy is particularly common in speaking and writing about politics, especially within the media. This popularity may stem from the fact that metonymy allows for the replacement of long or complicated ideas with simpler (and shorter) stand-ins, and writing concisely is always a goal of journalists.

Metonymy is also often found in song lyrics. This is, in part due to the fact that associative thinking is at the heart of the creative process, in part because an unexpected word can be so evocative, and also because being able to use one word to stand in for another can be convenient for rhyme.

Metonymy in "Juicy" by Notorious B.I.G

Now I'm in the limelight 'cause I rhyme tight

Here he's using "limelight" as a metonymy for fame (a "limelight" was a kind of spotlight used in old theaters). Biggie's use of metonymy here also sets him up for a sweet rhyme.

Metonymy in "Ebony and Ivory" by Paul McCartney and Stevie Wonder

Paul McCartney and Stevie Wonder's duet "Ebony and Ivory" has the chorus:

Ebony and ivory
Live together in perfect harmony
Side by side on my piano keyboard
Oh lord, why don't we?

These lyrics contain a double metonymy in which colors (ebony and ivory, or black and white) stand in simultaneously for piano keys and race relations.

Metonymy in "Hey Jude" by The Beatles

In another Beatles-related example, the song "Hey Jude" contains the line:

Remember to let her into your heart.

Obviously, Paul McCartney doesn't mean this literally when he sings it—he's not advising someone to go find a surgeon. Since the heart is closely associated with love, the line uses metonymy to remind Jude not to close himself off to love.

Metonymy is one of the most commonly-used literary devices in both poetry and prose.

Perhaps the most iconic use of metonymy in literature comes from Shakespeare's Julius Caesar, when Mark Antony says:

Here Mark Antony is using "ears" to refer to the act of listening—he's asking everyone to pay attention to his speech.

Metonymy in John Keats "Ode to a Nightingale"

In "Ode to a Nightingale," John Keats writes the phrase:

O, for a draught of vintage! that hath been
Cool'd a long age in the deep-delved earth,

Keats is using "vintage" to mean wine, since a wine's vintage (or how old it is) is one of its essential attributes. Also, note how Keats use of metonymy here allows him to preserve the poem's meter, which is iambic pentameter. Keats' use of "vintage" instead of "wine" allows the line to weigh in at ten syllables, preserving the proper rhythm of stressed and unstressed syllables.

In the Adventures of Huckleberry Finn, Mark Twain (writing in Huck Finn's voice) often uses the metonym "body" to mean "person." For example:

These uses of metonymy help to characterize Huck as somebody who speaks idiomatically rather than in standard English. That Huck's use of metonymy here makes him seem more authentically like a poor kid from the American South in pre-Civil War days also emphasizes how common metonymy is in everyday speech.

Why Do Writers Use Metonymy?

Writers use metonymy for many reasons. Sometimes it's to find a poetic way to say something that would otherwise be plain or quotidian, much like a restaurant makes its food sound fancy by metonymically calling it a "dish." Other times a writer might seek to convey an abstract concept (like love or birth) through a concrete image (a heart or a cradle). The above examples from John Keats and Notorious B.I.G. show that writers—particularly poets—sometimes use metonymy to help preserve rhythm or rhyme. Similarly, a writer could use metonymy to enhance the sound of a passage through devices, such as assonance, alliteration, or sibilance. For example, if you wanted to open a dog spa, the alliterative and metonymic "Pampered Paws" would be a much better name than "Pampered Dogs."

More abstractly, though, metonymy is an example of the kind of associative thinking that allows literature to capture and express the complicated and non-literal experience of life. As a form of figurative language, metonymy is a way to get words to mean more than they normally would by layering figurative meanings and associations onto a word's literal meaning. Metonymy, then, helps to add complexity and mystery—it helps to add life—to works of literature. 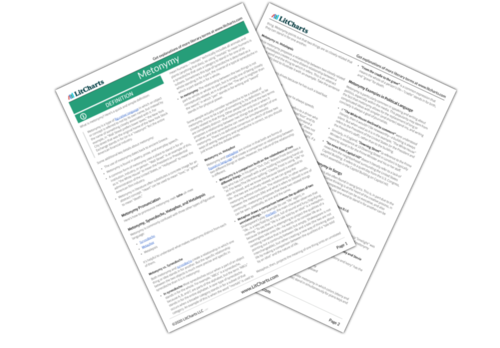