What is a figure of speech? Here’s a quick and simple definition:

Some additional key details about figures of speech:

Here's how to pronounce figure of speech: fig-yer of speech

Figures of Speech vs. Figurative Language

You might encounter people using figurative speech to mean either of the above, and it's not really possible to say which is correct. But if you know about these two different ways of relating figurative language and figures of speech, you'll be in pretty good shape.

Figures of Speech, Tropes, and Schemes

The oldest and still most common way to organize figures of speech is to split them into two main groups: tropes and schemes.

The scheme/trope classification system is by no means the only way to organize figures of speech (if you're interested, you can find all sorts of different categorization methods for figures of speech here). But it is the most common method, and is both simple and structured enough to help you understand figures of speech.

Generally, a trope uses comparison, association, or wordplay to play with the literal meaning of words or to layer another meaning on top of a word's literal meaning. Some of the most commonly used tropes are explained briefly below, though you can get even more detail on each from its specific LitCharts entry.

Schemes are mechanical—they're figures of speech that tinker with words, sounds, and structures (as opposed to meanings) in order to achieve an effect. Schemes can themselves be broken down in helpful ways that define the sort of tinkering they employ.

Some of the most commonly used schemes are explained briefly below, though you can get even more detail on each from its specific LitCharts entry.

Figures of speech can make language more inventive, more beautiful, more rhythmic, more memorable, and more meaningful. It shouldn't be a surprise, then, that figures of speech are plentiful in all sorts of written language. The examples below show a variety of different types of figures of speech. You can see many more examples of each type at their own specific LitChart entries.

Figures of Speech Examples in Literature

On and on, now east now west, wound the poor thread that once had been our drive. Sometimes I thought it lost, but it appeared again, beneath a fallen tree perhaps, or struggling on the other side of a muddied ditch created by the winter rains.

In this quote from Rebecca, Daphne du Maurier refers to a washed-out road as "the poor thread." This is a metaphor—and a trope—because the writer indirectly compares the thread to the road and expects that readers will understand that "thread" is not used literally.

Parallelism in Charles Dickens' A Tale of Two Cities

In the famous opening line of A Tale of Two Cities, Dickens uses parallelism—a scheme in which parts of a sentence repeat—in order to emphasize the contradictions of the time in which the book is set. Dickens has manipulated his sentence structure so that the parallel clauses emphasize the oppositional nature of his words ("it was the best of times, it was the worst of times"). The figure of speech doesn't play with the meaning of words, it emphasizes them through structure and repetition, which is why it is a scheme.

Alliteration in Nathaniel Hawthorne's "The Birthmark"

In this manner, selecting it as the symbol of his wife's liability to sin, sorrow, decay, and death, Aylmer's sombre imagination was not long in rendering the birthmark a frightful object, causing him more trouble and horror than ever Georgiana's beauty, whether of soul or sense, had given him delight.

This passage from "The Birthmark" uses alliteration to tie together all of the things that Georgiana's birthmark is supposed to symbolize. By using words that alliterate—"sin and sorrow" and "decay and death," for example—Hawthorne is making the reader feel that these ideas are connected, rather than simply stating that they are connected. Alliteration is a figure of speech—a scheme—because it uses the mechanics of language to emphasize meaning.

This quote from Julius Caesar comes from Marc Antony's speech at Caesar's funeral. Antony needs to hold Brutus and his conspirators accountable for Caesar's death without contradicting the crowd's positive impression of Brutus, so Antony uses verbal irony to simultaneously please and trouble the crowd. On the surface, Antony says what the audience wants to hear (that Brutus is honorable), but it becomes clear over the course of his speech that he means the opposite of what he says (and over time he convinces the audience to believe this opposite meaning as well). This is a figure of speech (a trope) because it's based on a play on the meaning of Antony's words.

Figures of Speech Examples in Music

Figures of speech are also common in music. Schemes fit naturally with songs because both schemes and songs manipulate sound and rhythm to enhance the meanings of words. Music also uses many tropes, because using words that have meanings beyond their literal ones makes language more interesting, and it allows songwriters to create music that uses just a few words to imply a complex meaning.

Assonance and Metaphor in Rihanna's "Diamonds"

Rihanna uses assonance when she repeats the "eye" sound throughout the chorus of "Diamonds." This make the words echo one another, which emphasizes the similarity between the singer, the person she's talking about, and the "diamonds in the sky" to which she's comparing them both. Assonance is a scheme because it's using the sound of words—not their meaning—to draw a parallel between different things.

Rihanna also uses the phrase "Diamonds in the sky" as a metaphor for stars. This is a trope—a phrase that means something other than what it literally says—as Rihanna obviously doesn't think that there are actually diamonds in the sky. This verse is a good example of how figures of speech can often work together and overlap. In this case, the metaphor that allows her to use "diamonds" instead of "stars" also fits into her use of assonance (because "stars" lacks the "eye" sound).

Another turning point, a fork stuck in the road
Time grabs you by the wrist, directs you where to go

While the first line of this song uses "a fork stuck in the road" as a metaphor for a choice, the more arresting figure of speech at work here is the personification of time in the second line. By giving "time" human characteristics—the ability to grab a person and tell them where to go—Green Day is helping listeners to make sense of the power that time has over people. This is a trope because the line doesn't mean what it literally says; instead, it's asking listeners to make a comparison between the characteristics of time and the characteristics of a person.

Straight up racist that sucker was
Simple and plain

In the line "Straight up racist that sucker was," Public Enemy uses anastrophe (which is the inversion of typical word order) to preserve the rhythm of the verse. Instead of saying "That sucker was straight up racist," Public Enemy chooses an odd phrasing that has one stressed syllable followed by two unstressed syllables— "racist that sucker was/Simple and plain." This way, the beat falls more regularly across those two lines, which allows the rapper to make his point (that Elvis was racist) without the flow sounding awkward. Since anastrophe manipulates the order of words in order to achieve a rhythmic effect, it's a scheme.

Why Do Writers Use Figures of Speech?

Schemes (figures of speech that manipulate sound, syntax, and word order) can make language more beautiful, persuasive, or memorable. Writers can use schemes to draw attention to an important passage, to create a sound that mirrors (or contrasts with) the meaning of words, or to give language a rhythm that draws the reader in. As schemes tend to work through sound and rhythm, they generally produce a visceral effect, or an effect felt in the body—broadly speaking, schemes are more sensory than intellectual.

In contrast, writers use tropes to grab the reader intellectually by adding complexity or ambiguity to an otherwise simple word or phrase. Tropes can ask the reader to make a comparison between two unlike things, they can impose human qualities on nonhumans, and they can mean the opposite of what they say. Tropes engage the intellect because the reader has to be alert to the fact that tropes do not use language at face value—a trope never means what it literally says.

All figures of speech help a writer to communicate ideas that are difficult to say in words or that are more effectively communicated non-verbally. This could be by repeating harsh consonants to create a scary atmosphere, or by using a metaphor to impose the qualities of something concrete (say, a rose) onto something more difficult to define (say, love). In general, figures of speech attempt to bring out a reader's emotion and to capture their attention by making language more colorful, surprising, and complex.

Other Helpful Figure of Speech Resources 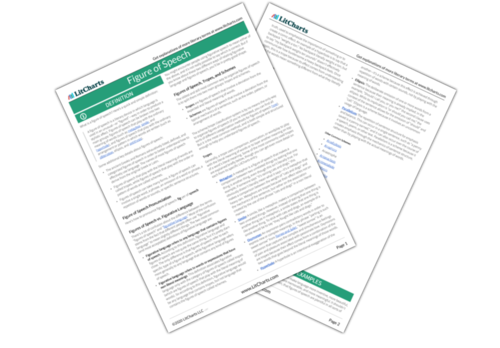