What is a red herring? Here’s a quick and simple definition:

A red herring is a piece of information in a story that distracts readers from an important truth, or leads them to mistakenly expect a particular outcome. Most often, the term red herring is used to refer to a "false clue"—a piece of evidence that misleads readers to believe that a crime (or other action) was committed by someone other than the actual culprit.

Red herrings can be either coincidental or intentional.

Origin of the Term Red Herring

Learning the origin of the term "red herring" might help you to remember its meaning. Red herring is a pungent type of pickled fish, but people began to use the term to describe a false or misleading clue because of the way that this pickled fish was often used to train hunting dogs.

Dog trainers would teach dogs to hunt by creating a trail of scent for dogs to follow, but a hunting dog needs to be able to follow the scent of a single animal without being distracted by other interesting scents. To test the dogs' abilities, the trainers would supposedly drag a smelly pickled fish across the trail the dogs were supposed to follow in an attempt to mislead the dogs. Thus, in literature, a red herring is a false clue that leads readers or characters astray.

The following examples of red herrings in literature are taken from both mystery novels and genres of literature. They illustrate the range of ways the plot device can be used to add complexity and suspense to a plot.

Red Herring in A Study in Scarlet by Arthur Conan Doyle

In A Study in Scarlet, police inspector Lestrade finds the the word "RACHE" written in blood on a wall at the scene of a murder. He assumes that the murderer had begun to write the name Rachel, but then had to flee the scene before he could finish. The novel's protagonist, Sherlock Holmes, informs Lestrade that "rache" in fact is German for "revenge" and warns him not to waste time looking for a woman named Rachel. Later, however, Sherlock comes to the conclusion that the clue is actually a red herring—a clue intentionally planted to mislead the police. He tells his assistant:

As to poor Lestrade’s discovery it was simply a blind intended to put the police upon a wrong track, by suggesting Socialism and secret societies. It was not done by a German. The A, if you noticed, was printed somewhat after the German fashion. Now, a real German invariably prints in the Latin character, so that we may safely say that this was not written by one, but by a clumsy imitator who overdid his part. It was simply a ruse to divert inquiry into a wrong channel.

In this case, the word "RACHE" is an intentional red herring because the murderer purposefully created a "false clue" in the hopes that it would lead investigators astray. In this instance, "RACHE" also acts as a kind of double red herring: the clue briefly misleads Sherlock in the way that the murderer intended it to, but it misleads Lestrade in a completely different way because Lestrade does not know the German word for revenge. The red herring opens the door to many different interpretations of the story's events, building a sense of suspense and curiosity that pushes the reader to keep reading.

Red Herring in And Then There Were None by Agatha Christie

In And Then There Were None, ten people who are guilty of murder but were never convicted for their crimes are invited to a remote island. Their host never appears, and the guests find themselves trapped. One by one, they begin to die in ways resembling the deaths of the characters in the nursery rhyme "Ten Little Soldiers," and the guests realize that someone on the island is planning their deaths. After the number of guests still alive drops to five, Justice Wargrave is shot and Doctor Armstrong disappears, leaving only three people in the house: Vera,  Lombard, and Blore. Vera remembers that a verse of the nursery rhyme mentions a red herring:

"You've forgotten the nursery rhyme. Don't you see there's a clue there?" She recited in a meaning voice: "Four little Indian boys going out to sea; A red herring swallowed one and then there were three." She went on: "A red herring—that's the vital clue. Armstrong's not dead... He took away the china Indian to make you think he was. You may say what you like—Armstrong's on the island still. His disappearance is just a red herring across the track..."

Vera is right that they have been tricked, but in fact, Wargrave is the one who has orchestrated the guests' deaths. In the novel's epilogue, we learn that Armstrong agreed to help Wargrave fake his own death, and Wargrave then killed Armstrong. Wargrave's apparent murder by Armstrong is the novel's red herring. This is an intentional red herring, as Wargrave planned to fake his own death, and timed Armstrong's disappearance as the fourth-to-last so that the poem would suggest that Armstrong's death was the one that had been faked.

In the first chapter of Great Expectations, the protagonist, Pip, meets an escaped convict in a graveyard. After the convict threatens him, Pip agrees to help the man by bringing him food and a metal file to free him from his leg iron. Not long after, Pip is invited to the home of the wealthy Miss Havisham and her niece, Estella, and makes a series of visits there. When Pip learns that an anonymous benefactor will pay for him to be educated as a gentleman, he assumes that his new patron is Miss Havisham; many years later, he meets the convict, Provis, again and discovers that his guess was incorrect. Provis tells Pip:

Yes, Pip, dear boy, I’ve made a gentleman on you! It’s me wot has done it! I swore that time, sure as ever I earned a guinea, that guinea should go to you. I swore arterwards, sure as ever I spec’lated and got rich, you should get rich. I lived rough, that you should live smooth; I worked hard, that you should be above work. What odds, dear boy? Do I tell it, fur you to feel a obligation? Not a bit. I tell it, fur you to know as that there hunted dunghill dog wot you kep life in, got his head so high that he could make a gentleman,—and, Pip, you’re him!

At first, the "mystery" of Pip's benefactor does not seem to be much of a mystery at all—it seems clear that Miss Havisham paid for his education. However, Pip's visits with Miss Havisham were a coincidental red herring, leading Pip and the reader to believe that the money had come from a legitimate source. Therefore, Pip's understanding of his own life and his social class are completely transformed by his discovery that a convict—not an heiress—had funded his education. Miss Havisham is a coincidental red herring because she had no way of knowing that Pip's education would be paid for by anyone, and Provis had no way of knowing that Pip knew a wealthy heiress, so no one in the story intended for Pip to be misled.

Why Do Writers Use Red Herrings?

Without misleading evidence to lead them astray, it would often be too easy for clever readers to guess how a story will end. Therefore, writers rely on red herrings to build suspense in their stories and keep readers guessing about what will happen next. Many readers like to try to "solve" the mystery at the center of a story as they read, guessing ahead about how it will end. Yet, many of the most memorable stories reach an entirely different conclusion from the one readers were led to expect. The exciting and satisfying plot twists that make so many novels and films suspenseful would not work without the red herrings which lead the audience to mistakenly expect the story to resolve in a different way. 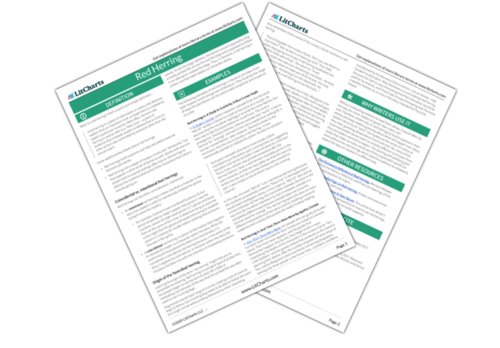