What is a parody? Here’s a quick and simple definition:

A parody is a work that mimics the style of another work, artist, or genre in an exaggerated way, usually for comic effect. Parodies can take many forms, including fiction, poetry, film, visual art, and more. For instance, Scary Movie and its many sequels are films that parody the conventions of the horror film genre.

Some additional key details about parodies:

How to Pronounce Parody

Here's how to pronounce parody: par-uh-dee

Parody can range from the lighthearted to deeply satirical. In fact, the Greek word on which parody is based, parodia, suggests these two options, as it can be translated to mean either "beside-song" or "counter-song." A parody must always work off of an original source, but it can either work against that source, or simply alongside it, as a more light-hearted commentary that doesn't necessarily mock or satirize the original work.

The success of any parody depends on the audience's familiarity with the work being parodied. To really get the full significance of one of Weird Al Yankovic's videos, for instance, you first have to know about the style and content of the original video it's parodying. In fact, a large part of what makes parodies so popular is the way they make the audience feel intelligent, well-read, or "in on the joke," since their comedic effect depends on the audience understanding the cultural references being made.

Parody is related to and often confused with three other literary terms: satire, burlesque, and pastiche.

Parody and satire share a few fundamental elements. Both often use exaggeration to illuminate the flaws and absurdities of a figure or social entity. However, there are also important differences between them: The definitions of parody and burlesque overlap considerably, with both often listed as synonyms for the other. A burlesque is a theatrical or literary caricature that mocks or spoofs a more serious subject, bringing the high-brow down to the realm of the low-brow. Like parody, burlesque often uses exaggeration, absurdity, and imitation. However, there are important differences between the two:

Parody and Pastiche
Pastiche is also often used as a synonym for parody. And like parody, pastiche is a type of art based on imitation. A pastiche is a piece of art composed in the style or manner of another era, aesthetic movement, or artist. But, again, there are key differences between the two:

For instance, the recent film La La Land could be described as a pastiche of classic Hollywood musical styles—but the film celebrates the musical tradition rather than making fun of or satirizing it. And while La La Land has its humorous moments, it doesn't get that humor from its imitation of the original material.

In the literary arts, parody is everywhere. The following examples parody poems, novels, and entire genres.

Parody of a Poem

Kenneth Koch's "Variations on a Theme by William Carlos Williams" is a poem that parodies the ultra-minimalist style of Williams by co-opting the style for a more bizarre subject matter. First see the reference poem, "This is Just to Say" by William Carlos Williams, and note how the ceremoniousness of the poem creates a pleasing juxtaposition with the relatively minor transgression being confessed:

I have eaten
the plums
that were in
the icebox

and which
you were probably
saving
for breakfast

Forgive me
they were delicious
so sweet
and so cold

And here's the parody by Kenneth Koch:

I chopped down the house that you had been
saving to live in next summer.
I am sorry, but it was morning, and I had
nothing to do
and its wooden beams were so inviting.

By changing the crime from "eating your plums" to "chopping down your house," Koch seems to be commenting on the preciousness and melodrama of William's poem.

Parody of a Novel

It is a truth universally acknowledged, that a single man in possession of a good fortune, must be in want of a wife.

And the first sentence from Grahame-Smith's Pride and Prejudice and Zombies:

It is a truth universally acknowledged that a zombie in possession of brains must be in want of more brains.

As you can see, Grahame–Smith takes Austen's exact wording but subverts our expectations by transposing her style onto the content of modern zombie fiction. The parody may be funny to any reader, but it's bound to be more funny to readers who are familiar with Pride and Prejudice. This example underscores a basic fact about parodies: their success hinges on a shared understanding of the source material, and the resulting upheaval of a set expectation.

Parody of a Genre

Cervantes' Don Quixote is perhaps the ultimate example of genre parody. Cervantes' epic novel is a parody of the medieval romance genre of literature, in which a chivalrous knight goes on a heroic quest, often to win the heart of an impossibly beautiful maiden. The protagonist of Cervantes novel, Don Quixote de la Mancha, however, is a madman who battles with windmills he thinks are giants, confuse peasants for princesses, and gets himself into all sorts of absurd situations because he can't tell the difference between his fantasy world of knights and chivalry and the real world in which he lives. Don Quixote is a parody because it mocks the sentimental and overblown style of the romance, and exposes the genre's conventions. For instance, when Don Quixote mistakes an inn for a castle, the knight (along with the whole genre of medieval romance) is being cast as a subject of mockery:

And since whatever our adventurer thought, saw, or imagined seemed to him to be as it was in the books he'd read, as soon as he saw the inn he took it for a castle with its four towers and their spires of shining silver.

Parody in Film and Television

Parody films and parody television shows are a staple of Western comedy culture. The film parody relies, as most parodies do, on the audience's expectations. The director Mel Brooks, a master parodist, spoofed the genre of monster movies with his film Young Frankenstein (1974), the entire Western film genre with Blazing Saddles (1974), and the Star Wars franchise with Space Balls (1987). More recently, there's been a string of film franchises that spoof more contemporary genres, such as Scary Movie, which absurdly tweaks scenes from famous horror movies in order to highlight the audience's familiarity with the plot devices that constitute the genre.

The "Weekend Update" portion of Saturday Night Live, meanwhile, mocks the look and structure of primetime news shows, making a parody of television broadcast networks themselves. More generally, nearly every sketch comedy show on television includes parodies of famous politicians and cultural figures as a part of the entertainment.

Why Do Writers Choose to Write Parodies?

Writers can choose to write parodies for light-hearted reasons or because they want to use them to make more pointed satirical commentary. Regardless, parody is always meant to be entertaining. A parody of a public persona—like a politician, for example—might serve to ridicule his personality, or hold him to account for criminal behavior, but the audience is still meant to laugh at the parody. A parody of a great writer, on the other hand, might exist purely to pay homage to his style, providing no social commentary at all—but again, the reader is meant to find it amusing or entertaining when they read a passage that imitates a work they're familiar with. Enjoyment of the parody signals that the audience recognizes the reference, while also recognizing the gap between the source material and the parody version.

Whether a parody serves to ridicule a facet of pop culture, expose the falsehoods of a social institution, pay homage to a great artist, or simply poke fun with a pitch-perfect spoof, the parody is an important device that entertains the audience by imitating something familiar from culture and putting a new spin on it. 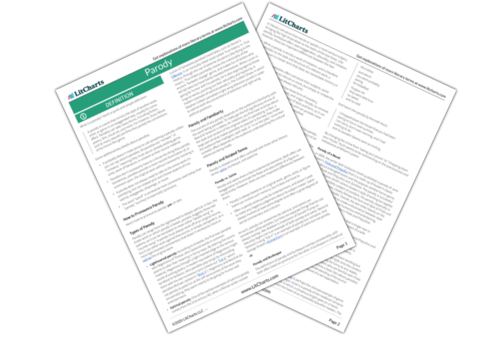