What is falling action? Here’s a quick and simple definition:

The falling action of a story is the section of the plot following the climax, in which the tension stemming from the story's central conflict decreases and the story moves toward its conclusion. For instance, the traditional "good vs. evil" story (like many superhero movies) doesn't end as soon as the force of evil has been thwarted. Rather, there tends to be a portion of the story in which the hero must restore regular order to the world, clean up the mess they made, or make a return journey home. This is all part of the "falling action."

The falling action is an important but often overlooked part of plot structure in which the central conflict of the story is moved toward complete resolution. Generally speaking, most works of writing that have a plot can be said to have a section of falling action. But not every story has a falling action—and even for stories that do contain it, the falling action isn't always well-defined or easy to identify. Here are a few of the key defining features of falling action to help you identify it:

Falling action is often confused with dénouement, a separate part of the structure of plot. The dénouement is part of the general process of bringing the story to a point of resolution, so it's easy to see why it would be confused with falling action, but the two parts have some very specific, key differences that are important to understand.

To fully understand what makes dénouements different from falling action, take a look through our entry on dénouement, where you can find some clear examples.

One of the first and most influential people to create a framework for analyzing plots was 19th-century German writer Gustav Freytag, who argued that all plots can be broken down into five stages:

Freytag originally developed this theory as a way of describing the plots of plays at a time when most plays were divided into five acts, but his five-layered "pyramid" can also be used to analyze the plots of other kinds of stories, including novels, short stories, films, and television shows. Here's the pyramid as originally defined by Freytag:

One important thing to note about the shape of Freytag's pyramid is that it shows all parts of the story as having equal length, with climax at the very center of the diagram. However, this is actually a bit misleading, since the falling action is usually much shorter than the rising action, and begins close to the story's end rather than in the middle. Therefore, a slightly more accurate version of Freytag's pyramid (modified to show a shorter, later falling action) might look something like this:

In the examples that follow, we'll explain each story's falling action in relation to its overall plot so you have a full understanding of how falling action operates within the story.

In Tennessee Williams's  A Streetcar Named Desire, the rising action begins when Blanche Dubois arrives at the home of her sister, Stella, and reveals that she has, under mysterious circumstances, lost possession of their childhood home. Stanley, Stella's husband, is immediately suspicious of Blanche, who in turn is very critical of Stanley and derides him constantly for his low class and "primitive" ways. The tension between these three characters grows over the course of the months that Blanche stays with the couple in their tiny apartment, and the mystery around the circumstances prompting Blanche's visit also continues to grow, until one day Stanley tells Stella everything he has heard about Blanche's sordid past from others: that she was fired from her teaching job for having an affair with a seventeen-year-old boy, and began working as a prostitute at a local hotel. Tension reaches a new height after this revelation, as it's unclear how all the various characters will respond to the new information. The play reaches a climax when Stanley finally confronts Blanche and, it's strongly suggested, rapes her.

In the following scene, weeks have passed, and Blanche's mental state has deteriorated completely. It seems that she has told Stella about her rape, but that Stella doesn't believe her. It's revealed that Stella and Stanley have made arrangements to have Blanche committed to a mental asylum. A doctor and nurse arrive to take Blanche away. Seeming to have only the vaguest understanding of what's happening, Blanche reluctantly agrees to go with the doctor. The scene constitutes the entirety of the play's falling action, ending with the resolution (a direct consequence of the climax): Blanche has lost her mind.

Falling Action in The Lord of the Rings

J.R.R. Tolkien's "Lord of the Rings" trilogy tells the story of Frodo, a hobbit who must journey to a dangerous and faraway land in order to throw a magical ring into a volcano and, in doing so, destroy Sauron, a major force of evil that threatens the entire world, including everyone he loves. People often say that the final book (or film) of the trilogy ends with one climax after another, in a seemingly endless succession. But this is actually a mistake. While it's true that the plot of the film continues for quite some time after the climax (in which the ring and Sauron are destroyed), it is not the case that each new plot development that occurs after the film's climax is a climax in its own right. Rather, many of the seemingly "climactic" plot developments that follow the actual climax are part of the falling action, in which the heroes must make the long journey home.

For instance, the scene immediately following the climax—in which the volcano erupts and the heroes must escape—is part of the falling action sequence. The tension stemming from the central conflict has already been dispelled, but some tension remains surrounding the question of how and whether the heroes will get home.

What's the Function of Falling Action in Literature?

Not all pieces of writing that have plots also make use of falling action—some plots end very suddenly after the climax, for example—but most plots do have a section in which the action "unwinds." That's because the falling action serves many different purposes in a story. Here are some of the main reasons a writer might build their plot with a section of falling action: 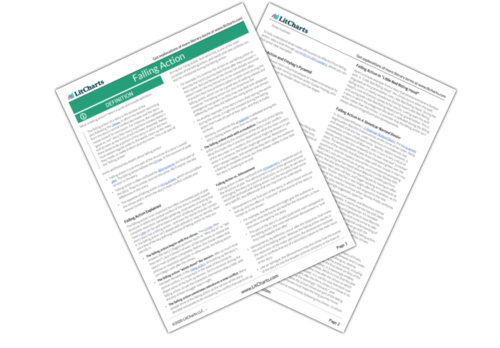