What is figurative language? Here’s a quick and simple definition:

Figures of Speech and Figurative Language

The Different Things People Mean When They Say Figurative Language

What does all that boil down to for you? If you hear someone talking about figurative language, you can usually safely assume they are referring to language that uses figures of speech to play with the meaning of words and, perhaps, with the way that language sounds or feels.

There are many, many types of figures of speech that can be involved in figurative language. Some of the most common are:

Many people (and websites) argue that imagery is a type of figurative language. That is actually incorrect. Imagery refers to a writers use of vivid and descriptive language to appeal to the reader's senses and more deeply evoke places, things, emotions, and more. The following sentence uses imagery to give the reader a sense of how what is being described looks, feels, smells, and sounds:

The night was dark and humid, the scent of rotting vegetation hung in the air, and only the sound of mosquitoes broke the quiet of the swamp.

The night was dark and humid, heavy with a scent of rotting vegetation like a great-aunt's heavy and inescapable perfume, and only the whining buzz of mosquitoes broke the silence of the swamp.

In this sentence, the description has been made more powerful through the use of a simile ("like a great-aunt's..."), onomatopoeia ("whining buzz," which not only describes but actually sounds like the noise made by mosquitoes), and even a bit of alliteration in the "silence of the swamp."

Figurative language is more interesting, lively, beautiful, and memorable than language that's purely literal. Figurative language is found in all sorts of writing, from poetry to prose to speeches to song lyrics, and is also a common part of spoken speech. The examples below show a variety of different types of figures of speech. You can see many more examples of each type at their own specific LitChart entries.

Metaphor in Shakespeare's Romeo and Juliet

But, soft! what light through yonder window breaks?
It is the east, and Juliet is the sun.

Romeo compares Juliet to the sun not only to describe how radiantly beautiful she is, but also to convey the full extent of her power over him. He's so taken with Juliet that her appearances and disappearances affect him like those of the sun. His life "revolves" around Juliet like the earth orbits the sun.

In this example of a simile from Slaughterhouse-Five, Billy Pilgrim emerges from an underground slaughterhouse where he has been held prisoner by the Germans during the deadly World War II firebombing of Dresden:

It wasn't safe to come out of the shelter until noon the next day. When the Americans and their guards did come out, the sky was black with smoke. The sun was an angry little pinhead. Dresden was like the moon now, nothing but minerals. The stones were hot. Everybody else in the neighborhood was dead.

Vonnegut uses simile to compare the bombed city of Dresden to the moon in order to capture the totality of the devastation—the city is so lifeless that it is like the barren moon.

These lines from Chapter 7 of Ernest Hemingway's For Whom the Bell Tolls describe an encounter between Robert Jordan, a young American soldier fighting in the Spanish Civil War, and his lover María.

She held herself tight to him and her lips looked for his and then found them and were against them and he felt her, fresh, new and smooth and young and lovely with the warm, scalding coolness and unbelievable to be there in the robe that was as familiar as his clothes, or his shoes, or his duty and then she said, frightenedly, “And now let us do quickly what it is we do so that the other is all gone.”

The couple's relationship becomes a bright spot for both of them in the midst of war, but ultimately also a source of pain and confusion for Jordan, as he struggles to balance his obligation to fight with his desire to live happily by Maria's side. The contradiction contained within the oxymoron "scalding coolness" emphasizes the couple's conflicting emotions and impossible situation.

Elizabeth Bennet, the most free-spirited character in Pride and Prejudice, refuses Mr. Darcy's first marriage proposal with a string of hyperbole:

From the very beginning, from the first moment I may almost say, of my acquaintance with you, your manners impressing me with the fullest belief of your arrogance, your conceit, and your selfish disdain of the feelings of others, were such as to form that ground-work of disapprobation, on which succeeding events have built so immoveable a dislike; and I had not known you a month before I felt that you were the last man in the world whom I could ever be prevailed on to marry.

Elizabeth's closing statement, that Darcy is the "last man in the world" whom she would ever marry, is an obvious hyperbole. It's hard to believe that Elizabeth would rather marry, say, an axe murderer or a diseased pirate than Mr. Darcy. Even beyond the obvious exaggeration, Austen's use of hyperbole in this exchange hints at the fact that Elizabeth's feelings for Darcy are more complicated than she admits, even to herself. Austen drops various hints throughout the beginning of the novel that Elizabeth feels something beyond mere dislike for Darcy. Taken together with these hints, Elizabeth's hyperbolic statements seem designed to convince not only Darcy, but also herself, that their relationship has no future.

In Chapter 1 of The Scarlet Letter, Nathaniel Hawthorne describes a wild rose bush that grows in front of Salem's gloomy wooden jail:

But, on one side of the portal, and rooted almost at the threshold, was a wild rose-bush, covered, in this month of June, with its delicate gems, which might be imagined to offer their fragrance and fragile beauty to the prisoner as he went in, and to the condemned criminal as he came forth to his doom, in token that the deep heart of Nature could pity and be kind to him.

In the context of the novel's setting in 17th century Boston, this rose bush, which grows wild in front of an establishment dedicated to enforcing harsh puritan values, symbolizes those elements of human nature that cannot be repressed, no matter how strict a community's moral code may be: desire, fertility, and a love of beauty. By personifying the rosebush as "offering" its blossoms to reflect Nature's pity (Nature is also personified here as having a "heart"), Hawthorne turns the passive coincidence of the rosebush's location into an image of human nature actively resisting its constraints.

In Act 3, Scene 3 of Shakespeare's The Tempest, Caliban uses onomatopoeia to convey the noises of the island.

Be not afeard. The isle is full of noises,
Sounds, and sweet airs that give delight and hurt not.
Sometimes a thousand twangling instruments
Will hum about mine ears, and sometime voices...

The use of onomatopoeia makes the audience feel the sounds on the island, rather than just have to take Caliban's word about there being noises.

In Act 4, Scene 3 of Shakespeare's Macbeth, an angry Macbeth kicks out a servant by saying:

Here, "thy face" stands in for "you." Macbeth is simply telling the servant to leave, but his use of synecdoche makes the tone of his command more harsh and insulting because he uses synecdoche to treat the servant not as a person but as an object, a body part.

Now I'm in the limelight 'cause I rhyme tight

Here he's using "limelight" as a metonymy for fame (a "limelight" was a kind of spotlight used in old theaters, and so it came to be associated with the fame of being in the spotlight). Biggie's use of metonymy here also sets him up for a sweet rhyme.

In his song "Rap God," Eminem shows his incredible lyrical dexterity by loading up the alliteration:

So I wanna make sure, somewhere in this chicken scratch I
Scribble and doodle enough rhymes
To maybe try to help get some people through tough times
But I gotta keep a few punchlines
Just in case, ‘cause even you unsigned
Rappers are hungry looking at me like it's lunchtime…

Why Do Writers Use Figurative Language? 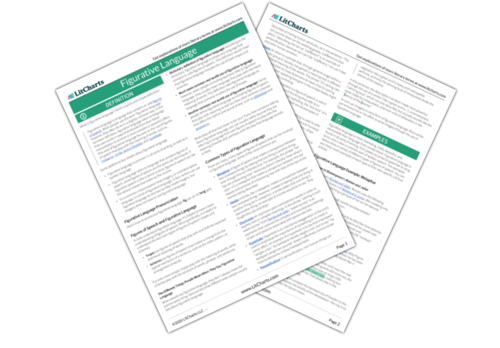