What is verbal irony? Here’s a quick and simple definition:

Verbal irony occurs when the literal meaning of what someone says is different from—and often opposite to—what they actually mean. When there's a hurricane raging outside and someone remarks "what lovely weather we're having," this is an example of verbal irony.

The Origins of Irony

Verbal irony first came into use thousands of years ago, in Ancient Greece. The word "irony" comes from the Greek word eiron, a stock character in ancient Greek comedy who feigns stupidity in order to deceive and defeat the alazon, an incompetent show-off. Both characters pretend to be something other than what they are: the eiron is not actually stupid, while the alazon is not actually capable. This contrast between "what seems to be" and "what is" is the root of all the different kinds of irony.

When someone says "My, what lovely weather we're having" on an awful, rainy day, her actual meaning is clear: she means just the opposite of what she says. When the actual meaning of an ironic statement is clear, it is called stable irony.

But an ironic speaker does not always mean the exact opposite of what they say, and sometimes the true meaning of their words remains obscure. Cases such as these are referred to as unstable irony. For instance, if you were standing in an elevator when a stranger turned to you and said in a deadpan tone, "I'm on fire," when in fact they were not on fire, it would be immediately clear to you that they didn't mean what they were saying literally. But it probably wouldn't be clear to you exactly what they did mean. (Is the person feeling itchy? Are they making a killing in the stock market? Is it too hot out?) In an example like this, it's clear that the speaker doesn't mean what they're saying literally, but what they do mean is unclear.

So to sum up the difference between stable and unstable verbal irony:

Two of the most common tactics of verbal irony are to use overstatement or understatement.

Verbal irony is often confused with the term sarcasm. But there are important differences between the two.

Most people can probably think of times they've heard verbal irony employed in everyday conversation, but it also appears frequently in literature, television, and various forms of political satire.

Oscar Wilde frequently spoke in ironic aphorism, and so did his characters. In his play An Ideal Husband, the fashionable and foppish Lord Goring says:

Oh! I am not at all romantic. I am not old enough. I leave romance to my seniors.

His quip is an example of subtle verbal irony. Goring implies that the idea of "romance" is boring and staid, only suited to elderly people, and that true romance lies elsewhere. The irony of the phrase depends on understanding that Goring is, in fact, a hopeless romantic—always flirting, always concerned with his appearance, and always entangled in some overcomplicated love affair. When his words are taken in context, it becomes clear that Goring really means the opposite of what he says: he says "I am not romantic" but he really means "I am a true romantic."

Professor Higgins, from Pygmalion, is another character that often uses verbal irony. In one scene, Higgins's housekeeper asks him not to swear, and he replies indignantly:

"I swear! I never swear. I detest the habit. What the devil do you mean?"

The reply is clearly ironic, because Higgins claims to hate swearing, but then immediately swears with obvious relish.

A subtler example of verbal irony comes from Jane Austen's Pride and Prejudice, which begins with the sentence:

It is a truth universally acknowledged, that a single man in possession of a good fortune must be in want of a wife.

The sentence is ironic because its speaker claims to believe that all wealthy single men must be looking for wives, but the book then goes on to describe just the opposite: it's about eligible young women looking to marry wealthy single men. The implication (which may not be clear until later in the novel) is that this "universally acknowledged" truth proves not to be supported by real experience.

One of the most ironic characters on TV is the star of an MTV show from the '90s called Daria. It is rare to find a moment when Daria isn't being ironic. Below is an excerpt from a dialogue between Daria and her art teacher:

Ms. Defoe: Good work, Daria. Your cube is bursting out of the picture plane. You've really created the illusion of depth.
Daria: I'm thinking of going into politics.

Daria's response is ironic because she obviously has no desire to go into politics. Her comment is also satirical because she likens politics to an art of illusion-making.

Another famous ironic character is Hawkeye Pierce from the show M*A*S*H. Like Daria, he rarely says what he means. Take the following dialogue as an example:

Henry: Pierce, are you scared?
Hawkeye: Don't be silly. I'm too frightened to be scared.

Hawkeye's retort is ironic because he claims not to be scared, but means just the opposite.

Shows like Comedy Central's The Colbert Report, magazine columns like The New Yorker's Borowitz Report, and satirical news websites like The Onion frequently use irony to criticize politics and culture.

One of the Onion's favorite strategies is to exaggerate a real cultural or political tendency to an extreme that reveals its stupidity or cruelty; in other words, an article will make a claim whose obvious absurdity lets the reader know that the author believes something quite different. Take the following Onion headline from December of 1995:

"Clinton Deploys Vowels to Bosnia; Cities of Sjlbvdnzv, Grzny to Be First Recipients"

The article goes on to praise Bill Clinton for sending "the critically needed letters A, E, I, O, and U" to a country in the midst of a humanitarian crisis. In fact, the writers are bitterly mocking the Clinton administration for offering insufficient aid to dying people.

Why Do Writers Use Verbal Irony?

Verbal irony is a device that can be used for almost any purpose. Writers use irony:

Verbal irony always requires some interpretation on the reader's part, since the non-literal meaning of what's been said has to be inferred based on context, so irony could be said to involve a certain level of "audience participation"—a fact which adds to the element of entertainment. In other words, verbal irony is often delivered with a figurative "wink and a nod" that suggest, "I know you understand what I mean."

Like all kinds of irony, verbal irony rides on the tension between appearances and reality, and so it can also serve to highlight differences in the perspectives of different people and characters. 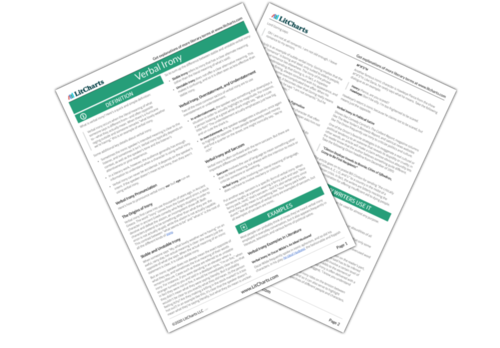