What is hubris? Here’s a quick and simple definition:

Hubris refers to excessive pride or overconfidence, which drives a person to overstep limits in a way that leads to their downfall. In Greek mythology, the legend of Icarus involves an iconic case of hubris: Icarus is given artificial wings made of wax and feathers so that he can fly (a superhuman feat), but he ignores his father's warnings and flies too close to the sun, melting his wings and drowning in the ocean.

Some additional key details about hubris:

Here's how to pronounce hubris: hyoo-briss

The Evolution of Hubris

The meaning of hubris has subtly changed and expanded over time.

In literature, hubris is often closely related to hamartia, which is the tragic flaw that leads to a character's reversal of fate and downfall. While there are many different types of tragic flaws, hubris is one of the most common. For example, it can be argued that in works of literature as different as Oedipus Rex, Frankenstein, and All the King's Men, hubris is the hamartia that leads to each of the heroes' downfalls.

Hubris plays a critical role in myths and stories from ancient to modern times.

Hubris appears in many Greek myths, often as an example of hamartia, or a tragic flaw that leads to the hero's downfall. These stories serve as a cautionary tale against mortal impiety toward the gods.

Hubris in the Myth of Niobe

The tragic Greek myth of Niobe is a story in which the punishment for hubris far exceeds the crime. According to Homer's The Iliad, the queen of Thebes (Niobe) had six sons and six daughters, and she foolishly bragged about this to the goddess Leto, who had only two children: Artemis and Apollo. When Artemis and Apollo heard of Niobe's pridefulness, Apollo killed all of Niobe's sons and Artemis killed all her daughters. The punishment for Niobe's pride—and her disregard for the gods' superiority to mortals—left her crippled by her grief and unable to stop weeping, even after she was later turned to a rock. (The story is thought to have originated as an explanation for a rock on Mt. Sipylus that resembles a woman and often has water seeping from it.)

Hubris in the Myth of Arachne

In the version of this myth that appears in Metamorphoses by the Roman poet Ovid, Arachne was a girl of humble origins who became an exceptional weaver. One day, Arachne boasted that her skill as a weaver surpassed even that of the goddess Athena. Displeased by the display of pride, Athena challenged Arachne to a contest to determine who was truly the better weaver. In the end, Arachne produced the more beautiful tapestry, which enraged Athena and drove her to shred the tapestry to pieces and turn Arachne into a spider. In this tale, it's important to note, Arachne really was supremely gifted, so her pride may have been warranted—and yet, she still displayed hubris in that she defied the gods and the divine order, which led to divine punishment.

Hubris appears in texts from ancient Greek drama, to the Bible, to modern literature.

The Ancient Greek tragedy Antigone is a great example of hubris, but it may be hard to see why without a certain level of familiarity with Greek religious customs. In the play, the King of Thebes decrees that no one may bury a man named Polynices, who had led a rebellion against the throne and died—but the man's sister (Antigone, for whom the play is named) breaks this law and gives her brother a burial anyway. When she's called before the king to account for her crime, she argues that the right to a proper burial is a divine law, and that it should therefore take precedence over the law of the king. As punishment, the king locks Antigone in a tomb to die, where she then hangs herself. Antigone's suicide devastates the king's son (who was betrothed to Antigone), and he commits suicide. The king's wife, devastated by the loss of her son, also kills herself. In the end, the king's defiance of divine law (by prohibiting the burial of Polynices) leads directly to the deaths of his most loved ones.

In Mary Shelley's Frankenstein, Dr. Victor Frankenstein is determined to create life—an ability belonging only to nature or the gods. He succeeds in this hubristic ambition and creates a living, intelligent being, but the being has the shape of a monster that so disgusts and terrifies Victor that he abandons it. The monster, in retaliation for this abandonment, resolves to make Victor's life just as lonely as its own, and murders his loved ones. Victor's hubristic aspiration to create life leads to life-shattering consequences when he can't live up to the responsibilities of being a creator, and painfully reaffirms the "natural order" and his position within it as a mortal with limited capabilities.

Hubris in Robert Penn Warren's All the King's Men

In the novel All the King's Men, the Louisiana politician Willie Stark suffers deeply as a result of his own hubris. Willie began as a man from a poor background, entering politics on the local level and positioning himself as a crusader against corruption. As his power grows, he wins the governorship of Louisiana—and, by extension, an opportunity to help the people of his home state whom he truly cares about. But as Willie's ego inflates, his plans grow more ambitious and unyielding, and he begins to break the law in increasingly flagrant, corrupt ways. In the end, Willie succumbs to the very corruption he set out to combat, and his hubris ultimately leads to tragedy.

Hubris Examples in the Bible

Two of the most significant stories in the Bible—the fall of Lucifer, and the fall of Adam and Eve—are examples of hubris. Lucifer, the second most powerful entity in heaven, wants and believes he should be the most powerful and rebels against God. For this act of terrible hubris, Lucifer is punished by getting cast out of heaven. While he is the lord of hell, he also must endure the eternal torment of having lost heaven.

As in literature, hubris is a common trait in film characters—one that makes them complicated and compelling, and leads to their downfall.

In Disney's animated movie Aladdin, the antagonist provides a good example of hubris in a villain. Jafar is the vain and power-hungry advisor to the Sultan of Agrabah, and he wants to claim the throne for himself. His hubris lies in his belief that, using his evil sorcery, he can singlehandedly overthrow the sultan and defeat a hero with an all-powerful genie on his side. But in the final scene, in a reckless bid to win supreme power for himself, Jafar turns himself into a magic genie, without remembering that such ultimate power comes at a cost: genies are magical beings, but they're essentially prisoners bound to servitude. Hubristic villains such as Jafar are often defeated by their own arrogant, power-hungry behavior.

What's the Function of Hubris in Literature?

Hubris appears frequently in literature—in heroes and villains, and in redeemable characters as well as ones fated for demise.

The appearance of hubris in stories can generally be understood to function as a caution against arrogance or pride. While such moralism is more rare in modern literature, it is a common feature of classical mythology, folktales, and even Biblical stories. For instance, in the Russian folktale "Kolobok," a dumpling comes to life and manages to flee his maker's house, then escapes various animals who try to eat him, all while singing a boastful song. In the end, a fox tricks him with flattery: by praising his talent for singing, the fox manages to lower the dumpling's guard, and then eats him. (If this story sounds familiar, it's because it has a lot in common with the tale of the Gingerbread man.) This type of ending is typical of tales warning that ugly downfalls often closely follow overconfidence, boasting, and hubris in general.

At the heart of every good plot is a compelling conflict—and since hubris helps stoke conflict, it can propel a story's plot. Hubristic characters often find themselves in compromising or dangerous situations because of their overconfidence that they'll emerge triumphant, or their overestimation of their own abilities. In the Animaniacs cartoon Pinky and the Brain, for instance, a mouse referred to simply as "The Brain" develops schemes to take over the world each night. The schemes all seem on the verge of succeeding, only to ridiculously fail in a humiliating way. The Brain's hubris helps launch the plot of each episode and, in most cases, lands him in sticky situations along the way, such that often the Brain's efforts are thwarted by his own eagerness for world domination. While Pinky and the Brain is a deeply comic take on hubris, it's still a good example of how hubristic characters can be compelling because it makes them both great and doomed: their hubris leads them to attempt incredible things even as it contains the seeds of its own failure.

Hubris often makes characters more relatable to an audience because, even though it's a major flaw, it adds complexity and depth to characters that might otherwise be seen as "perfect" heroes. It's easier for readers to sympathize with characters who exhibit realistic and relatable flaws. While not every reader may yearn to create intelligent life (as Victor does in Frankenstein) or rise to power as a politician (as Willie does in All the King's Men), readers may relate to the impulse to reach beyond one's limits, or see oneself as exceptional in cases where others would be guaranteed to fail. In some stories, then, hubris kindles a reader's sense of sympathy for a character. 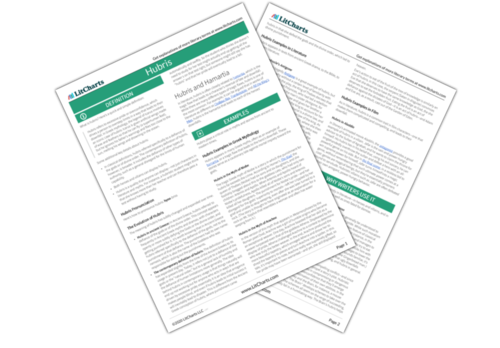