What is foreshadowing? Here’s a quick and simple definition:

Foreshadowing is a literary device in which authors hint at plot developments that don't actually occur until later in the story. Foreshadowing can be achieved directly or indirectly, by making explicit statements or leaving subtle clues about what will happen later in the text. The Russian author Anton Chekhov summarized foreshadowing when he wrote, "If you say in the first chapter that there is a rifle hanging on the wall, in the second or third chapter it absolutely must go off." The description of the gun on the wall, in other words, should foreshadow its later use.

Some additional key details about foreshadowing:

Here's how to pronounce foreshadowing: fore-shad-owe-ing

Foreshadowing can take many different forms. Writers (or characters) may foreshadow later events by explicitly stating what will happen, or by making subtle suggestions about future plot developments. The most common types of foreshadowing are:

Foreshadowing is similar to, and often confused with, the use of "flash-forward." Also known as prolepsis, flash-forwards are a literary device in which a scene set in the future temporarily interrupts the primary, present-day narrative. Foreshadowing and flash-forwards seem to have a lot in common, since they both offer glimpses into the future, but they differ both structurally and in their purpose.

Though foreshadowing can be found in many art forms, it is most prominent in narrative literature and film.

Writers of fiction (and writers of epic poems that tell a story) use foreshadowing to direct their readers' attention to important details, to heighten suspense, and to bring their tales full circle.

In Act 1, Scene 2 of Macbeth, Shakespeare indirectly foreshadows Macbeth's traitorous rise to power when the King Duncan, the King of Scotland, gives Macbeth the new title of Thane of Cawdor after the previous Thane of Cawdor had conspired against the king (and been defeated by Macbeth). When Duncan decides to give the new title to Macbeth he says:

No more that thane of Cawdor shall deceive
Our bosom interest: go pronounce his present death,
And with his former title greet Macbeth.

These lines, spoken by Duncan, the King of Scotland, are highly ironic. Duncan has just rewarded Macbeth's loyalty by giving him a noble title that formerly belonged to the treasonous Cawdor. But Macbeth himself is about to successfully execute a plot to murder Duncan and steal his title as King of Scotland. So Duncan's words are an example of subtle foreshadowing in the sense that they cast Macbeth as the new Cawdor, who also had traitorous intentions toward the King.

In this example from the start of Book One of Paradise Lost, Milton directly foreshadows man's fall from a state of innocence while invoking his poetic muse:

Of man's first disobedience, and the fruit
Of that forbidden tree whose mortal taste
Brought death into the World, and all our woe,
With loss of Eden, till one greater Man
Restore us, and regain the blissful Seat,
Sing, Heavenly Muse, that, on the secret top
Of Oreb, or of Sinai, didst inspire
That Shepherd who first taught the chosen seed
In the beginning how the heavens and earth
Rose out of Chaos: or, if Sion hill
Delight thee more, and Siloa’s brook that flowed
Fast by the oracle of God, I thence
Invoke thy aid to my adventrous song,
That with no middle flight intends to soar
Above the Aonian mount, while it pursues
Things unattempted yet in prose or rhyme.

Here, Milton leaves little doubt about the fate of man. Man's relationship to God, formerly characterized by innocent obedience, is about to be altered for ever: Adam will be banished from the Garden of Eden for eating "the fruit of that forbidden tree." Because Milton's poem expands on the widely-known Biblical story of Adam and Eve, it is not important that he keep his poem's ending secret or only vaguely defined—since most people reading the poem likely already know how the story goes. Rather, Milton foreshadows man's fall from grace in order to establish the poem's solemn tone, signal his seriousness of purpose, and set the focus on how he tells the narrative in his poem (as opposed to what narrative he tells).

Foreshadowing in Of Mice and Men

In John Steinbeck's Of Mice and Men, a character named Candy has a sheepdog that has grown old and sick. In the middle of the novella, another character named Carlson convinces Candy that the dog is suffering and should be put out of its misery. Candy allows Carlson to shoot the dog, but soon after expresses remorse. Candy's remorse isn't that he now thinks it was wrong to shoot the dog, but rather that he should have shot the dog himself.

This moment foreshadows the climax of the book, in which a character named George faces a difficult decision when he finds his friend Lennie's life in his hands: George can allow his friend to be brutally lynched by an angry mob for a murder Lennie committed by accident, or he can quickly kill Lennie himself—and save his friend from greater suffering. When the reader reaches this moment, suddenly the weight of that initial foreshadowing comes into play, and when George comforts and then shoots Lennie, the reader understands exactly why he does it because of the earlier moment with Candy's dog. In this case, the foreshadowing not only hints at what will happen, but also carries forward the emotion, themes, and character motivations at work in that previous scene so that they come crashing down in this later scene.

Filmmakers use foreshadowing to prepare viewers for even the most surprising plot twists, and to redirect viewers' focus to important details of the plot.

Foreshadowing in Edgar Wright's Shaun of the Dead

Edgar Wright's 2004 zombie comedy begins with two friends (Shaun and Ed) fantasizing about the perfect night out while they dine together. By pure coincidence, everything that Ed mentions in his daydream corresponds to an obstacle the pair will face the next day, after the zombie apocalypse has broken out. For example, Ed imagines himself ordering a Bloody Mary, and the next day the two friends find themselves being chased by a zombie wearing a name tag that reads "Mary." Although Ed's ideas for a perfect night foreshadow the entire day, his references to future events are actually indirect. The image below shows Ed's various plans, and the events they indirectly foreshadow:

Horror movies are notorious for their overuse of red herrings to maintain moviegoers' interest. In Wes Craven's Scream, the 1996 slasher classic that revitalized the American horror film genre, the police chief wears the same shoes as the killer. Although it turns out that the officer was not involved in the crime, this red herring diverts both characters' and viewers' attention from the true identity of the killer, heightening the suspense and sustaining the audience's interest.

Why Do Writers Use Foreshadowing?

On the most basic level, writers use foreshadowing to prepare their readers to understand the plot as it unfolds. But it can also: 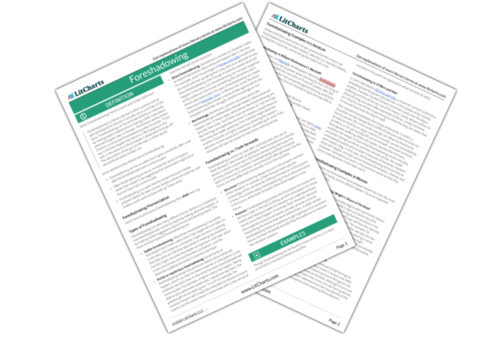