What is formal verse? Here’s a quick and simple definition:

Formal verse is the name given to rhymed poetry that uses a strict meter (a regular pattern of stressed and unstressed syllables). This two-line poem by Emily Dickinson is formal verse because it rhymes and its lines contain the same number of syllables (ten) with the same stress pattern of unstressed and stressed syllables: "In this short Life that only lasts an hour / How much - how little - is within our power."

How to Pronounce Formal Verse

In order to understand formal verse in more depth, it’s helpful to have a strong grasp of a few other literary terms related to poetry. We cover each of these in depth on their own respective pages, but below is a quick overview to help make understanding formal verse easier.

Formal verse makes use of end rhyme, which is the name for rhymes that occur at the ends of lines. End rhymes in formal verse typically repeat according to a pattern called a rhyme scheme. Rhyme schemes are described using letters of the alphabet, so that each line of verse that corresponds to a specific type of rhyme used in the poem is assigned a letter, beginning with "A." For example, a four-line poem in which the first line rhymes with the third, and the second line rhymes with the fourth has the rhyme scheme ABAB, as in the lines below from the poem To Anthea, who may Command him Anything by Robert Herrick:

Although all formal verse poems have some sort of rhyme scheme, certain forms of poetry have a pre-determined rhyme scheme, such as the sonnet or the villanelle. Poets wanting to write such poems have to match the rhyme scheme they use to that defined by the type of poem in question.

Meter Can Vary in Formal Verse

Some poems written in meter use the same metrical pattern throughout the entire poem. Every line of a sonnet, for instance, is written in iambic pentameter. However, it's also perfectly normal for a poem written in formal verse to contain different types of meter or metrical feet within it. This sort of variation can occur in two ways:

Here is a list of some of the most common forms of poetry written in formal verse. Each form has its own specific requirements and conventions (such as a particular rhyme scheme or meter). The LitCharts entry for each form also provides more details about its particular features.

Note also that not all poems written in formal verse have to fit into one of these categories. As long as a poem uses end rhyme consistently and has a consistent metrical pattern, it counts as formal verse.

In the examples that follow, we've bolded the rhyme scheme and highlighted the stressed and unstressed syllables to help you better identify how formal verse is at work in each of the poems.

Theodore Roethke's well-known poem "The Waking" (from 1953) is a villanelle in iambic pentameter. This stanza, an excerpt from the longer poem, has a rhyme scheme of ABAA.

This shaking keeps me steady. I should know.
What falls away is always. And is near.
I wake to sleep, and take my waking slow.
I learn by going where I have to go.

This poem is a good example of a modern poet using formal verse, which is increasingly uncommon.

This is the first stanza of a famous sonnet by Shakespeare. It's written in iambic pentameter (meaning there are ten syllables per line following an "unstressed-stressed" pattern) with an ABAB rhyme scheme.

Shall I compare thee to a summer's day?
Thou art more lovely and more temperate:
Rough winds do shake the darling buds of May,
And summer's lease hath all too short a date...

Dickinson's "Because I could not stop for Death"

This poem by Emily Dickinson is written in a common meter—as were the majority of Dickinson's poems— so it alternates between iambic tetrameter and iambic trimeter (that is, lines of eight syllables and six syllables). The poem follows an ABCB rhyme scheme.

Dr. Seuss's Horton Hears a Who!

Dr. Seuss wrote many of his children's books in anapestic tetrameter, a form of meter in which each line has four feet called anapests, with each anapest consisting of two unstressed syllables followed by a stressed syllable—as in the word "Un-der-stand". Here, the beginning of Horton Hears a Who! gives a clear example of the form in an AABB rhyme scheme. This is an example of a use of formal verse that doesn't follow the conventions of any particular form or type of poem, such as the sonnet or villanelle.

Notice how, to add variation to the rhythm, Seuss shifted the beginning of the fourth line so that it begins with an iamb rather than an anapest.

Why Do Writers Use Formal Verse?

To understand why writing in formal verse is such a strong and influential tradition in poetry, it helps to understand the uses of meter and rhyme more generally. Metered verse has its origins in ancient Greek and Roman epic poetry. These long poems (such as Homer’s Iliad and Odyssey, and Virgil’s Aeneid) were typically spoken aloud in group settings, often with some form of musical accompaniment. Writing the words with a uniform rhythm made it easier not only to recite the long poems alongside music, but also to commit the words to memory. In ancient Greece and Rome, literacy was uncommon and poetry existed primarily as an oral tradition, so being able to memorize verses was very important to the survival of storytelling. The later practice of applying different rhyme schemes to verses made the task of memorizing them for recital even easier. Together, meter and rhyme continue to be a useful tool for memorization, which is why writers of nursery rhymes, children's books, and songs have continued to write in formal verse, even as it has fallen out of popularity with many contemporary poets.

Generally speaking, as literacy levels have risen over time, meter and rhyme have become less a commonly-used tool for memorization and more a way of elevating the tone of poetry and making it aesthetically beautiful so as to distinguish it from everyday language. Today, poets might choose to write a poem in formal verse for such aesthetic reasons, or to place their work directly in dialogue with a historic and rich poetic tradition—in which case the poet may choose to use a fixed form of poetry, such as the sonnet or the limerick. 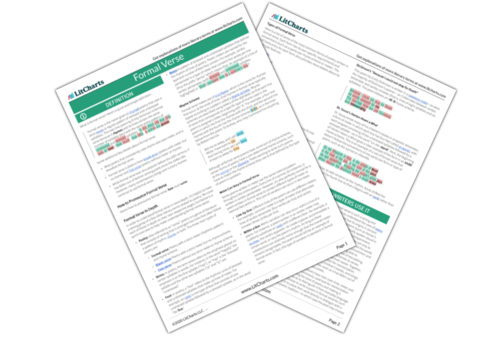