What is understatement? Here’s a quick and simple definition:

Understatement is a figure of speech in which something is expressed less strongly than would be expected, or in which something is presented as being smaller, worse, or lesser than it really is. Typically, understatement is used to call attention to the very quality it pretends to downplay. For instance, if you had just eaten the most delicious meal of your life and licked the plate clean, you might jokingly tell the chef that "It was edible," making use of understatement to humorously express how much you appreciated the meal.

Some additional key details about understatement:

How to Pronounce Understatement

Here's how to pronounce understatement: un-der-state-ment

Something is ironic when it concerns the gap between how something appears and how it really is. Most of the time when people refer to understatement, they're referring to ironic understatement, which just means that the speaker is using understatement to say one thing with the intention of actually communicating something quite different. For example, when British Airways flight 9 lost all four of its engines, the captain made the following announcement, which has since come to be regarded as a masterpiece of understatement:

Ladies and gentlemen, this is your captain speaking. We have a small problem. All four engines have stopped. We are doing our damnedest to get them going again. I trust you are not in too much distress.

This example is ironic because there's a gap between what the captain says and what he obviously means—which is not simply that there is a "small problem" which should not cause the passengers "too much distress," but that everyone's lives are in danger and their distress is presumably overwhelming. Although the humor of his understatement was probably lost on his panicking passengers, understatement that's intended to be comedic (or, as in this case, provide comic relief) is almost always ironic.

Non-ironic understatement is pretty easy to understand. It occurs when somebody expresses something less strongly than would be expected, but not with the intention of communicating any alternative meaning. This type of understatement is often used when people are trying to be humble or polite. For instance:

Nobody in the examples above is being ironic; they're simply making an understatement with the intention of downplaying the seriousness or degree of something. They're not trying to be funny or convey any other meaning with what they say. This non-ironic form of understatement often overlaps with the use of euphemism (i.e., mild, indirect, or gentle words substituted for other words that are considered to be too embarrassing, unpleasant, offensive, or harsh to actually say). For example, calling someone's views "controversial" is often just a euphemistic way of saying that their opinions are insulting or backwards.

Understatement is often confused with another figure of speech called anticlimax. (In fact, this mistake is even made by many other websites in their coverage of understatement. So this confusion is something to watch out for.)

While these two devices might be thought of as similar because they both involve a reversal of expectations, in all other respects they are quite different. In understatement, the actual meaning of the statement is different from its literal meaning, while in anticlimax, expectations are built up over the course of a sentence or successive sentences, but expectations are reversed at the very end by a relatively disappointing ending. For example, Woody Allen once wrote:

"I have taken to violent choking and fainting. My room is damp and I have perpetual chills and palpitations of the heart. I have noticed, too, that I am out of napkins."

This is an example of anticlimax, not understatement. The inclusion of napkins is a letdown of the expectations built up by Allen's comments about his health, but it isn't in any way an understatement.

Litotes is a specific type of understatement in which an idea or sentiment is expressed ironically by negating a statement to the contrary. For example:

Litotes works by making its use of understatement obvious. It usually does this by negating a statement that is either extreme or involves words that are superlative, such as "best" or "most." For example:

How do you tell the difference between litotes and other forms of understatement?

Understatement appears all over the place. The examples below are taken from literature, film, and history. In each case, the use of understatement is highlighted in green.

There's a subtle example of understatement at the very end of this otherwise highly dramatic monologue from Hamlet, in which Hamlet bemoans the fact that his mother has remarried his uncle so soon after his father's death.

Let me not think on ’t. Frailty, thy name is woman!—
A little month, or ere those shoes were old
With which she followed my poor father’s body,
Like Niobe, all tears. Why she, even she—
O God, a beast that wants discourse of reason
Would have mourned longer!—married with my uncle,
My father’s brother, but no more like my father
Than I to Hercules. Within a month,
Ere yet the salt of most unrighteous tears
Had left the flushing in her gallèd eyes,
She married. O most wicked speed, to post
With such dexterity to incestuous sheets!
It is not nor it cannot come to good,
But break, my heart, for I must hold my tongue.

By this point in his speech, Hamlet has made it perfectly clear that the situation is far worse than "not good;" he sees it as a complete and utter disaster. Maybe Shakespeare inserted this understatement to make Hamlet's expression of dismay seem a little less melodramatic at just the right moment: when you hear this passage read aloud by a great actor, the understatement is by far the monologue's most impactful line.

The Great Gatsby tells the story of Jay Gatsby, a wealthy man who throws extravagant parties at his waterfront mansion in order to attract the attention and affection of Daisy, the woman he loves. But Daisy is married to Tom Buchanan, who is equally as fabulously wealthy. In this passage, Tom uses understatement as he shows the novel's narrator around his house.

“I’ve got a nice place here,” he said, his eyes flashing about restlessly.

Turning me around by one arm, he moved a broad flat hand along the front vista, including in its sweep a sunken Italian garden, a half acre of deep, pungent roses, and a snub-nosed motor-boat that bumped the tide offshore.

Even the narrator's brief description of Tom's opulent property makes it clear that he can see right through Tom's half-hearted attempt at modesty. It's unclear whether Tom meant the remark ironically or not, which fits with the book's overall portrayal of him as a total jerk.

Understatement in E.E. Cummings's "Since Feeling is First"

This poem by E.E. Cummings uses understatement in its final line to make a convincing argument for living in the moment.

since feeling is first
who pays any attention
to the syntax of things
will never wholly kiss you;
wholly to be a fool
while Spring is in the world

my blood approves
and kisses are a better fate
than wisdom
lady i swear by all flowers. Don't cry
—the best gesture of my brain is less than
your eyelids' flutter which says

we are for each other: then
laugh, leaning back in my arms
for life's not a paragraph

and death i think is no parenthesis

The meaning of Cummings's understatement is clear: not only is death not a parenthesis (by which he presumably means something like a momentary pause or digression) but—to follow through on his metaphor—it's a "full stop," a period, "end of telegram." Therefore, Cummings suggests, let's enjoy this moment together, while we're alive! It's worth noting, too, that this use of understatement has two layers (since it's metaphorical): not only is death more like a period than a parenthesis, but even comparing death to a punctuation mark could itself be interpreted as a form of understatement.

Understatement in Monty Python and the Holy Grail

In one particularly famous scene from the classic film Monty Python and the Holy Grail, King Arthur encounters a knight as he is traveling through the countryside, and the knight challenges him to a duel. The knight quickly proves an easy opponent. First, King Arthur lops off one of the knight's arms, but much to Arthur's surprise, the knight continues fighting, barely seeming to notice. When Arthur points out the the knight's arm is gone, the knight plays it off as nothing: "Tis but a scratch," the knight says. Moments later, when the knight loses his other arm to Arthur's sword, he tells his competitor that it's "just a flesh wound," and that he has "had worse." The scene reaches the height of absurdity when Arthur has finally cut off all the knight's limbs, and the knight, too proud to admit defeat, says "All right, we'll call it a draw." Each of the knight's remarks is an example of understatement. It's ironic because the humor of the understatement comes from the gap between what the knight says and what is actually the case.

Understatement by Watson and Crick

When the scientists James Watson and Francis Crick discovered DNA in the 1950s, they famously reported:

This structure has novel features which are of considerable biological interest.

In retrospect, their statement reads as a profound understatement—as no single discovery has had a greater impact on the field of biology than theirs—but they probably didn't write it with the intention of being ironic, just humble.

Why Do Writers Use Understatement?

A writer might use understatement for a number of different reasons:

It's more common for writers to have their characters use overt understatement than it is for them to incorporate understatement directly into their own narration, since usually the point is to make a joke, or to show that a character is being modest or polite. Narrators, by contrast, usually aim to be factual—and "factual" is something which understatement is decidedly not. Generally speaking, whether or not an understatement is made ironically, it often has the effect of calling attention to the very thing it seeks to downplay. 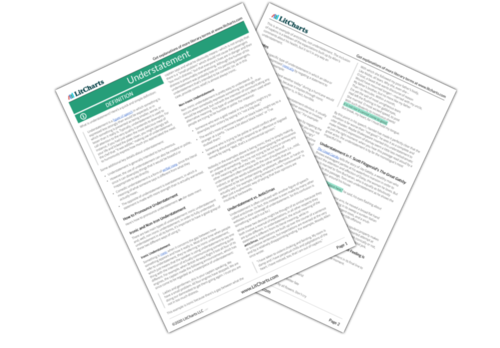