What is a pun? Here’s a quick and simple definition:

A pun is a figure of speech that plays with words that have multiple meanings, or that plays with words that sound similar but mean different things. The comic novelist Douglas Adams uses both types of pun when he writes: "You can tune a guitar, but you can't tuna fish. Unless of course, you play bass." In the first sentence, Adams puns on the similar sounds of "tune a" and "tuna," while in the second he puns on the two meanings of the word "bass"—the musical instrument, and the fish.

Some additional key details about puns:

Here's how to pronounce pun: puhn

There are three main types of puns. All of them are based on words or phrases that either have multiple meanings or that sound similar:

Many websites on the internet also refer to compound puns, but these sites aren't always particularly clear about what that term means. In fact, the term often seems to refer to two separate things:

Put another way: the definition for compound puns is really not settled, but it's enough to know that the term can refer to either of these two things.

Puns are sometimes confused with double entendres and malapropisms, two other figures of speech.

Puns often appear in short quips or jokes, but also commonly appear in all sorts of literature, from poems to plays to novels.

Example of a Pun in Alice's Adventures in Wonderland

Lewis Carroll's novel Alice's Adventures in Wonderland is full of all sorts of wordplay, including puns. In the example below, Carroll makes a homophonic pun on the words "lesson" and "lessen."

“And how many hours a day did you do lessons?” asked Alice, in a hurry to change the subject.
“Ten hours the first day,” said the Mock Turtle: “nine the next, and so on.”
“What a curious plan!” exclaimed Alice.
“That’s the reason they’re called lessons,” the gryphon remarked: “because they lessen from day to day.”

Example of a Pun in Hamlet

In the beginning of Shakespeare's play Hamlet, the main character Hamlet is upset at the death of his father and what he considered to be the too-hasty remarriage of his mother Gertrude to his uncle Claudius. In Act 1, Scene 2, Claudius asks Hamlet why he's so gloomy by using a metaphor of about "clouds" hanging on him:

CLAUDIUS
How is it that the clouds still hang on you?

Hamlet uses the phrase "in the sun" to deny that he's gloomy, directly refuting Claudius's use of "clouds." However, at the same time, Hamlet is making a homophonic pun on "sun"/"son" to refer to the fact that Hamlet is actually upset that Claudius's marriage to Gertrude has made Hamlet his step-son. This example shows a way that puns can operate in a way that is not merely humorous. Here Hamlet uses a pun to hint at a meaning he can't say outright. The pun allows him to land a punch at Claudius without even obviously throwing one.

Example of a Pun in George Carlin's Comedy

The comedian George Carlin could toss off the occasional excellent pun. For instance, he once described atheism like this:

Atheism is a non-prophet institution.

Here Carlin makes a homophonic pun on the words "profit" and "prophet" in order to play with the meaning of the common phrase "non-profit institution."

Example of a Pun in The Importance of Being Earnest

The title of Oscar Wilde's The Importance of Being Earnest is a triple pun: not only is it a homophonic pun on the name "Ernest" and the word "earnest," but it's also a homonymic pun (and an example of double entendre) because "earnest" was a Victorian slang word meaning "homosexual." The play itself is also full of puns. Here's one the character Algernon makes about his piano playing:

As far as the piano is concerned, sentiment is my forte.

This pun operates in a variety of ways. First, it uses the primary meaning of "forte" as strength, and so Algernon is dismissing his not very good technical skill by saying that his real strength lies in the feelings behind his playing. But the word "forte" also refers to a kind of marking in musical notation, and it also refers to the actual name of the instrument itself (pianos were originally called pianoforte). So here Algernon is making a triple pun on a single word.

It's also worth thinking about the fact that there are so many puns in The Importance of Being Earnest. This is a play in which many of the characters are pretending to be people who they are not. All the puns, then, with their double and even triple meanings, thematically fits with the characters and their double lives.

Example of a Pun in Romeo and Juliet

This is another pun from a Shakespeare play, which is fitting because Shakespeare used a lot of puns in his plays. In this example from Romeo and Juliet, Mercutio (who is always playing with language in a way that makes him seem both hyper-smart and cynical—and on the verge of a nervous breakdown) puns homonymically on the word "grave" even as he knows he is about to die from a wound he has received from Tybalt. Referring to his wound, he says:

No, ’tis not so deep as a well nor so wide as a church-door, but ’tis enough, ’twill serve. Ask for me tomorrow, and you shall find me a grave man.

Here Tybalt plays with two meanings of "grave," implying that the next day he will be "serious" as well as literally in the grave. In this pun, he captures both how death will rob him of his wry humor and also how it will put him in the ground.

Why Do Writers Use Puns?

When most people think of puns, they think of groan-inducing jokes. But writers use puns for a variety of reasons: 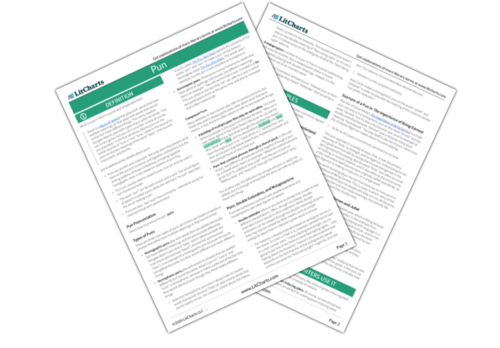