What is an idiom? Here’s a quick and simple definition:

An idiom is a phrase that conveys a figurative meaning that is difficult or impossible to understand based solely on a literal interpretation of the words in the phrase. For example, saying that something is "beyond the pale" is an idiomatic way of saying that it is improper or "over the line," but you would only know that if someone had explained it to you, or if you had been able to infer its meaning based on context.

Some additional key details about idioms:

How to Pronounce Idiom

Here's how to pronounce idiom: ih-dee-um

Idioms are groups of words that only make sense when they are interpreted figuratively rather than literally. For example, if you were waiting in line at the DMV to renew your driver's license and suddenly realized you'd forgotten to bring all the right documents, you might complain about all the "red tape" preventing people from renewing your license. But if the person standing in line next to you had never heard this idiom and interpreted your words literally, they would probably be confused, because they wouldn't see any red tape anywhere. However, someone who knows the idiom would understand that by "red tape" you simply mean "unnecessary bureaucratic regulations." Similarly, if someone were to say, "I can't believe I have to jump through all of these hoops to get my license," they wouldn't literally mean that the DMV requires them to jump through hoops—they're simply complaining that they need to fulfill so many different requirements in order to get their license.

Where Idioms Come From

The majority of idioms originated as phrases with literal meanings, and only later came to have a figurative and more widely-known meaning. "Red tape" is one such idiom: in England, the government used to use red ribbon to bind packets of legal documents together, so red tape came to be associated with bureaucracy and legal regulations. But the phrase continued to be used long after legal documents ceased to be tied with red ribbon, and today "red tape" is an idiom that is used exclusively as a figurative expression.

Idioms are said to be "set phrases," meaning that they only make sense if you use them exactly. For instance, if instead of using the term "red tape" when complaining about all the bureaucracy at the DMV you instead complained about all of the "crimson ribbon," no one would have any idea what you're talking about. Idioms are almost set phrases, in that they only make sense when they aren't modified.

Idioms are related to and sometimes confused with two other literary terms: colloquialisms and euphemisms.

Colloquialisms are informal words or phrases in writing or speech that only make sense to people of a particular community. Such communities are usually defined in geographical terms, meaning that colloquialisms are often delineated by their use within a dialect, a regionally-defined variant of a larger language. Colloquialisms differ from idioms in two ways:

Euphemisms are mild, indirect, or gentle words or phrases substituted for other words or phrases that are considered to be too embarrassing, unpleasant, offensive, or harsh to use in formal settings or in polite conversation. When we say that someone "passed away" instead of saying that they died, we are using a phrase that is both an idiom and a euphemism: the phrase is a figurative way of saying in an unoffensive way that someone died.

However, not all idioms are euphemisms, because not all idioms are designed to avoid having to state something uncomfortable directly. Similarly, not all euphemisms are idioms, because not all euphemisms are "set phrases," as an idiom must be. For example, when it was discovered in 2013 that former director of national intelligence, James Clapper, had lied to the US Senate, Clapper explained that he had responded in "the least untruthful manner" possible. Because it is not a widely used set phrase with a figurative meaning, "the least untruthful manner" is not an idiom, but it is a euphemism because it is meant to soften the uncomfortable reality of Clapper's lie.

Examples of Idioms in Everyday Speech

Idioms are such a central part of ordinary speech that people often use them without thinking about the fact that they're employing a form of figurative language.

Examples of Idioms in Literature

Much Ado About Nothing by William Shakespeare

In Much Ado About Nothing, the character Antonio says of his brother Leonato:

If he could right himself with quarreling,
some of us would lie low.

In this scene, Antonio muses that, if his brother could fight, his enemies would do well to hide from him—implying that they'd surely be defeated. The idiom "to lie low," which means to hide oneself or to remain hidden in order to avoid notice, was already in common usage when Shakespeare wrote Much Ado About Nothing (though Shakespeare is known not only for using many idioms, but for coining (or inventing) original figurative expressions that over time have become widely used idioms.)

The Adventures of Tom Sawyer by Mark Twain

In the opening chapter The Adventures of Tom Sawyer, Tom, the novel's protagonist and title character, plays a trick on his Aunt Polly. Uncertain if she should laugh or reprimand him, she says:

Can't learn an old dog new tricks, as the saying is. But my goodness, he never plays them alike, two days, and how is a body to know what's coming? He 'pears to know just how long he can torment me before I get my dander up, and he knows if he can make out to put me off for a minute or make me laugh, it's all down again and I can't hit him a lick.

This passage is full of idioms. To "get one's dander up" is an idiom meaning to arouse one's anger; and "to put someone off" is to delay, discourage, or dissuade them. Aunt Polly uses these two idioms together to express that Tom always teases her just enough to momentarily anger her before making her laugh and persuading her to forgive him. Twain is known for using idioms and colloquial language in his writing, and this passage is an excellent example of how writers can use idioms in dialogue to give their characters distinct, lifelike voices.

As I Lay Dying by William Faulkner

In As I Lay Dying, Addie Bundren's husband, Anse, announces that after Addie dies, the family will have to take her body to be buried in Jefferson. Even though the trip will be a difficult one, he says they must go because:

Her mind is set on it.

The idiom "to have one's mind set on something" means to be determined to do something, or to be determined that something will happen. As I Lay Dying is narrated by 15 different characters, and Faulkner gives each of them their own distinctive voice. One of the ways he does this is by having characters speak using idioms and colloquial language.

Everything I Never Told You by Celeste Ng

In this passage in Everything I Never Told You, the character Marilyn thinks about her mother, Doris Walker, who is a home economics teacher:

Newcomers to the school district assumed Mrs. Walker was a widow. Her mother herself never mentioned it. She still powdered her nose after cooking and before eating she still put on lipstick before coming downstairs to make breakfast. So they called it keeping house for a reason, Marilyn thought. Sometimes it did run away.

Here, Marilyn contemplates the idiom "keeping house," which means to take care of a household by cooking, cleaning, and so on. Marilyn's observation that "sometimes [houses] did run away" rests on her literal interpretation of the word "keep," which implies that one could lose a house if they don't "keep" it.

Examples of Idioms in Pop Music

Idiom in "We Are Never Getting Back Together" by Taylor Swift

In the song "We Are Never Getting Back Together," Taylor Swift uses two idioms to describe her decision to end a romantic relationship:

When Swift sings that she and her partner "called it off," she employs an idiom that means to cancel something—and in this case, the thing that they are canceling is their relationship. When she says, "We are never getting back together," she is using another idiom: to get together can either mean to begin dating, or alternatively it can be a euphemistic idiom for being physically intimate with someone.

Why Do Writers Use Idioms?

Writers use idioms for many of the same reasons people use idioms in everyday speech: these pithy, "set phrases" of figurative language convey ideas in a neat and easily recognizable way. Often, people use idioms without thinking much about it (for many, it's just as natural to say that they'll "give it a shot" as it is to say they'll try something, and simpler to say that they're "getting in the holiday spirit" than it is to say that they're in the mood to participate in seasonal festivities). Here are some of the other reasons a writer might choose to use an idiom rather than saying something without the use of figurative language:

Writers, of course, have linguistic habits just like everyone else, and they sometimes use an idiom simply because it feels like the best or most natural way to communicate an idea. 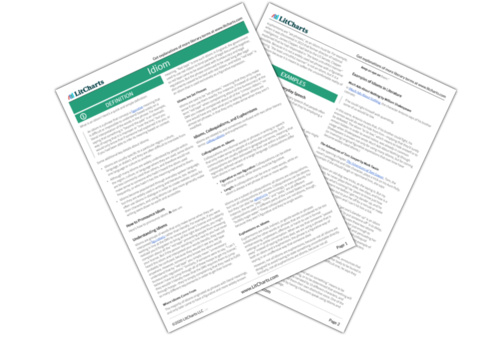