What is hyperbole? Here’s a quick and simple definition:

Hyperbole is a figure of speech in which a writer or speaker exaggerates for the sake of emphasis. Hyperbolic statements are usually quite obvious exaggerations intended to emphasize a point, rather than be taken literally. For example, in the hyperbolic statement, "My backpack weighs a ton," the speaker doesn't actually think the backpack weighs a ton, nor does he or she intend the listener to think so. The backpack-wearer simply wants to communicate, through the use of hyperbole, that he or she is carrying a very heavy load.

Some additional key details about hyperbole:

How to Pronounce Hyperbole

Here's how to pronounce hyperbole: hi-per-buh-lee

It can be hard to tell the difference between hyperbole and simile. A simile is a figure of speech that compares two unlike things in order to make a description more vivid and interesting. Simile, further, is defined by the use of the words "like" or "as," which the writer uses to establish the comparison that he or she wants to make. An example of a simile is:

When Lee Mellon finished the apple he smacked his lips together like a pair of cymbals.

At first, the sentence seems like a simile because:

However, Brautigan's comparison also exaggerates the noise of Mellon's smacking lips by comparing it to the clash of cymbals. No matter how bad Mellon's table manners were, it would be impossible for him to achieve the volume of a pair of cymbals clashing with his lips, so isn't this also a hyperbole?

There is a simmering debate as to whether a figure of speech can be considered both hyperbole and simile simultaneously. With this particular example, you could make two arguments.

Some grammar experts (and teachers) might ask you to decide on one definition: simile or hyperbole. However, it seems more important to understand the distinction between hyperbole and simile:

That way, if you think a figure of speech is hyperbole and simile simultaneously, you can explain why it's both.

Kurt Vonnegut frequently uses hyperbole in his novels, for both dramatic and comedic effect. In this example from Slaughterhouse-Five, Billy Pilgrim emerges from an underground slaughterhouse where he has been held prisoner by the Germans during the deadly World War II firebombing of Dresden:

There was a fire-storm out there. Dresden was one big flame. The one flame ate everything organic, everything that would burn.

It wasn't safe to come out of the shelter until noon the next day. When the Americans and their guards did come out, the sky was black with smoke. The sun was an angry little pinhead. Dresden was like the moon now, nothing but minerals. The stones were hot. Everybody else in the neighborhood was dead.

Vonnegut's hyperbolic language, particularly his description of Dresden as "one big flame," helps him convey the enormous devastation left by the bombs. So too does his statement that, "the sky was black with smoke." While smoke from the bombs probably darkened the sky, it's improbable that the sky was completely black with smoke—Vonnegut exaggerates to emphasize the extent of the damage, to capture what the damage felt like.

In Cat's Cradle, Vonnegut uses hyperbole to describe his character Felix Hoenikker, a fictional scientist who helped invent the atomic bomb. As in Slaughterhouse Five, hyperbole allows Vonnegut to write about violence on an enormous scale, and to describe the twisted genius who invented the bomb with vividness and emotion. In the following example, the novel's narrator talks with Dr. Hoenniker's former research supervisor in search of clues to Hoenniker's personality:

"I understand you were Dr. Hoenikker's supervisor during most of his professional life," I said to Dr. Breed on the telephone.
"On paper," he said.
"I don't understand," I said.
"If I actually supervised Felix," he said, "then I'm ready now to take charge of volcanoes, the tides, and the migrations of birds and lemmings. The man was a force of nature no mortal could possibly control."

Of course, Dr. Breed isn't actually willing to take charge of volcanoes, tides, and other natural phenomena. He's comparing Felix Hoenikker to these forces of nature to show that Hoenniker is one of them: brilliant, self-contained and impossible to control.

Elizabeth Bennet, the most free-spirited character in Pride and Prejudice, refuses Mr. Darcy's marriage proposal with a string of hyperbole:

From the very beginning, from the first moment I may almost say, of my acquaintance with you, your manners impressing me with the fullest belief of your arrogance, your conceit, and your selfish disdain of the feelings of others, were such as to form that ground-work of disapprobation, on which succeeding events have built so immoveable a dislike; and I had not known you a month before I felt that you were the last man in the world whom I could ever be prevailed on to marry.

Elizabeth's closing statement, that Darcy is the "last man in the world" whom she would ever marry, is an obvious hyperbole. It's hard to believe that Elizabeth would rather marry, say, an axe murderer or a diseased pirate than Mr. Darcy. Even beyond the obvious exaggeration, Austen's use of hyperbole in this exchange hints at the fact that Elizabeth's feelings for Darcy are more complicated than she admits, even to herself. Austen drops various hints throughout the beginning of the novel that Elizabeth feels something beyond mere dislike for Darcy. Taken together with these hints, Elizabeth's hyperbolic statements seem designed to convince not only Darcy, but also herself, that their relationship has no future.

Hyperbole in Harper Lee's To Kill a Mockingbird

The story of To Kill a Mockingbird takes place during the Great Depression in Maycomb County, Georgia: a sleepy town where nothing much ever happens:

People moved slowly then. They ambled across the square, shuffled in and out of the stores around it, took their time about everything. A day was twenty-four hours long but seemed longer. There was no hurry, for there was nowhere to go, nothing to buy and no money to buy it with, nothing to see outside the boundaries of Maycomb County.

Lee's use of hyperbole to describe the town—nothing to buy, no money to buy it, nowhere to go—links the difficult economic situation to the townspeople's pace of life, as well as to the insular, isolated nature of this community.

When described in hyperbolic terms, people and things can seem larger-than-life. For this reason, politicians who want to project a sense of confidence regarding a particular issue, or stir up sentiments for or against something—whether it's a candidate, an opponent, or an idea— often use hyperbole.

In his remarks at a dinner celebrating the 1962 Nobel Prize winners, JFK paid them the following hyperbolic compliment:

I want to tell you how welcome you are to the White House. I think this is the most extraordinary collection of talent, of human knowledge, that has ever been gathered together at the White House, with the possible exception of when Thomas Jefferson dined alone.

In stating that all the prize winners' brilliance put together would not match Thomas Jefferson's genius, Kennedy wants to convey his great esteem for Jefferson as well as the prize winners, rather than set up a literal comparison or "battle of the brains."

In his speech at the inauguration, Donald Trump used hyperbole to describe the severity of the nation's problems, and to emphasize his compassion for those suffering under their impact:

But for too many of our citizens, a different reality exists: Mothers and children trapped in poverty in our inner cities; rusted-out factories scattered like tombstones across the landscape of our nation; an education system flush with cash, but which leaves our young and beautiful students deprived of knowledge; and the crime and gangs and drugs that have stolen too many lives and robbed our country of so much unrealized potential.

We are one nation—and their pain is our pain. Their dreams are our dreams; and their success will be our success. We share one heart, one home, and one glorious destiny.

When he calls America's most pressing social issues "carnage," Trump isn't implying that we're living through a literal "massacre." Instead, he's using hyperbole to communicate the severe economic circumstances in certain communities. Similarly, "their dreams are our dreams," and "we share one heart," are both examples of hyperbole that Trump uses to express compassion.

Trump has used hyperbole throughout his career, fully aware of its rhetorical power. In his book The Art of Deal, cowritten by Tony Schwartz, Trump describes how he uses this figure of speech strategically:

“The final key to the way I promote is bravado. I play to people’s fantasies. People may not always think big themselves, but they can still get very excited by those who do. That’s why a little hyperbole never hurts. People want to believe that something is the biggest and the greatest and the most spectacular. I call it truthful hyperbole. It’s an innocent form of exaggeration—and a very effective form of promotion.”

Why Do Writers Use Hyperbole?

Hyperbole has been used since the days of ancient Greece, and its use has been criticized for just as long. Aristotle himself pronounced hyperbole worthy of use only by "angry" and "undisciplined" people. Around the year A.D. 95, though, the Roman rhetorician Quintilian wrote the following eloquent defense of hyperbole:

Hyperbole lies, but not so as to intend to deceive by lying. . . . It is in common use, as much among the unlearned as among the learned; because there is in all men a natural propensity to magnify or extenuate what comes before them, and no one is contented with the exact truth. But such departure from the truth is pardoned, because we do not affirm what is false. In a word, the hyperbole is a beauty, when the thing itself, of which we have to speak, is in its nature extraordinary; for we are then allowed to say a little more than the truth, because the exact truth cannot be said; and language is more efficient when it goes beyond reality than when it stops short of it.

Writers and people in general exaggerate accounts of their experiences in an effort to communicate. Hyperbole gives them an opportunity to compensate for the fact that true, lived experiences often can't be satisfactorily reproduced in spoken or written language. Quintilian's defense of this figure of speech is quite profound—he argues that hyperbole isn't intended to deceive, or to express an exaggerated form of the truth, but instead to stand in for truths that are inexpressible. 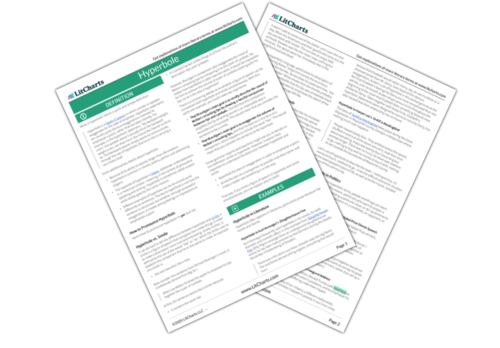