What is common meter? Here’s a quick and simple definition:

Common meter is a specific type of meter that is often used in lyric poetry. Common meter has two key traits: it alternates between lines of eight syllables and lines of six syllables, and it always follows an iambic stress pattern in which each unstressed syllable is followed by one stressed syllable. The hymn "Amazing Grace" is an example of common meter: "Amazing grace, how sweet the sound / That saved a wretch like me."

In order to understand common meter in more depth, it’s helpful to have a grasp of a few other literary terms related to poetry. We cover each of these in depth on their own respective pages, but below is a quick overview to help make understanding common meter easier.

The basic unit of common meter is the iamb, a metrical foot made up of one unstressed and one stressed syllable. Common meter alternates lines of eight syllables and six syllables, meaning that it alternates lines of iambic tetrameter (a line that contains four iambs) and a line of iambic trimeter (a line that contains three iambs). Here's an example of common meter in a poem by Emily Dickinson, who wrote many of her poems according to this metrical pattern. We've marked the unstressed and stressed syllables that make up each iamb:

I've heard it in the chillest land -
And on the strangest Sea -
Yet - never - in Extremity,
It asked a crumb - of me.

Common meter may or may not rhyme. When it does rhyme, it usually follows a particular pattern or rhyme scheme. The two most common rhyme schemes used with common meter are ABAB and ABCB. The poem below, "To Anthea, who may Command him Anything" by Robert Herrick, is in common meter and uses an ABAB rhyme scheme.

Common meter is found in poetry ranging from folk ballads to the work of Emily Dickinson. While it's less common in contemporary poetry, it is regularly found in television show theme songs.

Common Meter in Dickinson's "Because I could not stop for Death"

This poem by Emily Dickinson is written in common verse—as were the majority of Dickinson's poems. This poem addresses the subject of time by telling the story of taking a ride on Death's horse-drawn carriage, a somber subject matter—and one that the iamb's heartbeat-like rhythm is well-suited to. The rhyme scheme in this poem is ABCB.

O I forbid you, maidens all,
That wear gold in your hair,
To come or go by Carterhaugh,
For young Tam Lin is there.

Common Meter in Robert Hayden's "The Ballad of Nat Turner"

Here's a stanza from a more modern (and therefore rarer) example of a common verse poem. The poem slips in and out of strict common meter, but generally adheres to the 8-syllable 6-syllable rule. The poem doesn't use rhyme.

And came at length to livid trees
where Ibo warriors
hung shadowless, turning in wind
that moaned like Africa,

Notice that in the third line, a trochee (that is, a foot with a "stressed-unstressed" pattern) is substituted for an iamb to accommodate the word "turning."

Common Meter in Coleridge's "The Rime of the Ancient Mariner"

Samuel Taylor Coleridge's long lyrical ballad "The Rime of the Ancient Mariner" employs many different types of meter, but the poem frequently uses common meter, as in the stanzas below. Notice, though, that in the first stanza, the first and third lines are short one syllable: both lines begin in the middle of an iamb, so to speak. This doesn't mean that the stanzas aren't good examples of common meter, it just means they contain metric variations.

The very deep did rot – Oh Christ!
That ever this should be.
Yea, slimy things did crawl with legs,
Upon the slimy sea.

Common Meter in Wordsworth's "She Dwelt among the Untrodden Ways"

Wordsworth wrote many of his poems in common meter, including this one, from a series called the Lucy poems. The poem uses and ABAB rhyme scheme, though "one" and "stone" are what's called an eye rhyme: they are spelled the same, so they look like they rhyme, but the words don't actually have the same sound.

A violet by a mossy stone
Half hidden from the eye!
—Fair as a star, when only one
Is shining in the sky.

Notice that the word "real" in the third line has to be broken up into two syllables (pronounced something like "ree-ull") in order for the meter to remain consistent. This type of variation is especially common in songwriting, when words can easily be drawn out over more syllables than they would usually have to better suit the phrasing of the song's melody.

What's the Function of Common Meter in Literature?

Only one form of poetry actually requires the use of common meter, and that's the ballad. For all other writers who choose to use common meter, they might select it for one of these reasons:

All in all, these qualities make common meter an appealing choice for songs, ditties, ballads—or any other lighthearted poem, and especially one that might be recited aloud. Common meter is not, by contrast, particularly well-suited to very serious or heavy subject matters, since the singsongy cadence doesn't sound very somber. 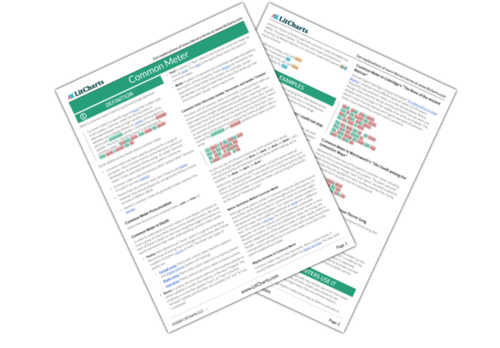