What is anadiplosis? Here’s a quick and simple definition:

Anadiplosis is a figure of speech in which a word or group of words located at the end of one clause or sentence is repeated at or near the beginning of the following clause or sentence. This line from the novelist Henry James is an example of anadiplosis: "Our doubt is our passion, and our passion is our task."

Some additional key details about anadiplosis:

A Closer Look at Anadiplosis

It's helpful to look at examples of anadiplosis in more detail to understand the specific details about how it does (and doesn't) work.

Anadiplosis Can Repeat a Single Word or Multiple Words

Anadiplosis can involve a single repeated word, or the repetition of a group of words. Both of these sentences, for example, employ anadiplosis:

Repeated Words Don't Have to be Adjacent

Anadiplosis can include words that aren't immediately next to each other. Take these lines from Romeo and Juliet:

It is the east, and Juliet is the sun.
Arise, fair sun, and kill the envious moon...

Here, the second sentence's "sun" doesn't immediately follow the preceding "sun." Nonetheless, it appears near the beginning of the second sentence, and there is still a sense of repetition of the word "sun." So this is an example of anadiplosis.

Anadiplosis Can Take Place in Different Clauses or Different Sentences

Anadiplosis isn't determined by punctuation, and therefore can appear within different clauses of a single sentence or across two or more sentences. Both of the examples below contain anadiplosis:

Anadiplosis Often Appears in a String of Related Ideas

The repetition involved in anadiplosis makes it a handy tool for building a sequence of related ideas, each one leading to the next, across either a string of clauses or sentences. In the below quote, Malcolm X uses anadiplosis to argue for a process of personal growth, beginning with philosophy and mounting to action.

When anadiplosis extends across at least three clauses, it can also be called by the name gradatio.

Anadiplosis is related to another figure of speech called antimetabole. In antimetabole, the words of the first clause of a sentence are reversed in the next clause. The use of antimetabole frequently results in punchy maxims, such as:

The way that antimetabole creates a mirroring effect between its two clauses also means that it creates a repetition of words within those clauses. As a result, all instances of antimetabole also contain anadiplosis:

However, not all anadiplosis involves antimetabole. For instance, anadiplosis occurs in both of the following two sentences:

But antimetabole only occurs in the first sentence, because only in that one do the clauses mirror each other.

Once you start to recognize anadiplosis, you'll see it everywhere, from movies to the Bible. The repetition created by anadiplosis has the power to persuade, to evoke emotion, to present a logical progression or sequence of steps, and to please the ear through rhythm. Kids love it in nursery rhymes, and adults respond to it in political speeches. Anadiplosis is common in everyday writing and speech, too.

In both poetry and prose, anadiplosis can signal the importance of a word or concept and create beautiful musicality in the text.

Anadiplosis in Jamaica Kincaid's "Those Words that Echo...Echo...Echo Through Life"

In Jamaica Kincaid's personal essay about her dead father, the repetition of her father's name, Mr. Potter, emphasizes the emotional space he occupies in her life. Through its repetition, anadiplosis can put focus on a writer's—or, in fiction, a character's—fixations, thereby signaling key themes. In this case, the signaled theme is coping with death by using art to reincarnate the lost loved.

I come back and look at Mr. Potter.

"Mr. Potter," I write, and I put clothes on him, even though I do not see him naked, for he was my father, and just now he is not yet dead.

It's worth noting that, here, anadiplosis takes place over a paragraph break.

In Lolita, the morally bankrupt Humbert Humbert defends his relationship to the young Lolita to an imagined jury. Here, he reveals that what he presented as another person's letter was actually written by him, ostensibly from memory.

A tactic of his deceit involves convincing the jury of the improbable—that is, that he remembers a letter verbatim—and his use of anadiplosis as a persuasion tool reflects both his charming and incredibly slimy personality.

Anadiplosis in Shakespeare's Romeo and Juliet

In an address to her father in Act 4, Scene 2 of Romeo and Juliet, Juliet uses anadiplosis to plea for forgiveness for her disobedience. In this case, the plea is actually an act, part of her scheme to flee with Romeo, but anadiplosis makes her begging all the more dramatic and convincing.

...[I] am enjoined
By holy Lawrence to fall prostrate here.
I beg your pardon.
Pardon, I beseech you!

Anadiplosis in William Butler Yeats' "The Lake Isle of Innisfree"

In Yeats' iconic poem about longing for nature's tranquility, anadiplosis contributes both to the poem's pleasant, lilting rhythm, and to the dreamy effect of yearning for a place faraway.

I will arise and go now, and go to Innisfree...
And I will have some peace there, for peace comes dropping slow.

Repetition provides a predictability that is both comforting and delightful for children. In addition, repetition makes retention and memorization easier. It makes sense, then, that anadiplosis is common in children's books, songs, and nursery rhymes.

This grade school song uses anadiplosis to teach, in sequence, the connection between different joints in the body.

Anadiplosis in Beatrix Potter's "The Tale of Squirrel Nutkin"

In this storybook, the red squirrel sings a menacing riddle repeating the words "Hitty Pitty" (the squirrel's nickname for stinging nettles). Here, anadiplosis both has a playful effect and stresses the fearsomeness of Hitty Pitty.

Politicians love using anadiplosis in speeches, as do other orators, public figures, attorneys—anyone trying to evoke a certain response from their audience. The emphasis from repetition can be powerfully persuasive.

Below, Steve Jobs uses anadiplosis to underscore how poorly a Microsoft product performed. Even to a listener unaware of what "two percent market share" means, the repetition implies it's dismal.

Jesse Jackson's speech uses anadiplosis to argue for the link between suffering and faith. While he doesn't explain why suffering breeds character or character breeds faith, the anadiplosis suggests an unspoken logical reasoning. Plus, it makes potentially complex logic easy to follow.

Suffering breeds character; character breeds faith; in the end faith will not disappoint.

Anadiplosis Examples in the Bible

This Bible verse uses anadiplosis to show the way suffering can lead people to hope.

The following verse is typical of the iconic style, often involving anadiplosis, found in the Bible.

In the beginning God created the heaven and the earth. And the earth was without form, and void.

Why Do Writers Use Anadiplosis?

Writers, from speechwriters to poets, use anadiplosis for its stylistic power to persuade, to beautify words through rhythm and cadence, and sometimes to give prose a more natural sound, closer to the way we speak.

Anadiplosis is a Killer Tool in Persuasion

Check out Jesse Jackson's original quote, then the same quote with the anadiplosis removed:

The second sentence reads as clunky and too "which"-heavy. Anadiplosis makes such claims at once more coherent, easier to grasp, and more powerful and authoritative through forceful repetition.

Because repetition is essential to musicality, anadiplosis can lend a sentence a lyrical effect. Take Edgar Allen Poe's "The Raven":

While I nodded, nearly napping, suddenly there came a tapping,
As of some one gently rapping, rapping at my chamber door.

Without that second "rapping," the poem's famous cadence would be thrown off kilter.

When we speak, we tend to repeat words. Anadiplosis can therefore give a more natural, less rigid effect to the written word, and make it feel more like normal speech. In Jamaica Kincaid's essay "Those Words that Echo...Echo...Echo Through Life," anadiplosis creates the sense that she's speaking aloud to the reader, or perhaps working through her own memory:

"And then that one day, that one day after Mr. Potter's life advanced and exploded on the page, I had to have my lunch..." 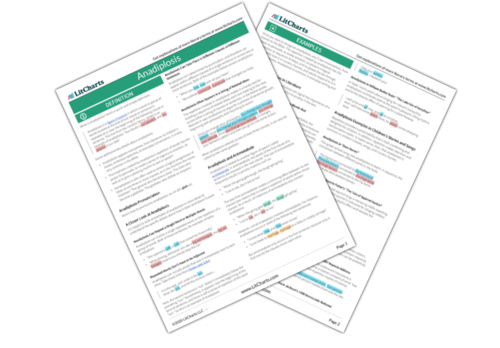