What is narrative? Here’s a quick and simple definition:

Some additional key details about narrative:

How to Pronounce Narrative

Here's how to pronounce narrative: nar-uh-tiv

Narrative vs. Story vs. Plot

In everyday speech, people often use the terms "narrative," "story," and "plot" interchangeably. However, when speaking more technically about literature these terms are not in fact identical.

In order to fully understand narrative, it's important to keep in mind that most sequences of events can be recounted in many different ways. Each different account is a separate narrative. When deciding how to relay a set of facts or describe a sequence of events, a writer must ask themselves, among other things:

Narrative elements are the tools writers use to craft narratives. A great way to approach analyzing a narrative is to break it down into its different narrative elements, and then examine how the writer employs each one. The following is a summary of the main elements that a writer might use to build his or her narrative.

Narrative as an Adjective

It's worth noting that the word "narrative" is also frequently used as an adjective to describe something that tells a story.

Narrative in The Book Thief by Markus Zusak

Zusak's novel, The Book Thief, is narrated by the figure of Death, who tells the story of Liesel, a girl growing up in Nazi Germany who loves books and befriends a Jewish man her family is hiding in their home. In the novel's prologue, Death says of Liesel:

Yes, often, I am reminded of her, and in one of my vast array of pockets, I have kept her story to retell. It is one of the small legion I carry, each one extraordinary in its own right. Each one an attempt—an immense leap of an attempt—to prove to me that you, and your human existence, are worth it.

Narrators do not always announce themselves, but Death introduces himself and explains that he sees himself as a storyteller and a repository of the stories of human lives. Choosing Death (rather than Leisel) as the novel's narrator allows Zusak to use Liesel's story to reflect on the power of stories and storytelling more generally.

Narrative in A Visit From the Goon Squad  by Jennifer Egan

In A Visit From the Good Squad, Egan structures the narrative of her novel in an unconventional way: each chapter stands as a self-contained story, but as a whole, the individual episodes are interconnected in such a way that all the stories form a single cohesive narrative. For example, in Chapter 2, "The Gold Cure," we meet the character Bennie, a middle-aged music producer, and his assistant Sasha:

"It's incredible," Sasha said, "how there's just nothing there."
Astounded, Bennie turned to her…Sasha was looking downtown, and he followed her eyes to the empty space where the Twin Towers had been.

Because there is an empty space where the Twin Towers had been, the reader knows that this dialogue is taking place some time after the September 11th, 2001 attack in which the World Trade Center was destroyed. Bennie appears again later in the novel, in Chapter 6, "X's and O's," which is set ten years prior to "The Gold Cure." "X's and O's" is narrated by Bennie's old friend, Scotty, who goes to visit Bennie at his office in Manhattan:

I looked down at the city. Its extravagance felt wasteful, like gushing oil or some other precious thing Bennie was hoarding for himself, using it up so no one else could get any. I thought: If I had a view like this to look down on every day, I would have the energy and inspiration to conquer the world. The trouble is, when you most need such a view, no one gives it to you.

Just as Sasha did in Chapter 2, Scotty stands with Bennie and looks out over Manhattan, and in both passages, there is a sense that Bennie fails to notice, appreciate, or find meaning in the view. But the reader wouldn't have the same experience if the story had been told in chronological order.

Narrative in Atonement by Ian McEwan

Ian McEwan's novel Atonement tells the story of Briony, a writer who, as a girl, sees something she doesn't understand and, based on this faulty understanding, makes a choice that ruins the lives of Celia, her sister, and Robbie, the man her sister loves. The first part of the novel appears to be told from the perspective of a third-person omniscient narrator; but once we reach the end of the book, we realize that we've read Briony's novel, which she has written as an act of atonement for her terrible mistake. Near the end of Atonement, Briony tells us:

I like to think that it isn’t weakness or evasion, but a final act of kindness, a stand against oblivion and despair, to let my lovers live and to unite them at the end. I gave them happiness, but I was not so self-serving as to let them forgive me. Not quite, not yet. If I had the power to conjure them at my birthday celebration…Robbie and Cecilia, still alive, sitting side by side in the library…

In Briony's novel, Celia and Robbie are eventually able to live together, and Briony visits them in an attempt to apologize; but in real life, we learn, Celia and Robbie died during World War II before they could see one another again, and before Briony could reconcile with them. By inviting the reader to imagine a happy ending, Briony effectively heightens the tragedy of the events that actually occurred. By choosing Briony as his narrator, and by framing the novel Briony wrote with her discussion of her own novel, McEwan is able to create multiple interlacing narratives, telling and retelling what happened and what might have been.

Narrative in Slaughterhouse-Five by Kurt Vonnegut

Kurt Vonnegut’s novel Slaughterhouse-Five tells the story of Billy Pilgrim, a World War II veteran who survived the bombing of Dresden, and has since “come unstuck in time.” The novel uses flashbacks and flash-forwards, and is narrated by an unreliable narrator who implies to the reader that the narrative he is telling may not be entirely true:

All this happened, more or less. The war parts, anyway, are pretty much true. One guy I knew really was shot in Dresden for taking a teapot that wasn’t his. Another guy I knew really did threaten to have his personal enemies killed by hired gunmen after the war. And so on. I’ve changed all the names.

The narrator’s equivocation in this passage suggests that even though the story he is telling may not be entirely factually accurate, he has attempted to create a narrative that captures important truths about the war and the bombing of Dresden. Or, maybe he just doesn’t remember all of the details of the events he is describing. In any case, the inconsistencies in dates and details in Slaughterhouse-Five give the reader the impression that crafting a single cohesive narrative out of the horrific experience of war may be too difficult a task—which in turn says something about the toll war takes on those who live through it.

What's the Function of Narrative in Literature?

When we use the word "narrative," we're pointing out that who tells a story and how that person tells the story influence how the reader understands the story's meaning. The question of what purpose narratives serve in literature is inseparable from the question of why people tell stories in general, and why writers use different narrative elements to shape their stories into compelling narratives. Narratives make it possible for writers to capture some of the nuances and complexities of human experience in the retelling of a sequence of events.

In literature and in life, narratives are everywhere, which is part of why they can be very challenging to discuss and analyze. Narrative reminds us that stories do not only exist; they are also made by someone, often for very specific reasons. And when you analyze narrative in literature, you take the time to ask yourself why a work of literature has been constructed in a certain way. 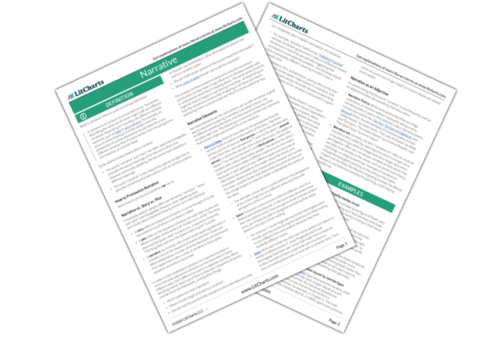