What is an epigram? Here’s a quick and simple definition:

An epigram is a short and witty statement, usually written in verse, that conveys a single thought or observation. Epigrams typically end with a punchline or a satirical twist.

Some additional key details about epigrams:

How to Pronounce Epigram

Here's how to pronounce epigram: ehp-ih-gram

A poem is called an epigram if it is short (usually no longer than six lines) and it makes a witty observation. Here are some key defining features of epigrams:

Epigrams as Witty Statements Within Poetry and Prose

Another literary term commonly confused with epigram is "epigraph," which makes sense—not only do the words sound similar, but sometimes an epigraph can be an epigram, too. Here's a quick overview of epigraphs:

Epigraphs are sometimes—but not always—also epigrams. In To Kill a Mockingbird, Harper Lee uses an epigraph that may also be considered an epigram: "Lawyers, I suppose, were children once." This quote (from an essay by the 18th century English writer Charles Lamb) is an epigram because it is a brief, witty, and satirical statement which, even without the original context, makes sense all on its own.

An example of an epigraph that is not also an epigram is the epigraph of Ernest Hemingway's book, The Sun Also Rises, which quotes Gertrude Stein's influential remark about Hemingway and his peers, "You are all a lost generation." Like many epigraphs, the epigraph of The Sun Also Rises is a short and revealing statement, but would not be considered an epigram, since Stein's quotation is not particularly witty, humorous, or satirical. It's an earnest observation about a group of people.

Examples of Epigrams as Stand-Alone Poems

The examples below are all short, self-contained poems.

Martial was an ancient Roman poet and a famous writer of epigrams. He popularized the form and provided the model on which modern epigrams are based. This epigram, like nearly all of the epigrams he wrote, takes as its subject a public figure. In this case, the public figure is named Acerra. Martial originally wrote his epigrams in metered verse. The English translation loses that meter, though it captures the humor:

Whoever believes it is of yesterday's wine that Acerra smells, is mistaken: Acerra always drinks till morning.

Sir, I admit your general rule,
That every poet is a fool,
But you yourself may serve to show it,
That every fool is not a poet.

Gut eats all day and lechers all the night;
So all his meat he tasteth over twice;
And, striving so to double his delight,
He makes himself a thoroughfare of vice.
Thus in his belly can he change a sin:
Lust it comes out, that gluttony went in.

You think it horrible that lust and rage
Should dance attendance upon my old age;
They were not such a plague when I was young;
What else have I to spur me into song?

Emily Dickinson's "These Strangers, in a foreign World"

These Strangers, in a foreign World,
Protection asked of me―
Befriend them, lest Yourself in Heaven
Be found a Refugee.

Epigrams as Witty Statements in Other Forms

The examples below are not stand-alone poems, but can be considered epigrams because they contain short, witty stanzas or sentences that work by themselves.

Lord Alfred Tennyson's famous poem "In Memoriam A.H.H." is best known for the two lines excerpted below. As these are often quoted without the surrounding text, the lines are a good example of an epigram inside of a larger work.

Blake's poem "Auguries of Innocence" contains many couplets and quatrains with pithy observations, such as the concluding stanza excerpted below. Although it's part of a much longer poem, some people would consider this stanza to be epigrammatic.

God appears, and God is light,
To those poor souls who dwell in night;
But does a human form display
To those who dwell in realms of day.

Oscar Wilde was famous for his quotable witticisms. The following statements are not written in verse, and are referred to as aphorisms just as often as they are referred to as epigrams, which highlights the difficulty of defining and identifying epigrams that are not self-contained poems. Even so, they can be considered epigrams.

Mark Twain understood the logic and the instinctive appeal of epigrams better than anyone; he wrote hundreds of pithy statements in his life and is still renowned for his wit.

Why Do Writers Choose to Write Epigrams?

Epigrams are used to convey pithy, humorous observations in a succinct and memorable style. As such, writers often use epigrams to show off their wit and sense of humor—qualities that have earned epigrammatic writers, such as Oscar Wilde and J.V. Cunningham, notoriety and respect. The shortness of the epigram and its tendency to employ rhyme and punchlines also serve a mnemonic function, making poems written in this form incredibly easy to remember.

Epigrams that are not stand-alone poems—epigrams, that is, that are part of a longer text—may be used to add dimension to the text by injecting elements of humor or wit. These epigrams, even more so than stand-alone poems, tend to be quoted far and wide—in advertisements, in film and television, and, most of all, in everyday conversation. In this sense, non-poetic epigrams may be said to function more as folk proverbs or aphorisms than as literature. 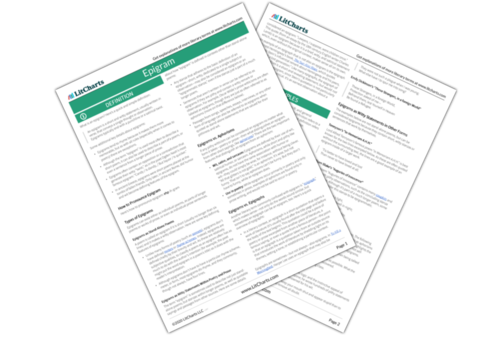