What is zeugma? Here’s a quick and simple definition:

A zeugma is a figure of speech in which one "governing" word or phrase modifies two distinct parts of a sentence. Often, the governing word will mean something different when applied to each part, as in the sentence, "He took his coat and his vacation." The verb "to take" makes sense with and governs both "coat" and "vacation," but is appropriate to each in a different way.

Some additional key details about zeugma:

Here's how to pronounce zeugma: zoog-muh

Zeugma can be complicated to understand because it's a flexible term, and many sentence constructions that seem quite different from one another can all qualify as zeugma. Understanding how all the different types and examples of zeugma relate to one another makes it easier to grasp the overall concept.

The first step to understanding zeugma is addressing its relationship with syllepsis. Some people use zeugma and syllepsis as synonyms for each other, but many others believe there is a slight but real difference between the two.

Here is the Oxford English Dictionary's definition of zeugma:

A figure of speech in which a word applies to two others in different senses (e.g., John and his license expired last week) or to two others of which it semantically suits only one (e.g., with weeping eyes and hearts)

Here is the Oxford English Dictionary's definition of syllepsis:

A figure of speech in which a word is applied to two others in different senses (e.g., caught the train and a bad cold) or to two others of which it grammatically suits only one (e.g., neither they nor it is working)

You'll notice that the definitions differ in just one place—semantically/grammatically—and many people argue that this is what sets zeugma and syllepsis apart. To put that difference simply:

If this seems like too much hairsplitting, here is some good news: not even grammar experts agree on the definition of zeugma versus syllepsis, and it is much easier to understand the concept of zeugma if we do as Bryan A. Garner suggests in his book Garner's Modern American Usage:

Although commentators have historically tried to distinguish between zeugma and syllepsis, the distinctions have been confusing and contradictory...We're better off using zeugma in its broadest sense and not confusing matters by introducing syllepsis, a little-known term whose meaning not even the experts agree on.

In other words, he suggests seeing zeugma as covering both semantics and grammatical scenarios.

Zeugma comes from the ancient greek for "a yoking," because this figure of speech literally "yokes" or joins two separate parts of a sentence. However, just like two yoked oxen, the two animals don't immediately fall into step with one another. This is also the case in language: zeugma's don't work seamlessly, and it's actually that tiny disconnect between the two "yoked" pieces of language that creates the pleasing comedic or dramatic effect of the zeugma.

So far, we have looked at two different examples of zeugma with two different types of "yokes": "He took his hat and his vacation," and "He works night, I days." It so happens that these two examples represent the two main types of zeugma.

The first type of zeugma, which play with meaning, is both more "fun" and appear more commonly used than the second type.

Zeugma is also sometimes classified in yet another way. Above, we discussed the difference between grammar-driven and meaning-driven zeugma. True zeugma-enthusiasts also like to categorize zeugma based on where the governing word or "yoke" appears in the sentence. Luckily, we already have examples for the first two categories:

One final type of zeugma to know is diazeugma: this is a zeugma in which a single subject governs multiple subsequent verbs. For example, "Müller receives the ball, dribbles, dodges the defender, shoots, and scores!"

Because of how often diazeugma appears in sportscasting, you can think of this as the "play-by-play" zeugma.

In all of the examples below, we highlight the governing word or phrase in green, and the parts of the sentence being governed in red.

Zeugma are versatile. They can be humorous, they can create a sense of drama, and they can make an idea or phrase stick in the mind. For all of these reasons, Zeugma are very common in both poetry and prose.

In this example from Chapter 43 of Pride and Prejudice, Eliza Bennet and Mr. Darcy awkwardly attempt to talk.

She wanted to talk, but there seemed to be an embargo on every subject. At last she recollected that she had been traveling, and they talked of Matlock and Dove Dale with great perseverance. Yet time and her aunt moved slowly—and her patience and her ideas were nearly worn our before the tete-a-tete was over.

Austen's use of zeugma here is not only clever and comic, but also brings up a recurring theme in Darcy and Eliza's relationship: her lack of "connections" and lower social status in comparison to him. Even as the two walk and talk, on their way towards a better understanding of one another, her relatives hold the pair back both literally and figuratively.

Zeugma in Mark Twain's The Adventures of Tom Sawyer

This memorable zeugma from Chapter 1 of The Adventures of Tom Sawyer sets the tone for the rest of the novel, in that it yokes (or ties together) misbehavior and the experience of "glory":

The new boy took two broad coppers out of his pocket and held them out with derision. Tom struck them to the ground. In an instant both boys were rolling and tumbling in the dirt, gripped together like cats; and for the space of a minute they tugged and tore at each other's hair and clothes, punched and scratched each other's nose, and covered themselves with dust and glory.

You'll notice that "dust" comes before "glory," just as in the previous example, the man "takes his hat" before he "takes his vacation." In the type of zeugma that hinges on meaning (rather than grammar), the more literal or concrete meaning of the verb usually comes before the more abstract meaning.

Zeugma in Tim O'Brien's The Things they Carried

In this example from Chapter 1 of The Things They Carried, O'Brien uses zeugma to describe the combined load—both physical and emotional—that soldiers in the Vietnam war carried:

But Ted Lavender, who was scared, carried 34 rounds when he was shot and killed outside Than Khe, and he went down under an exceptional burden, more than 20 pounds of ammunition, plus the flak jacket and hemet and rations and water and toilet paper and tranquilizers and all the rest, plus the unweighed fear.

By listing such seemingly different things as the jacket, the rations, and the fear as part of the "burden" Lavender carried (burden is also the governing word of the zeugma), O'Brien implies that all these weights, both material and immaterial, are equally important to understanding the soldier's experience.

Tennyson includes a grammatical zeugma at the end of the second stanza of his poem "Ulysses."

This is my son, mine own Telemachus,
To whom I leave the sceptre and the isle,—
Well-loved of me, discerning to fulfil
This labour, by slow prudence to make mild
A rugged people, and thro' soft degrees
Subdue them to the useful and the good.
Most blameless is he, centred in the sphere
Of common duties, decent not to fail
In offices of tenderness, and pay
Meet adoration to my household gods,
When I am gone. He works his work, I mine.

Zeugma can do more than simply drive home a point in a memorable way. They're so pithy that they make the speaker come off as sharp and spontaneous, especially when spoken aloud. In other words, zeugma make great "zingers" and are perfect for the big screen.

Zeugma in "The Lion King"

Scar drops the following zeugma when describing his plot to bring down his brother and put himself in power:

"Yes, my teeth and ambitions are bared."

Zeugma in "The West Wing"

In Season 1, Episode 19 of "The West Wing," the character C.J. discusses plans for an easter egg hunt at the White House:

"The theme of the Egg Hunt is 'learning is delightful and delicious'—as, by the way, am I."

Zeugma in "Our Song" by Taylor Swift

Zeugma in "Beast of Burden" by the Rolling Stones

Why Do Writers Use Zeugma?

Cleverly crafted zeugma can cause the literary equivalent of a "double-take." When the governing word is applied to the two or more modified words in a novel way, it makes the reader pause—maybe because he or she is unsure of having read the sentence correctly, or wants to linger over a skillful play with language. This ability to create a pause or breathing-space within a text makes zeugma a powerful tool in poetry, which often aspires to slow down and draw out the reader's experience. Zeugma also tend to change the rhythm and structure of a sentence, and can be used to turn an awkward construction into a musical one (as in, "He works nights, and I days"). 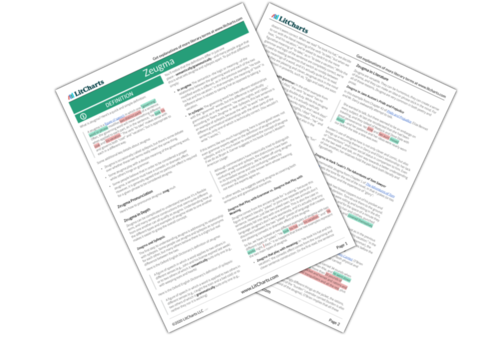