What is meter? Here’s a quick and simple definition:

Meter is a regular pattern of stressed and unstressed syllables that defines the rhythm of some poetry. These stress patterns are defined in groupings, called feet, of two or three syllables. A pattern of unstressed-stressed, for instance, is a foot called an iamb. The type and number of repeating feet in each line of poetry define that line's meter. For example, iambic pentameter is a type of meter that contains five iambs per line (thus the prefix “penta,” which means five).

Some additional key details about meter:

How to Pronounce Meter

Here's how to pronounce meter: mee-ter

The most common feet found in metered poetry are:

The most common number of feet found in lines of poetry are:

The name of a meter is based on the foot it uses (stated as an adjective, with an "–ic" at the end), and the number of feet in the line. So a line with four dactyls would be "dactylic tetrameter." Note that the total number of syllables can be different even for lines that have the same number of feet, because some feet have two syllables while others have three. A line of iambic pentameter has 10 syllables, because it has five iambs, each of which have two syllables. Dactylic pentameter has 15 syllables, because it has five dactyls, each of which has three syllables.

While there are many combinations of possible meters (trochaic dimeter, anapestic hexameter) that can be written, some are more common than others. Meters that often appear in poetry are:

Poems are written using many other sorts of meters as well, of course, but the two above are the most common.

Many poems include meter, but not all do. In fact, poetry can be broken down into three types, based on whether it includes meter and rhyme. The three main types of poetry are:

Although some poems written in meter use the same metrical pattern throughout the entire poem, it's also normal for a poem written in formal or blank verse to contain different types of meter or metrical feet within it. The Common meter described just above, for instance, alternates lines of iambic tetrameter (four iambs per line) and iambic trimeter (three iambs per line).

Metric variation can also occur within a line of a poem. For instance, a poem written in an iambic meter may suddenly substitute an iamb with a different foot—for example, a trochee, the iamb's opposite—to create a pause, accommodate a certain word, or vary the poem's rhythm. This kind of substitution does not change the overall categorization of a poem's meter. In other words, meter is flexible—a poem written in iambic pentameter with occasional trochees interspersed is still said to be in iambic pentameter, since that is the poem's predominant meter.

Not all poems that use meter have an overall metrical form such as "iambic pentameter." Some writers make up their own metrical forms, combining different feet to make a pattern of their own design, or interspersing meter at irregular intervals throughout a poem that doesn't follow any strict metrical conventions. Although poems such as these can be said to use meter, they would not be said to have a meter (or a metrical form), since what's usually meant by saying that a poem has a meter is that it follows a predetermined metrical pattern, such as common meter, or iambic pentameter, or even something less common like dactylic hexameter.

Meter in Accentual vs Quantitative Verse

The stress patterns that form the basis of meter are measured differently depending on the language in which a poem is written. In some languages meter is accentual, while in others it is quantitative.

The examples below show diverse uses of meter in poetry. Some of these poems have a meter and follow it strictly, while others have a meter but deviate from it by making use of metric variation in particular lines. Some of these poems make use of metrical feet but don't adhere to an overarching meter, and still others are written in free verse but make use of meter just to add emphasis and musical effect in certain places. In each example, we’ve highlighted the stressed syllables in red and the unstressed syllables in green.

Meter in Roethke's "The Waking"

Theodore Roethke's well-known poem "The Waking" (from 1953) is a villanelle in iambic pentameter. It is a good example of the strict use of meter, as every foot is an iamb. This poem is also a good example of a modern poet using a traditional meter. Note that this poem also follows a rhyme scheme, in which the first, third, and fourth lines all rhyme. The excerpt below is a single stanza from the longer poem.

This shaking keeps me steady. I should know.
What falls away is always. And is near.
I wake to sleep, and take my waking slow.
I learn by going where I have to go.

Meter in Shakespeare's Romeo and Juliet

Shakespeare used iambic pentameter throughout many of his plays, including Romeo and Juliet. Shakespeare usually wrote his plays in blank verse, meaning that the plays employ meter but don't have a rhyme scheme.

If I profane with my unworthiest hand
This holy shrine, the gentle fine is this:
My lips, two blushing pilgrims, ready stand
To smooth that rough touch with a tender kiss.

Notice how Shakespeare's use of iambic pentameter is not strict throughout this passage, deviating from the prescribed pattern of five iambs per line in lines 4 and 5. In line 4, the second foot ("two blush") is a spondee (stressed-stressed) rather than the unstressed-stressed of an iamb, while in line 5 the third foot ("touch with") is a trochee rather than an iamb.

Meter in Dickinson's "'Hope' is the thing with feathers"

The majority of Emily Dickinson's poems, this one included, are written in common meter, a pattern that alternates between iambic tetrameter and iambic trimeter.

I've heard it in the chillest land -
And on the strangest Sea -
Yet - never - in Extremity,
It asked a crumb - of me.

Common meter is also the metrical pattern of the famous song "Amazing Grace," as well as many other well-known songs and hymns. As a result, most of Dickinson's poems can be sung using the "Amazing Grace" melody.

Meter in Whitman's “When Lilacs Last in the Dooryard Bloom’d”

Walt Whitman is best known for helping to pioneer free verse poetry, but his free verse often included occasional metered lines. Here he uses a near-perfect line of dactylic hexameter seemingly out of the blue—the lines before and after this example are not dactylic at all.

The choppy, arhythmic meter of John Masefield's poem "Sea Fever" is a strong example of a poet matching a poem's form to its content (using an irregular rhythm to evoke seasickness), as well as an example of multiple types of metrical feet being used within the same poem. The two lines shown here are an excerpt from the longer poem.

I must go down to the seas again, to the lonely sea and the sky
And all I ask is a tall ship and a star to steer her by...

Why Do Writers Use Meter?

To understand why metered verse is such a strong and influential tradition, it helps to begin by looking at its origins in ancient Greek and Roman epic poetry. These long poems (such as Homer’s Iliad and Odyssey, and Virgil’s Aeneid) were typically spoken aloud in group settings, often with some form of musical accompaniment. Writing the words with a uniform rhythm made it easier not only to recite the long poems alongside music, but also to commit the words to memory. This was a time when literacy was uncommon and poetry existed primarily as an oral tradition, so being able to memorize verses was very important to the survival of storytelling. The later practice of applying different rhyme schemes to verses made the task of memorizing them for recital even easier. Meter continues to be a useful tool for memorization, which is why writers of nursery rhymes, children's books, and songs have continued to employ meter, even as it has fallen out of popularity with many contemporary poets.

Generally speaking, as literacy levels have risen over time, meter has become less a tool for memorization and more a way of elevating the tone of poetry and making it aesthetically beautiful so as to distinguish it from everyday language. The mark of a highly skilled writer of metrical verse is that they are able to use meter to create a rhythm that matches the content of what they're writing—perhaps using a light and upbeat foot (like the anapest) to write a love poem, a foot with a heavy and plaintive tone (like the trochee) to write a poem about death, or some elaborate mix of the two to write a poem about insanity. By selecting a meter that matches the content of a poem, the poet has a degree of control and precision in guiding a readers' experience of the work that is simply not attainable in free verse or prose. 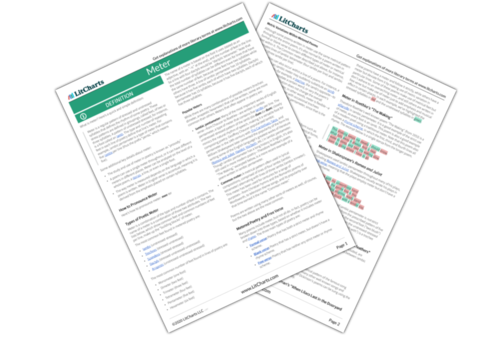