What is enjambment? Here’s a quick and simple definition:

Enjambment is the continuation of a sentence or clause across a line break. For example, the poet John Donne uses enjambment in his poem "The Good-Morrow" when he continues the opening sentence across the line break between the first and second lines: "I wonder, by my troth, what thou and I / Did, till we loved? Were we not weaned till then?"

Some additional key details about enjambment:

How to Pronounce Enjambment

Here's how to pronounce enjambment: en-jam-ment

How to Tell If a Line is Enjambed

Sometimes, whether or not lines of poetry are enjambed or end-stopped will be obvious because the punctuation (or lack of punctuation) will make it obvious. But punctuation is not always a good guide to enjambment: it's better to judge whether a line is enjambed by its syntax.

For instance, take these lines from Romeo and Juliet, where the second and fifth line are end-stopped, and lines one, three, and four are third are enjambed:

When he shall die,
Take him and cut him out in little stars,
And he will make the face of heaven so fine
That all the world will be in love with night
And pay no worship to the garish sun.

However, in some poems it may be difficult to tell whether a line is enjambed based only on punctuation. Many poets use punctuation in idiosyncratic ways (or not at all). More important, punctuation only inconsistently indicates the end of a phrase or sentence. In the first line quoted from Romeo and Juliet, for example, the comma at the end of the line divides two parts of a sentence. Even though there's a punctuation mark, the first line doesn't make sense without the line that follows it, which makes it enjambed. For those reasons, a reader must pay attention to the phrasing of the poem: how the poet uses line breaks and punctuation to push the poem forward or to create pauses. Take a look at the following excerpt from a poem by Emily Dickinson, who is known for her unusual use of punctuation.

Because I could not stop for Death—
He kindly stopped for me—
The Carriage held but just Ourselves—
And Immortality.

The first three lines of the stanza end, somewhat weirdly, with a dash. So, are they all end-stopped? In this case, it may be helpful to look more carefully at the sentences (rather than the punctuation) and ask where the pauses occur.

The first two lines, re-written with proper punctuation, would read: "Because I could not stop for Death, he kindly stopped for me." Each line of the poem could be thought of as containing a part of a larger sentence. The first line contains part of the sentence, and the second completes it. In this case, the first line is enjambed: the phrase is incomplete without the following line. The second line, however, is end-stopped: it completes the phrase.

The third and fourth lines when re-written with standard punctuation, might read: "The carriage held but just ourselves and immortality." So, is the third line enjambed? The answer is that it's open to interpretation. It's true that line 4 doesn't make sense without line 3—but line 3 does make sense on its own. Here Dickinson is playing with the way readers experience end-stop. As line 3 ends, readers think they're at the end of Dickinson's thought and they prepare to encounter something new. Instead, she surprises readers by adding a line that changes the meaning of the line before it. Enjambment is often a matter of emphasis and interpretation, rather than an objective feature of a poem, and line 3 is an example of this. The poem poses an implicit question in lines 3 and 4 about the relationship between "Ourselves" and "Immortality." If a reader thinks that Dickinson wants to emphasize the interrelationships between "Ourselves" and "Immortality," that reader might describe the line break between lines 3 and 4 as an enjambment. Doing so would make the sentence that contains them one complete thought, which links the two together. If a reader thinks that Dickinson wants to emphasize the difference between the two, that reader might describe the line break as an end-stop, emphasizing the way that Dickinson divides the two spatially, and possibly grammatically.

Four of the first eight lines of this sonnet by Shakespeare are enjambed.

Let me not to the marriage of true minds
Admit impediments. Love is not love
That alters when it alteration finds
Or bends with the remover to remove:
O no! It is an ever-fixed mark
That looks on tempests and is never shaken;
It is the star to every wandering bark,
Whose worth's unknown, although his height be taken.

I can hear little clicks inside my dream.
Night drips its silver tap
down the back.
At 4 A.M. I wake. Thinking

of the man who
left in September.
His name was Law.

In this poem by ee cummings, whose poems were known for their eccentric punctuation, a majority of the lines are enjambed, a few are end-stopped, and some lines are open to interpretation. The excerpt below is of the first two stanzas of the poem.

i carry your heart with me(i carry it in
my heart)i am never without it(anywhere
i go you go,my dear;and whatever is done
by only me is your doing,my darling)
i fear
no fate(for you are my fate,my sweet)i want
no world(for beautiful you are my world,my true)
and it’s you are whatever a moon has always meant
and whatever a sun will always sing is you

Because cummings' punctuation is uneven and idiosyncratic, one should read his poem with an eye toward where the ends of sentences and clauses are implied by the sentence structure. For example, pay special attention to the line "and whatever a sun will always sing is you." Not only does the line read as though it were the end of a sentence, but the following line must be read as the beginning of a new sentence, and a period is implicit at the end of the first stanza even though none is used. The line is thus end-stopped.

Why Do Writers Use Enjambment?

The effect that enjambment has on a line or an entire poem can vary, depending on the context. Here are a few of the reasons a writer may use enjambment in their poetry: 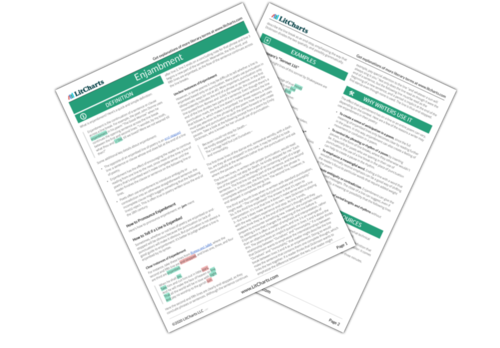