What is a rhetorical question? Here’s a quick and simple definition:

A rhetorical question is a figure of speech in which a question is asked for a reason other than to get an answer—most commonly, it's asked to make a persuasive point. For example, if a person asks, "How many times do I have to tell you not to eat my dessert?" he or she does not want to know the exact number of times the request will need to be repeated. Rather, the speaker's goal is to emphasize his or her growing frustration and—ideally—change the dessert-thief's behavior.

How to Pronounce Rhetorical Question

Though the percontation point has fallen out of use, modern writers do sometimes substitute a traditional question mark with a period or exclamation point after a rhetorical question. There is a lively debate as to whether this alternative punctuation is grammatically correct. Here are some guidelines to follow:

Rhetorical questions are easy to confuse with hypophora, a similar but fundamentally different figure of speech in which a speaker poses a question and then immediately answers it. Hypophora is frequently used in persuasive speaking because the speaker can pose and answer a question that the audience is likely to be wondering about, thereby making the thought processes of the speaker and the audience seem more aligned. For example, here is an example of hypophora used in a speech by Dwight Eisenhower:

When the enemy struck on that June day of 1950, what did America do? It did what it always has done in all its times of peril. It appealed to the heroism of its youth.

While Eisenhower asked this question without expecting an answer from his audience, this is an example of hypophora because he answered his own question. In a rhetorical question, by contrast, the answer would be implied in the question—to pose a rhetorical question, Eisenhower might have said instead, "When the enemy struck, who in their right mind would have done nothing to retaliate?"

When someone is pretending doubt for rhetorical effect, and uses a question as part of that expression of doubt, then the question is rhetorical. For example, consider this quotation from an oration by the ancient Greek orator Demosthenes:

I am at no loss for information about you and your family; but I am at a loss where to begin. Shall I relate how your father Tromes was a slave in the house of Elpias, who kept an elementary school near the Temple of Theseus, and how he wore shackles on his legs and a timber collar round his neck? Or how your mother practised daylight nuptials in an outhouse next door to Heros the bone-setter, and so brought you up to act in tableaux vivants and to excel in minor parts on the stage?

If the expression of doubt is earnest, however, then the question is not rhetorical. An example of aporia that is not also a rhetorical question comes from the most famous excerpt of Shakespeare's Hamlet:

To be or not to be—that is the question.
Whether ‘tis nobler in the mind to suffer
The slings and arrows of outrageous fortune,
Or to take arms against a sea of troubles,
And by opposing end them?

While Hamlet asks this question without expecting an answer (he's alone when he asks it), he's not asking in order to persuade or make a point. It's a legitimate expression of doubt, which leads Hamlet into a philosophical debate about whether one should face the expected miseries of life or kill oneself and face the possible unknown terrors of death. It's therefore not a rhetorical question, because Hamlet asks the question as an opening to actually seek an answer to the question he is obsessing over.

Rhetorical questions are particularly common in plays, appearing frequently in both spoken dialogue between characters, and in monologues or soliloquies, where they allow the playwright to reveal a character's inner life.

Rhetorical Questions in Shakespeare's The Merchant of Venice:

In his speech from Act 3, Scene 1 of Shakespeare's The Merchant of Venice, Shylock uses rhetorical questions to point out the indisputable similarities between Jews and Christians, in such a way that any listener would find him impossible to contradict:

I am a Jew. Hath not a Jew eyes? Hath not a Jew hands, organs, dimensions, senses, affections, passions? fed with the same food, hurt with the same weapons, subject to the same diseases, healed by the same means, warmed and cooled by the same winter and summer, as a Christian is? If you prick us, do we not bleed? if you tickle us, do we not laugh? if you poison us, do we not die? and if you wrong us, shall we not revenge? If we are like you in the rest, we will resemble you in that. If a Jew wrong a Christian, what is his humility? Revenge. If a Christian wrong a Jew, what should his sufferance be by Christian example? Why, revenge. The villainy you teach me, I will execute, and it shall go hard but I will better the instruction.

In this soliloquy from Act 2, Scene 2 of Romeo and Juliet, Juliet poses a series of rhetorical questions as she struggles to grasp the difficult truth—that her beloved Romeo is a member of the Montague family:

Thou art thyself, though not a Montague.
What's Montague? it is nor hand, nor foot,
Nor arm, nor face, nor any other part
Belonging to a man. O, be some other name!
What's in a name? that which we call a rose
By any other name would smell as sweet;
So Romeo would, were he not Romeo call'd
Retain that dear perfection which he owes
Without that title. Romeo, doff thy name,
And for that name which is no part of thee
Take all myself.

In this portion of her speech, Clinton argues that her opponent Donald Trump is not temperamentally fit to become president:

A president should respect the men and women who risk their lives to serve our country—including Captain Khan and the sons of Tim Kaine and Mike Pence, both Marines.
So just ask yourself: Do you really think Donald Trump has the temperament to be commander-in-chief?

Love has left even the best musicians of our time feeling lost, searching for meaning, and—as you might expect—full of rhetorical questions. Musicians such as Tina Turner, Jean Knight, and Stevie Wonder have all released hits structured around rhetorical questions, which allow them to powerfully express the joy, the pain, and the mystery of L-O-V-E.

Now because you wear all those fancy clothes (oh yeah)
And have a big fine car, oh yes you do now
Do you think I can afford to give you my love (oh yeah)
You think you're higher than every star above

Rhetorical Questions in "Isn't She Lovely" by Stevie Wonder

Stevie Wonder wrote "Isn't She Lovely" to celebrate the birth of his daughter, Aisha. The title is a perfect example of a rhetorical question, because Wonder isn't seeking a second opinion here. Instead, the question is meant to convey the love and amazement he feels towards his daughter.

Why Do Writers Use Rhetorical Questions?

Authors, playwrights, speech writers and musicians use rhetorical questions for a variety of reasons:

If when my wife is sleeping
and the baby and Kathleen
are sleeping
and the sun is a flame-white disc
in silken mists
above shining trees,—
if I in my north room
dance naked, grotesquely
before my mirror
waving my shirt round my head
and singing softly to myself:
"I am lonely, lonely.
I was born to be lonely.
I am best so!"
If I admire my arms, my face,
my shoulders, flanks, buttocks
against the yellow drawn shades,—

Who shall say I am not
the happy genius of my household?

The rhetorical question that concludes this poem has the effect of challenging the reader to doubt Williams' happiness—daring the listener to question this intimate, eccentric portrait of the poet's private world. By ending the poem in this way, Williams maintains a delicate balance. Throughout the poem, he draws the reader in and confides secrets of his interior life, but the question at the end is an almost defiant statement that he does not require the reader's approval. Rather, the reader—like the mirror—is simply there to witness his happy solitude. 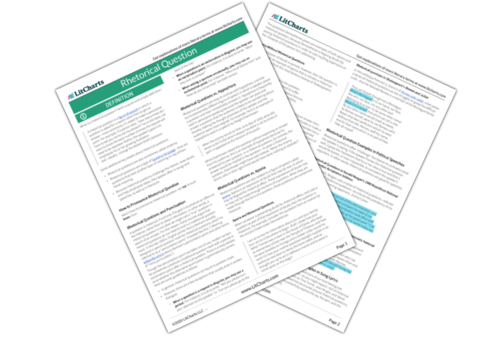