What is a soliloquy? Here’s a quick and simple definition:

Some additional key details about soliloquies:

How to Pronounce Soliloquy

Here's how to pronounce soliloquy: suh-lil-uh-kwee

Soliloquy vs. Monologue vs. Aside

Soliloquies, monologues, and asides are easy to confuse: they all involve a solitary speaker. However, there are fundamental differences between them based on both the length of the speech and who's listening to it.

Like a soliloquy, a monologue is a speech delivered by a single speaker. The difference between the two types of speech is its audience:

Putting that in practical terms: If other characters respond (or could respond) to a character's speech, or if a character is clearly addressing a specific person or people, then it cannot be a soliloquy.

An aside resembles a soliloquy in that only the audience—not the other characters onstage—can hear an aside. For instance, in this scene from Hamlet, Hamlet responds to his step-father Claudius calling him "my son" with an aside saying he's more related to his uncle than he'd like to be:

CLAUDIUS
Take thy fair hour, Laertes. Time be thine,
And thy best graces spend it at thy will.—
But now, my cousin Hamlet, and my son—

HAMLET
(aside) A little more than kin and less than kind.

Here Hamlet is speaking his own secret thoughts to himself in a way that other characters can't hear. However, asides are different from soliloquies because of their length. While there is no clear "word count" at which you can distinguish between an aside and a soliloquy, an aside is usually just a few words or lines, while a soliloquy is a longer speech. Here's Ferris Bueller delivering an aside.

Because they are records of a character thinking and not speaking, inner monologues are rare in dramas (as staging them would have to include some way to reveal a character's thoughts without that character speaking them, for instance through something like a voiceover delivered over a speaker).

Soliloquies and Breaking the Fourth Wall The idea also applies to television (despite the fact that television "stages" often don't have four walls at all), with the screen itself operating as the fourth wall. When an actor is said to "break" the fourth wall, he or she has in some way acknowledged that the wall exists and, therefore, that the play and its characters are fictions being observed by an audience. While there are a variety of ways to break the fourth wall, one of the most powerful is for the actor to address the audience directly.

A soliloquy does not always break the fourth wall, but it can if the character speaking is not just thinking to him or herself but is instead addressing the audience. For instance:

Soliloquies almost exclusively appear in drama, whether drama for the stage or for movies and television.

Shakespeare's soliloquies are often praised as the most powerful parts of his plays. Through soliloquy, he is able to show complicated characters who experience inner turmoil and conflicting thoughts. The soliloquies are also often the most dramatic and revealing moments in the plays, because through them characters reveal what is actually happening, or what they are actually feeling, which can sometimes conflict with the way people are behaving—and this makes for dramatic tension.

Soliloquy in A Midsummer Night's Dream

In Act 2, Scene 1 of A Midsummer Night's Dream, Puck delivers a soliloquy on his role with his master, the lord of the fairies, Oberon:

"I am that merry wandered of the night.
I jest to Oberon and make him smile
When I a far and bean-fed horse beguile,
Neighing in likeness of a filly foal:
And sometimes lurk I in a gossip's bowl,
In very likeness of a roasted crab,
And when she drinks, against her lips I bob
And on her wither'd dewlap pour the ale [...]"

Puck's character tends to push the narrative forward in this play, and this introductory soliloquy does just that. Instead of having to wait and see who Puck becomes, through interactions with other characters, the audience knows immediately who Puck is and we can begin to guess what Puck might do in the action to come.

Only because King Lear speaks through soliloquy (as he does here in Act 2, Scene 4) does the audience understand just how much his daughters' betrayal has devastated him.

"[...]Stain my cheeks! No, you unnatural hags,
I will have such revenges on you both,
That all the world shall—I will do such things,—
What they are, yet I know not: but they shall be
The terror of the earth. You think I'll weep
No, I'll not weep [...]"

His thoughts at the beginning of his soliloquy are sharp and lucid, but begin to quickly unravel. By the time he gets to the end, he doesn't even quite know what he will do, he just knows his actions will be "the terror of the earth." Through soliloquy, Shakespeare can communicate both Lear's thoughts and his very being, the fact that in addition to losing his power, and losing the love and esteem of his daughters, he is also losing his faculties.

Macbeth's soliloquy from Act 2, Scene 1 shows him grappling with a guilty conscience over his plan to kill the king and take power for himself. By revealing his inner thoughts as he tries to figure out if the dagger is or is not real, the soliloquy reveals not just his thoughts but the state of his mind:

"Is this a dagger which I see before me,
The handle toward my hand? Come, let me clutch thee.
I have thee not, and yet I see thee still.
Art thou not, fatal vision, sensible
To feeling as to sight? or art though but
A dagger of the mind, a false creation,
Proceeding from the heat-oppressed brain? [...]"

Later, he recovers himself and declares that this vision of a dagger is unreal. This progression—hallucination to recovery—tells the audience a good deal about Macbeth. He is nearly driven mad by the deed he is about to perpetrate: killing Duncan. But his ambition to be king wins out, even over the doubts that spring up within his mind.

While Shakespeare may have been the most famous user of soliloquies, other playwrights have also incorporated the device. Around the late 18th century, soliloquies fell out of favor. People wanted more realistic plays, and writers thought soliloquies sounded artificial. Although today they are rare, the soliloquy does persist and continues to be used by writers—of both plays for the stage and, sometimes, television and movies—intent on revealing the inner lives of their characters. Still, in modern dramas, soliloquies tend to not be as lengthy as Shakespeare's because even modern writers who use soliloquies continue to sense that audiences will reject lengthy soliloquies as too artificial.

Soliloquy in The Glass Menagerie by Tennessee Williams

The character Tom from The Glass Menagerie ends the play with this soliloquy, which summarizes some of the final events that have taken place off-stage, in addition to his thoughts:

"I didn't go to the moon that night. I went much further—for time is the longest distance between two points. Not long after that I was fired for writing a poem on the lid of a shoe-box. I left Saint Louis. [...]"

Tom speaks only to himself, reinforcing the notion that everything has fallen apart, and that, in a sense, the entire play has existed in his memory of a place and a family that he abandoned. To complete this idea for the audience, Williams had to reveal Tom's thoughts.

O'Neill's play begins with a long soliloquy by spoken by a character who is a writer named Charles Marsden:

"...I must start work tomorrow...I'd like to use the Professor in a novel sometime...and his wife...seems impossible she's been dead six years...so aggressively his wife!...poor Professor! now it's Nina who bosses him..."

Through this soliloquy, Marsden eventually reveals his ambiguous passion for Nina, and his conflicted feelings about sex in general. This happens gradually, as the soliloquy slowly takes us through Marsden's mind. This approach makes the reader feel as if they are in on a secret about Marsden. In a way, the soliloquy brings the reader into cahoots with Marsden, where they must then remain through the events of the play.

Soliloquy in House of Cards

In the television show, Frank Underwood occasionally directly addresses soliloquies to the camera after other characters have gone off screen. In these soliloquies, Frank reveals his thoughts on life and power, and his plans for gaining power for himself. Frank's soliloquies are reminiscent of Iago's in Othello, in that both characters relish their ability to manipulate and understand situations better than others, and they share that enthusiasm directly with the audience. Their soliloquies therefore create dramatic irony, as the audience knows what Frank and Iago are thinking and planning while the other characters don't. But the soliloquies also serve to make the audience complicit with Frank and Iago; even as the audience might judge Frank's power-hungry schemes, it relishes those schemes right along with him.

Finally, House of Cards is certainly aware of the similarity between Frank's soliloquies and Iago's, and the show's use of soliloquy is a purposeful effort to include Frank among the tradition of great schemers of which Iago is such a huge part.

You can watch a classic Frank Underwood soliloquy here.

Why Do Writers Use Soliloquies?

Soliloquies offer a variety of different possible effects, regardless of whether they are being used in a Shakespearean play or a more modern drama. 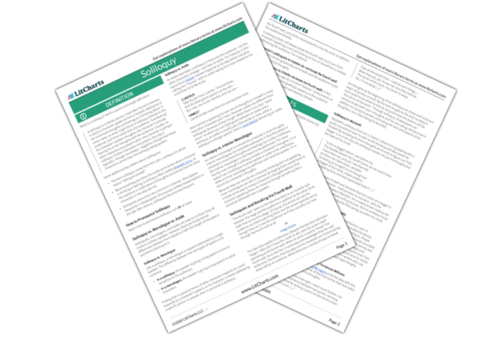