What is an envoi? Here’s a quick and simple definition:

An envoi is a brief concluding stanza at the end of a poem that can either summarize the preceding poem or serve as its dedication. The envoi tends to follow the same meter and rhyme scheme as the body of the poem, but nevertheless it remains distinct from the rest of the poem, much like an epilogue in a book. The specific length and rhyme scheme of an envoi depend on the type of poem in which they appear. The most popular poetic forms in which envois appear are ballades and sestinas.

Some additional key details about envois:

Here's how to pronounce envoi: on-voy or en-voy (both are acceptable, but the first is truer to the original French pronunciation)

The Origin of Envois

The tradition of including envois at the ends of poems originated in Medieval France, where troubadours (traveling poet/musicians) and other performers would often conclude their performances of lyric poetry with a direct address to the listener—that listener was often a royal patron, such as a prince. Based on this convention, it soon became common for poets to address the envois of their poems to princes. Over time, it also became common to address envois to friends or lovers, or whomever else would have made sense in the context of the poem.

Envois are commonly used in several different poetic forms—ballade, sestina, chant royal, and virelai nouveau—all of which originated in Medieval France as forms of lyric poetry set to music and performed by troubadours.

A ballade is a fixed verse form of poetry that follows a strict rhyme scheme of ABABBCBC, and typically has three eight-line stanzas followed by a four-line envoi with a rhyme scheme of ABAB. The last line of each stanza in a ballade—the refrain—is always the same. Of all the forms that have envois, ballade is by far the most common.

Christine de Pisan was an important practitioner of the ballade in 14th century France. The envoi of this poem follows the traditional formula for ballades, using an ABAB rhyme scheme, repeating the refrain, and sticking to the iambic pentameter of the preceding poem. The envoi is italicized in order to help you easily identify it. The poem's refrain is also bolded in each stanza where it appears.

My lady, and my sovereign, flower most rare,
In whom honour and worth are glorified,
Fountain of all things wise, gracious, and fair ;
Who art my way toward virtue, and the guide
That over all my goings dost preside ;
Lady, to whom humbly is vowed my fate,
Serving in that sweet service at thy side,
All of my days to thee I dedicate.

How else, since none could with thyself compare?
Thou Beauty filled with sweetness, O provide
Ensample kindling me to do and dare,
And bring my ship in honour's port to ride!
So sweet my joy, Lady, it cannot hide;
Therefore, in my simplicity elate,
Out of my heart and body have I cried;
All of my days to thee I dedicate.

Most noble Duchess, surely the hours prepare
That time, when thou shalt well be certified
How my heart serves thee with its every prayer.
Then shall my life be brimmed and satisfied,
When thou its full devotion having tried
Know'st it all truth; O honour's path and gate!
Fame's flowering tree! O valour's starry guide!
All of my days to thee I dedicate.

Princess, who dost in power and praise abide,
Early I learnt to love thee; and love, being great,
Lifts up my heart above all thought of pride,
All my days, a', to thee I dedicate.

Envoi in Austin Dobson's "On a Fan"

Austin Dobson was a 19th century English poet who was keen on French forms like the ballade. The envoi (marked below with italics) in this ballade is atypical for a ballade in two ways: it is not addressed to anyone, but rather it acts as a summary, and it is missing a final line, leaving the concluding stanza just three lines long with a rhyme scheme of BCB. Also note how the final line is a playful variation on the poem's refrain.

Chicken-skin, delicate, white,
Painted by Carlo Vanloo,
Loves in a riot of light
Roses vaporous and blue
Hark to the dainty frou-frou!
Picture above, if you can,
Eyes that could melt as the dew,—
This was the Pompadour's fan!

See how they rise at the sight,
Thronging the oeil de boeuf through,
Courtiers as butterflies bright,
Beauties that Fragonard drew,
Talon-rouge, falbala, queue,
Cardinal, Duke, —to a man,
Eager to sigh or to sue,—
This was the Pompadour's fan!

Ah, but things more than polite
Hung on this toy, voyez-vous!
Matters of state and of might,
Things that, may be, overthrew
Those in whose brains they began;
Here was the sign and the cue,—
This was the Pompadour's fan!

ENVOI
Where are the secrets it knew?
Weavings of plot and of plan?
—But where is the Pompadour, too?

Swinburne's "The Cliffside Path" is a variant of a ballade called a ballade supreme. Below is the final stanza of the poem, followed by the envoi, which is addressed simply to "friend." The envoi (italicized below) follows a CCDCD rhyme scheme (typical for a ballade supreme) and repeats the refrain in its final line.

Yet may sight, ere all the hoar soft shade grow brown,
Hardly reckon half the rifts and rents unhealed
Where the scarred cliffs downward sundering drive and drown,
Hewn as if with stroke of swords in tempest steeled,
Wielded as the night's will and the wind's may wield.
Crowned and zoned in vain with flowers of autumn-tide,
Soon the blasts shall break them, soon the waters hide,
Soon, where late we stood, shall no man ever stand.
Life and love seek harbourage on the landward side:
Wind is lord and change is sovereign of the strand.

Friend, though man be less than these, for all his pride,
Yet, for all his weakness, shall not hope abide?
Wind and change can wreck but life and waste but land:
Truth and trust are sure, though here till all subside
Wind is lord and change is sovereign of the strand.

A sestina is an unrhymed fixed verse form consisting of six sestets (stanzas of six lines), followed by an envoi of three lines. The final word of each line of the first stanza is repeated in each stanza throughout the poem at specified intervals, and these same six words are repeated again in the envoi (we've marked the words with highlights and italicized the envoi to help you identify them). After ballade, sestina is the most common form in which envois are used. They have been written in dozens of languages and continue to be written quite commonly today.

Because sestinas are rather long, this example from John Ashbery's "The Painter" shows just the final stanza of the poem as well as the envoi. Note how the envoi serves a formal function (as it contains repeated words from all the previous stanzas in a specified order) but it also serves as a conclusion to the poem, tying its themes together. The envoi in a sestina does not, traditionally, have an addressee.

Others declared it a self-portrait.
Finally all indications of a subject
Began to fade, leaving the canvas
Perfectly white. He put down the brush.
At once a howl, that was also a prayer,
Arose from the overcrowded buildings.

They tossed him, the portrait, from the tallest of the buildings;
And the sea devoured the canvas and the brush
As though his subject had decided to remain a prayer.

Another famous example of sestina is Elizabeth Bishop's "Sestina." In this example, the final stanza of the poem as well as the envoi are excerpted. Once again, the envoi functions as a kind of conclusion to the sestina.

But secretly, while the grandmother
busies herself about the stove,
the little moons fall down like tears
from between the pages of the almanac
into the flower bed the child
has carefully placed in the front of the house.

Time to plant tears, says the almanac.
The grandmother sings to the marvelous stove
and the child draws another inscrutable house.

The chant royal is a poetic form that uses a rhyme scheme of ABABCCDDEDE. Chant royals usually consist of five eleven-line stanzas followed by an envoi of five or seven lines. The envoi has a rhyme scheme of DDEDE or CCDDEDE. The chant royal form was first used by the 14th century French poets Christine de Pisan and Charles d'Orléans, and was barely used again until 19th century English poets like Austin Dobson found a renewed interest in Medieval French forms and began using it in their own poetry.

Austin Dobson's "The Dance of Death"

This example is an excerpt from a chant royal written by the poet Austin Dobson. Only the poem's final stanza and envoi are shown here. The seven-line envoi, in typical chant royal fashion, uses a rhyme scheme of CCDDEDE and repeats the poem's refrain.

He hath no pity. For the new-made Bride,
Blithe with the promise of her life's delight,
That wanders gladly by her Husband's side,
He with the clatter of his drum doth fright.
He scares the Virgin at the convent grate;
The Maid half-won, the Lover passionate;
He hath no grace for weakness and decay:
The tender Wife, the Widow bent and gray,
The feeble Sire whose footstep faltereth,—
All these he leadeth by the lonely way . . .
There is no King more terrible than Death.

ENVOI
Youth, for whose ear and monishing of late,
I sang of Prodigals and lost estate,
Have thou thy joy of living and be gay;
But know not less that there must come a day,—
Aye, and perchance e'en now it hasteneth,—
When thine own heart shall speak to thee and say,—
There is no King more terrible than Death.

Quite a rare form in English, one of the virelai nouveau's defining features is its use of only one or two rhymes throughout the entire poem. The virelai nouveau begins with two lines that are then repeated throughout the poem as refrains, until the same two lines finally reappear in as an envoi at the end of the poem, usually in reverse order of their original appearance. In this form of poetry, the envoi doesn't have a specified length.

One of the very few English examples of a "virelai nouveau," Austin Dobson's "July" is slightly atypical in that it does not invert the order of the poem's first two lines in the final lines of the envoi. The poem has but a single rhyme. It begins:

So Phillis, the fawn-footed, hie
For hansom. Ere close of the day
Between us a "world" must lie,—
Good-bye to the Town! —good-bye!
Hurrah for the sea and the sky.

Why Do Writers Use Envois?

Traditionally, envois were used by poets and musicians to address their audience directly and indicate that their poem or song was coming to an end. Over time, though, new variations on the poetic forms in which envois appear led to an expansion of the envoi's purpose. For instance, an envoi may now be used to draw an end to a poem by invoking some of the themes or words that the poem focused on, thereby creating a feeling of closure or resolution to the poem. Generally speaking, however, poets do not choose to write envois for any of these reasons alone, but rather because they have chosen to write in a form which dictates that an envoi should appear at the end (such as a ballade or a chant royal). In that sense, the choice to use an envoi is a decision that is dictated, first and foremost, by the writer's reasons for having chosen to write in that particular poetic form. 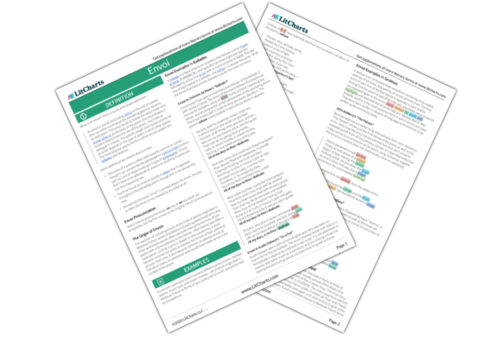