What is a spondee? Here’s a quick and simple definition:

A spondee is a two-syllable metrical pattern in poetry in which both syllables are stressed. The word "downtown" is a spondee, with the stressed syllable of "down" followed by another stressed syllable, “town”: Down-town.

Some additional key details about spondees:

How to Pronounce Spondee

Here's how to pronounce spondee: spon-dee.

In order to understand spondees better, it’s helpful to have a strong grasp of a few other literary terms related to poetry. We cover each of these in depth on their own respective pages, but below is a quick overview to help make understanding spondees easier.

Because it's essentially impossible to write anything using only stressed syllables, the spondee is never the primary foot in any poem—the foot that makes up the majority of a poem of metered verse. But poets do sometimes use the spondee as an "irregular foot," a foot that appears as a kind of "change of pace" in a poem based on a different foot, such as an iambic meter.

The word "spondee" comes from a Greek and Latin word associated with offering a drink or a toast, synonymous with the verbs "to engage oneself" and "to promise." It follows, then, that the unusual stressed-stressed pattern of the spondee (da-dum) is used to engage the reader, to create emphasis on certain words, and to stir emotion. In the examples below, we’ve highlighted the stressed syllables of spondees in red (normally we highlight unstressed syllables in green, but because by definition, no unstressed syllables can be part of a spondee there are no green highlights).

Perhaps the most well-known example of spondaic meter comes from Lord Alfred Tennyson's poem "Break, Break, Break." Tennyson wrote the poem as an elegy after the death of his friend and fellow poet, Arthur Hallum. Each stanza of the poem begins with a spondee, creating a rhythm that mirrors both the crashing of waves and the relentless heartache of mourning.

Break, break, break,
On thy cold grey stones, O Sea!
And I would that my tongue could utter
The thoughts that arise in me.

Spondees in Shakespeare's "Troilus and Cressida"

"Troilus and Cressida" was written, like so many of Shakespeare's plays, in iambic pentameter. However, in this passage Shakespeare substitutes spondees for iambs to highlight the news that the city of Troy is burning, introducing a feeling of panic and alarm.

Notice how, although two spondees have been substituted for two iambs at the beginning of the sentence, the line is still in iambic pentameter because it retains ten syllables and is primarily made of iambs (it's three iambs and two spondees).

Gerard Manley Hopkins wrote this poem in praise of God for having created all things beautiful on earth. In these, the final lines, the poet makes heavy use of spondees to create a feeling of growing excitement.

With swift, slow; sweet, sour; adazzle, dim;
He fathers-forth whose beauty is past change:
Praise him.

Notice how nearly every word of the first line receives its own emphasis, making each adjective in the list seem more vivid and heavy with meaning.

John Milton wrote "Samson Agonistes" about one of the Bible's most iconic figures, Samson. In the following passage, as Samson is lamenting his dark fate, Milton makes use of spondees to accentuate the stormy emotional state of Samson's dramatic monologue.

O dark, dark, dark, amid the blaze of noon,
Irrecoverably dark, total eclipse
Without all hope of day!

Why Do Writers Use Spondees?

As a spondee's pattern of emphasis is so unnatural in the English language, whole poems are not written in spondees. Instead, spondees appear almost exclusively as irregular feet inside lines or verses whose primary meter is something else, such as iambic meter. A writer might insert a spondee to create emphasis, or simply to accommodate a word whose stress pattern doesn't adhere to the predominant metrical pattern of the poem. However, the stressed-stressed pattern of spondees, when they appear in the midst of more common feet, can have a striking effect. Therefore, spondees are often used to highlight moments of crisis or rapture in a text with an otherwise consistent stress pattern, since the double-stressed syllable of the spondee has a way of sticking out to the ear. Spondees often appear in passages in which the speaker is in a state of heightened emotion—no matter whether the emotion is one of reverence, as in Hopkins's "Pied Beauty," or of grief, as in Tennyson's "Break, Break, Break." 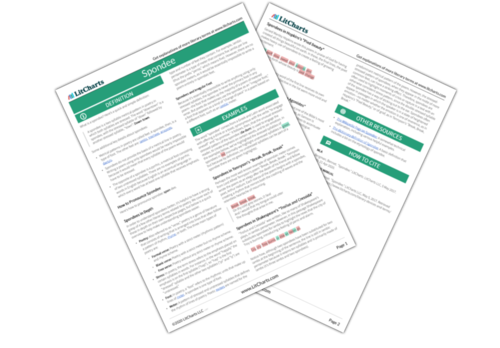